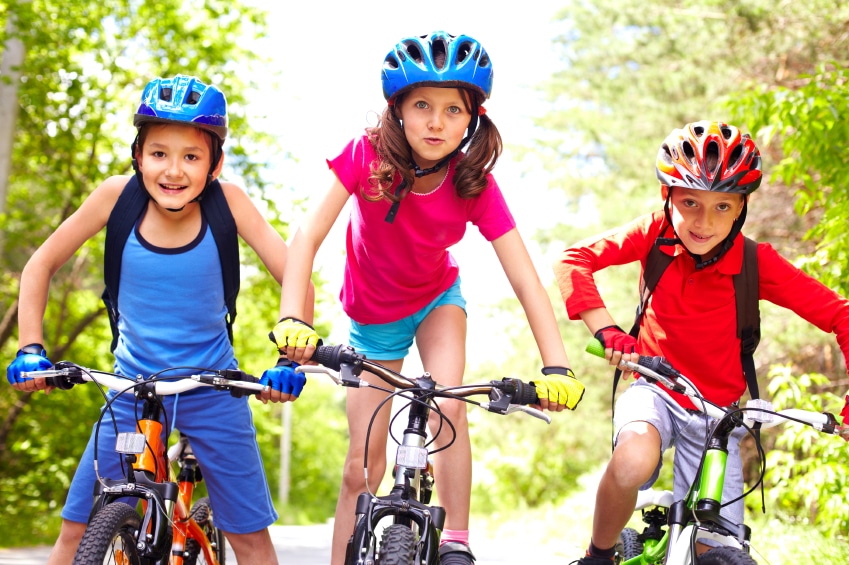 There’s no doubt about it – children love bikes! From tiny trikes to snazzy scooters, cycles represent fun, fresh air and exercise and a free activity you can do in Brisbane with kids. As kids get older, bikes become their preferred form of transport so it’s a great idea to encourage safe riding skills from an early age. Luckily Brisbane has a host of kid friendly cycle paths which you can enjoy as a family for fitness and pleasure. Kid friendly cycle paths should be free from safety hazards, not overly strenuous to ride along and nearby basic amenities. Here’s our list of must-do cycle paths in Brisbane!

This Brisbane cycle path starts at Woolcock Park in Red Hill, which features an unusual sensory playground, barbecues and a modern amenities block. From here, the 6-7km return trip follows the creek, so ducks and water dragons are likely guest stars on your ride. The cycle path is shaded by trees for much of the way and avoids traffic, except from one short section on a quiet side road.

It is an easy ride for all abilities, but energetic kids may enjoy ripping up a small trail bike area which appears around the half-way mark.

The Redcliffe Peninsula, just north of Brisbane, features cycle paths that span approximately 40 km and run almost uninterrupted along its foreshore along some of the best parks and playgrounds in Brisbane’s north. Some sections of this cycle path network, however, are more kid friendly than others. Known as the ‘southern rim ride’, the Clontarf to Woody Point section is a flat, 11km return trip running between the Ted Smout Bridge and the Woody Point jetty.

Along with pristine bay views, this seaside ride passes an informative visitors’ centre, several amenities blocks, barbecue areas, fish and chip shops and playgrounds. The area hosts sports clubs including jet ski groups and kite flyers, and kids will be entertained by the periodic arrival of sky divers!

Brisbane may not be famous for its beaches, but it does offer many lovely seaside cycle paths. Commencing at Waterloo Esplanade in Wynnum, this 10km return trip runs along the shoreline all the way through to the Manly marinas.

Whether you start or finish at the Wynnum end, the big attraction here is the Wynnum Water Park, which includes a wading pool and an ‘aquativity’ space, where sculptured whales squirt water high into the air like a giant backyard sprinkler.

At Manly, kids can be rewarded for their ride with some yacht spotting and a bite to eat at one of the area’s many cafes and chip shops. There are picnic shelters, playgrounds and amenities blocks dotted along the ride.

This is a short (4km) but action-packed ride taking in creek life and the bustling Northey Street City Farm. Located just north of Brisbane city, this cycle path starts at the end of Bishop Street where the road becomes an open reserve. From there, follow the shady trail along Enoggera Creek (watch for lizards and ducks!) until it joins up with the Bowen Bridge Heritage Trail.

The Heritage Trail includes a rainforest grove, sculptures and pieces of art that you and your Brisbane kids can enjoy spotting amidst the trees. Finish your ride at the Farm, an active urban growing space where kids can inspect the veggie patches and visit the chickens. On Sundays, this becomes a bustling market with organic bread, coffee, and produce for sale.

Starting at Orleigh Park ferry terminal, this cycle path follows the gentle curves of the Brisbane river taking in views across to Toowong and St Lucia and finishing under the William Jolly Bridge at South Brisbane.

The park land along the river front includes playgrounds, amenities blocks and barbecue areas and are home to several Brisbane sporting clubs, so your Brisbane Kids might spot some rowing or sailing action as they ride.

The cycle path runs through Davies Park, which hosts a lively Saturday flea market, and there are coffee shops a-plenty nearby.

Turn this ride into a day trip by incorporating a ferry ride or spending some time at Southbank. Check the Brisbane City Council website for instructions on how to take bikes on public transport.

Beginning on the Esplanade at Flinders Parade in Sandgate and finishing at the Shorncliffe Jetty, this cycleway covers around 6km of both flat and slightly hilly paths. Whilst this route does include some residential street riding, the majority is comprised of bike and walking paths that are dotted with some gorgeous ocean-front views and historical landmarks along the way.

Places to enjoy along the way include Sandgate Swimming Pool, Lower Moora Park and Shorncliffe Jetty.

Cycle through calming bushland on this sealed bikeway that stretches from McDowall to Bracken Ridge. Passing through Aspley, Carseldine and Fitzgibbon, Cabbage Tree Creek Bikeway is predominantly off-road and presents a quiet ride with several places to pause and explore.

There are many parks to stop at along the way, including Beckett Road Park and Philip Vaughan Park, along with the Carseldine Markets to check out on Saturdays. At the end of the route is Emily Seebohm Aquatic Centre and Bracken Ridge BMX Track – one of Australia’s largest, custom-built BMX tracks.

Running west to east, Kedron Brook Bikeway has some great sections for families to explore. Stretching for almost 20km, there are several places to begin and end this ride within Everton Park, Stafford, Grange, Gordon Park, Lutwyche, and Kedron.

These are just some of the many Brisbane cycle paths which are perfect for a day out with your family and friends. Many bikeways link to other bike paths and larger bikeways as well, so you really could spend several weekends exploring them all—energy permitting!

Of course there are numerous other bike paths in Brisbane for Kids- feel free to note them in the comments below.

3 responses to “Best Bike Paths For Kids in Brisbane”