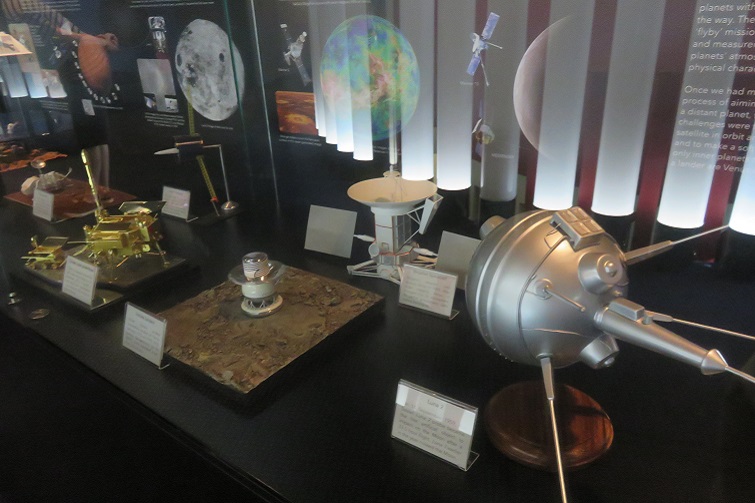 The Lord Mayor Brisbane explains the focus of the Planetarium – “From the launch of the first artificial satellite Sputnik, to the magnificent lunar landings, robotic exploration of the Solar System and privately operated space flights – the Planetarium offers a fascinating look at space history.”.

He encourages everyone to visit the Planetarium, in order to “enjoy a show in the Cosmic Skydome, take a tour of Brisbane’s current night sky with one of our astronomers or visit the Planetarium’s Display Zone to take an astronomical journey from the present day Solar System to the time of the Big Bang.”

The Sir Thomas Brisbane Planetarium has many exciting attractions for visitors including: As you enter the Foyer, you’re first greeted by what appears to be a life-sized astronaut, but what is in fact a famous replica of Neil Armstrong’s Apollo spacesuit. There are also other interesting items on display in this area, from fragments of asteroids to models of spacecraft, all presented within most children’s viewing level. There are many informative displays at the Planetarium relating to stars, planets and space exploration. You can see a full-size reproduction of Neil Armstrong’s spacesuit, models of spacecraft and fragments of asteroids.

You can learn about the scale of the solar system and the vastness of the universe, as well as the space programs of many nations. There are interesting artifacts, colourful pictures, lots of information and interactive touchscreen displays to engage the kids. There is also a mini theatre showing short feature shows. Entry to the Planetarium is FREE, so everyone can enjoy these informative displays at no cost. This is worth knowing especially if you are heading to the Botanic Gardens and you are wondering if it is worth the short walk next door the planetarium- the answer is yes! The Gallery wraps around the perimeter of the Cosmic Skydome and features several displays, leading you past the Earth and our solar system, to the Milky Way and beyond.  There are also interactive touchscreen displays to grab the attention of Brisbane Kids, allowing them to look at planets and moons from any desired angle. This zone also features photos from the Hubble Space Telescope, as well as a statue of Sir Thomas Brisbane himself.

The Mini Theatre is also open free to the general public and works on a walk-in walk-out system, where short feature shows are presented continuously. This is great for younger children who may not be able to sit still for too long, and provides a wonderful educational experience for the more die-hard mini astronomer. These feature shows cover a variety of astronomical topics and give Brisbane Kids the chance to even see images from real space missions. The Brisbane Planetarium centres around the Cosmic Skydome, which is one of the most exciting features of the planetarium. Renovated along with the other display areas in 2013, the Cosmic Skydome is a circular theatre where the audience lie back on reclined theatre seats to watch shows that are projected by a state-of-the-art optical star projector onto the huge domed ceiling, giving you a 180º view of the action, the night sky and outer space! This amazing surround-screen provides a really unique and immersive experience for kids and adults alike, and the shows surround the audience in an educational and entertaining way, often taking you on outer-space adventures. There is an admission cost for shows in the Cosmic Skydome. You can click here to see ticket prices and to book.

Shows at the Planetarium

There are so many child friendly shows on offer at the Sir Thomas Brisbane Planetarium there’s bound to be something to suit all kids! Several of the Planetarium’s shows are suited to children, while others are great for more advanced astronomers. Most shows are under an hour and are followed by a Night Sky Tour in which Brisbane’s night sky is projected all around you so you can see for yourself the planets, constellations and other exciting real-life features of space. Showings run throughout the week and at weekends, and are frequent in the school holidays. Bookings are required for Cosmic Skydome shows. Visit The Sir Thomas Brisbane Planetarium website for more details.

Current Children’s Shows at the Planetarium include:

Here is a trailer for ‘Perfect Little Planet’.

These shows last approximately 45 minutes and are suitable for children over the age of 6. Current General Audience Shows at the Planetarium include:

Due to ongoing restrictions, BOOKINGS ARE REQUIRED for all Cosmic Skydome shows. Please also note there is no late entry to the Skydome once a show has started.

The Galaxy Gift Shop is a one-stop destination when looking for a gift for your budding astronomer. The shop sells a wide range of astronomy and general science items, including star charts, books, project kits and models. The Observatory at the Brisbane Planetarium contains telescopes that are used by the resident astronomers for research and demonstration purposes. On selected Saturday evenings (subject to weather conditions), the Planetarium hosts demonstrations where the general public can find out more about the universe in which we live. The Observatory is unfortunately not wheelchair accessible and a minimum height restriction of 150cm applies. Contact the Planetarium directly for more information regarding these nights.

Planetarium Visit and Show — Our Review

We recently headed to the Sir Thomas Brisbane Planetarium to check out what was on offer and to watch a show. The displays in the Display Zone immediately captured the interest of the kids, peering into the display cabinets and asking lots of questions about the artefacts. The Gallery led us on an exploration through space, and even the adults were quite blown away by the reality of the scale of our universe and our tiny place within it.

While some of the information was beyond the level of the kids, the pictures and the interactive touchscreens certainly grabbed their attention. We also enjoyed exploring the gift shop and found some great educational books to help the kids to learn more about space.

The highlight of our visit to the Planetarium was watching a show in the Cosmic Skydome. With our youngest being 3, we opted for the children’s show ‘Tycho to the Moon’. The projection of the movie on the screen above and around you was amazing and had everyone swivelling their heads to take in everything they could spot.

The animated film followed a fun story of a dog that heads into space in a spacekennel and gets to bounce around on the moon before trying to make it home without crashing into the hot sun. The storyline is engaging, even for slightly older kids, and as an adult, I was blown away by the immersive view and the experience of seeing the stars and planets and Earth from a distance in a very realistic way.

We were also fascinated by the Night Sky Tour. The 180º view of the night sky was impressively realistic, down to the twinkling of the stars and the brightness of the planets. The presenter helped us to spot planets and identify constellations, zooming in on interesting parts to give us a close-up view of the rings of Saturn and the craters of the moon. It was also great to know that the view was the same as the night sky over us at the moment, so that we could head out into the yard at night and easily spot all the cool features we’d learned about. While this part didn’t seem to hold younger kids’ attention so well, it was certainly a impressive and informative inclusion, and the presenter was available afterwards for questions too.

Overall, we had a great day out at the Planetarium and topped it all off with a trip to the Botanic Gardens and ice cream in the cafe! 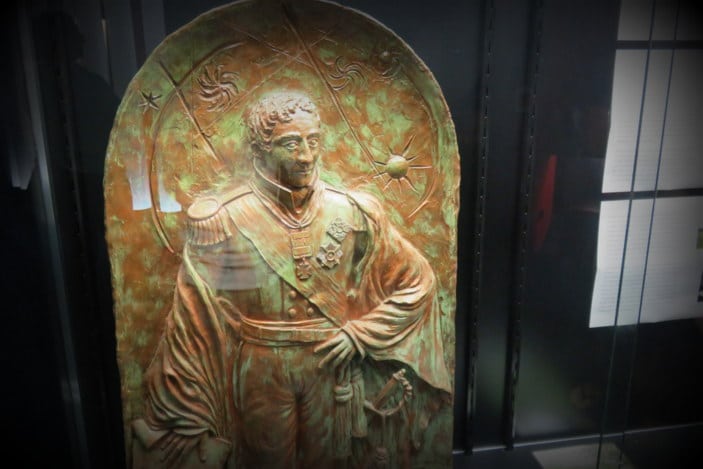 Who is Sir Thomas Brisbane?

Sir Thomas Brisbane was born and raised in Scotland. He was a keen astronomer and studied astronomy and mathematics at the University of Edinburgh. He had a distinguished career in the British Army, rising to the rank of Major-General, serving under the Duke of Wellington and leading brigades in major conflicts of the early 1800s. In 1821, on the advice of Wellington, Sir Thomas Brisbane became the Governor of New South Wales. While Governor, he pursued his love of astronomy, building Australia’s first observatory, located at Paramatta. He also forwarded advancements in science and agriculture. In 1823, Brisbane launched a search for a site for a new convict settlement, which was then named after him as the city of Brisbane. Sir Thomas Brisbane returned to Scotland in 1825, where he continued his interest in science and astronomy and did valuable astronomical research. 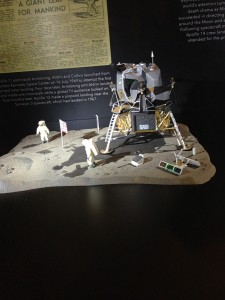 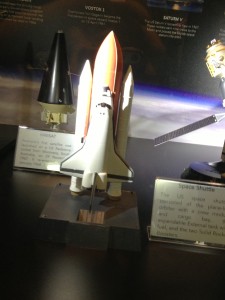 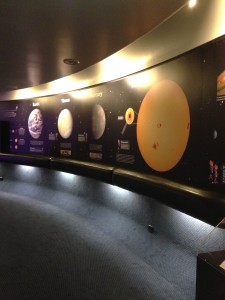 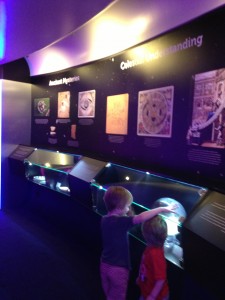 Check out our related posts below for other ideas to nurture your Brisbane Kid’s inner astronomy or science buff.