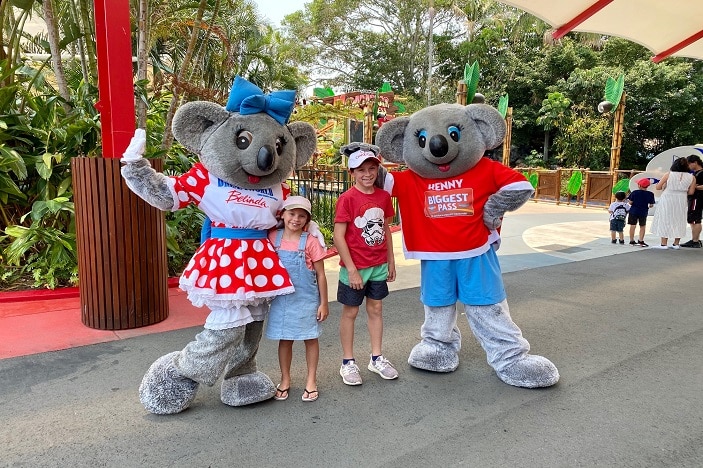 For almost 40 years, Dreamworld at Coomera on the Gold Coast has been a popular theme park for families, with people travelling from all over the country to visit. Brisbane Kids are fortunate to have Dreamworld, Australia’s biggest amusement park, right on their doorstep! There’s something for all ages – shows to watch, rides suitable for toddlers through to teenagers, animals to meet and a variety of eateries spread over 85 hectares.

What Rides are at Dreamworld?

Dreamworld has many rides across several themed areas of the park which can be broken down into kids’ rides, family rides, thrill rides and waterslides. 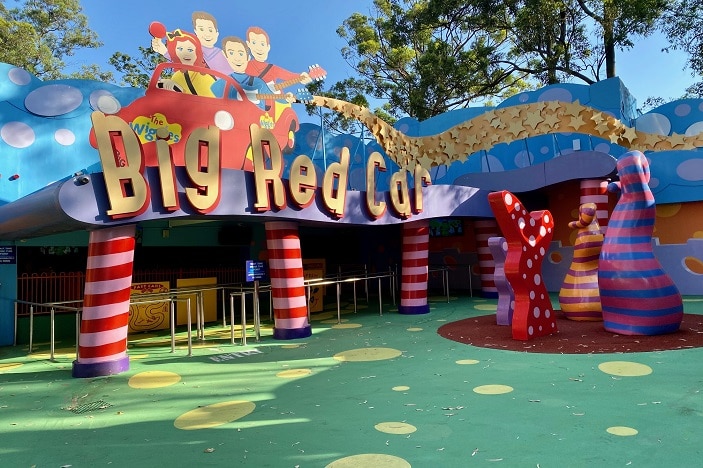 You can find rides that are suitable for younger children at two main locations within the park: in the ABC Kids World/Wiggles World area and in the Dreamworks experience area. It was recently announced that there will be a multi-million dollar refurbishment of the ABC Kids/Wiggles World area, which will be welcome as the space is looking a little tired. Until then, you can enjoy the following attractions in this area that only offer a mild thrill level, perfect for the youngest members of the family:

The other area that offers rides suitable for younger kids is in the Dreamworks experience area. In this vibrant space, which is themed around Dreamworks’ Kung Fu Panda, Madagascar and Shrek films, kids can try out the following rides: 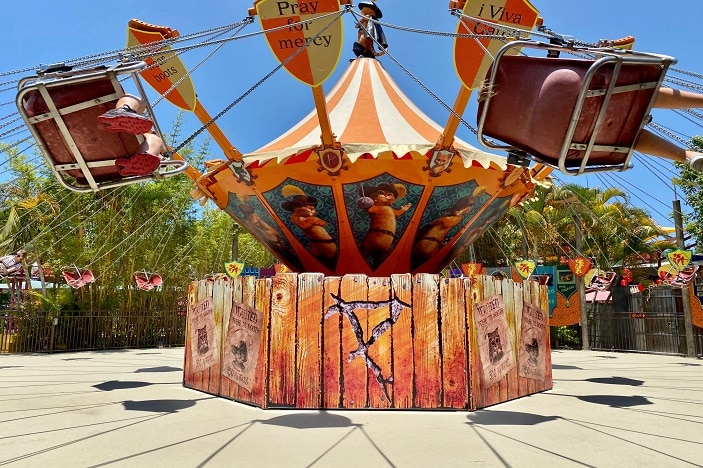 For families with kids that are a little older, there are a number of rides that are suitable for the whole family in the Dreamworks experience area and dotted around the wider park. For those parents that can remember going to Dreamworld themselves as kids, there are still the vintage cars – classic cars on a track that only require a pedal to “drive”. They are located right down at the back of the park within the Dreamworld Corrobboree area and it’s fun to watch a new generation of kids pretending to drive.

Another old school attraction that still operates is the Dreamworld Express Train, which winds its way through the park and is great for tired little legs.

One of the newest rides at Dreamworld is the Sky Voyager which has permanently replaced the old IMAX theatre. This is a fantastic ride which suspends you above a giant dome screen and adds special effects to make you feel like you’re in the film. The footage shows all Australian locations, and you really feel like you are flying above a mob of kangaroos in the outback or sailing over Sydney Harbour on new year’s eve. Get in early for this one (it’s located very close to the entry) as it is a popular attraction and you may have to queue for around 45 minutes during peak times.

In the Ocean Parade area is the Shockwave – a family-friendly ride with a moderate level of thrill for the more adventurous (it reaches speeds of 54 km). And finally, there are four family-friendly rides/attractions to be found in the Dreamworks Experience area: 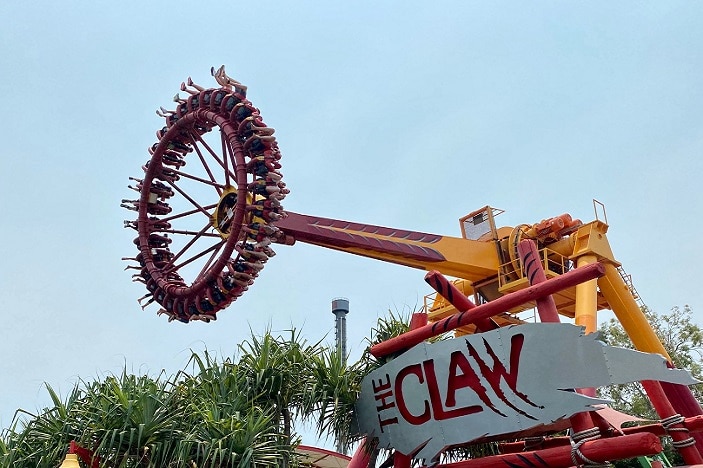 If you’re daring enough (and tall enough) there are a number of high thrill rides that many will love, especially teenagers and young adults. Currently, there are the “big 7 thrill rides”, although there are plans for new rides in the near future. You can check out the big 7 thrill rides (listed below) on the Dreamworld website for more information: 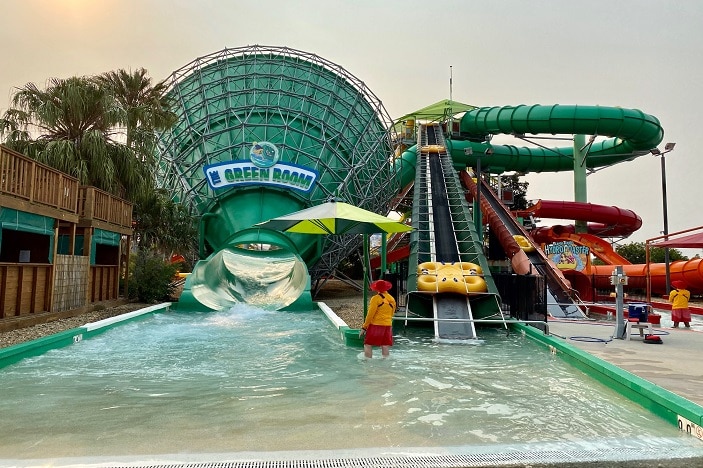 Whitewater World can be accessed from within Dreamworld (right next to the FlowRider surfing simulator) and has an amazing array of water slides and pools for all ages. You can read our full review of WhiteWater World. 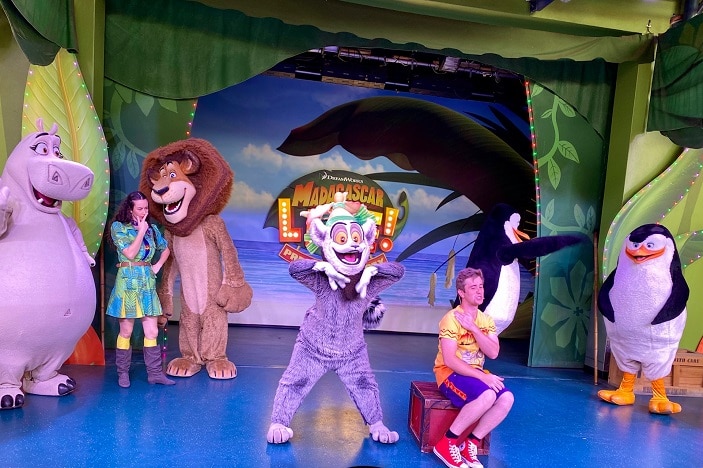 What Shows are at Dreamworld?

Dreamworld offers a lot of shows for kids at all different locations around the park, so it’s worth picking up the current timetable at the entry, along with a park map, to help plan your day. Just a few of the shows you can expect to see are: Wiggly friends show, Madagascar live show, Kenny and Belinda Koala’s circus show, Australian sheep shearing show and the Corrobborree creation story and virtual reality experience. After every show, there’s also the chance to meet the characters and have a photo taken with them. 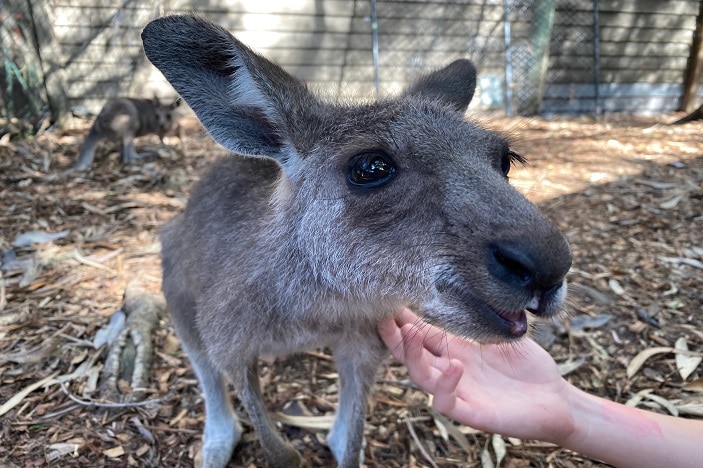 What Animals are at Dreamworld?

This is an often overlooked area of Dreamworld, but the zoo section, within the Corroboree precinct is well worth spending time in. Queensland and South Australia are the only two states in Australia where you can legally cuddle a koala, and Dreamworld offers a photo experience with one of Australia’s most loved animals. The koalas only “work” for a maximum of 30 minutes per day, and for no more than three days straight – not bad working conditions!

The other Aussie animals you can expect to see include tree kangaroos, bilbies, dingos, emus, crocodiles, sheep, wombats, cassowaries, a wedge-tailed eagle and kangaroos you can feed (kanagroo food available to purchase). There are numerous animal experiences that you can book for an extra charge, such as feeding a croc or patting a dingo. A percentage of funds raised in the Dreamworld Corroboree area goes towards providing practical assistance to threatened and endangered species in the wild. There are also educational talks about the animals throughout the day – refer to the daily timetable for up-to-date talk times. 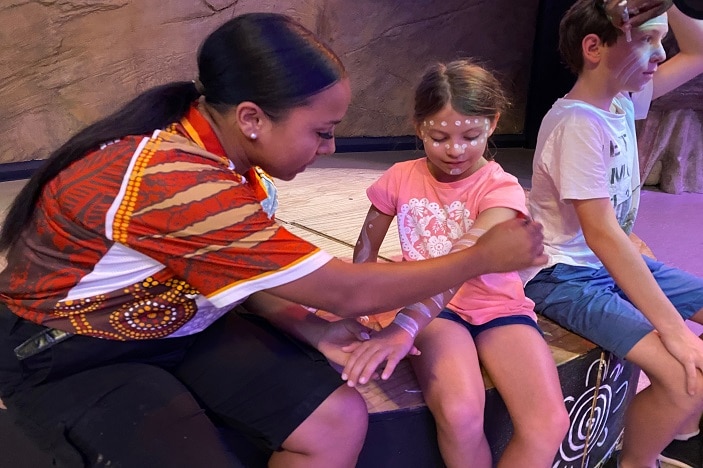 This is truly the most under-rated part of the park. In the Dreamworld Corroboree area you can learn so much more about Australia’s indigenous culture in a way that is fun, interactive and engaging, even for young children. Their new virtual reality experience uses modern technology to tell ancient stories, and you really feel like you’re part of the action. You’ll learn about the Gold Coast’s creation story, and there are also daily talks about weapons, fire-making, indigenous music, and cultural face painting, with every drawing telling a story. 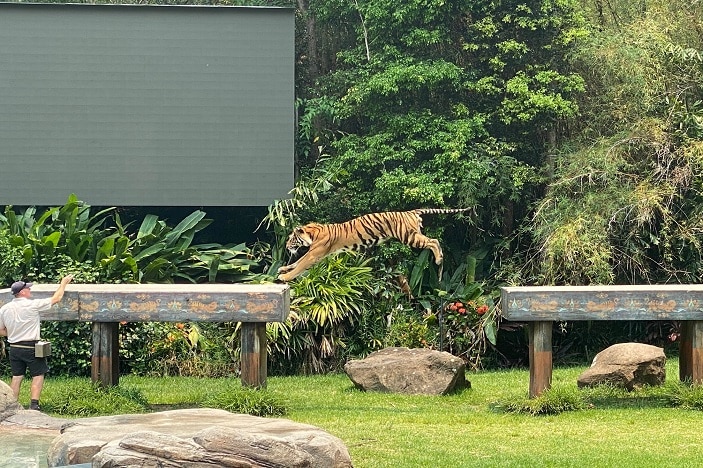 Dreamworld has an excellent display area of tigers that gets you (safely) up close to this amazing animal. The tigers at Dreamworld are ambassadors for their wild cousins who are sadly under serious threat for survival. There are a number of tiger experiences you can pay extra for, and the proceeds go towards the Dreamworld Wildlife Foundation, which is the largest zoological contributor to tiger conservation in the world.

Dreamworld Wildlife Foundation also drives anti-poaching and community engagement initiatives to try and ensure the future of the tiger in the wild. Every day, Dreamworld runs a free tiger show at Tiger Island (currently at 12 pm daily).  Here the tigers replicate all sorts of wild behaviours that have the crowd in awe, including jumping, tree climbing and swimming.

What is there to eat at Dreamworld?

Unfortunately, Dreamworld does not allow you to take in your own food and drinks, so you need to factor this into your day’s budget. However, there are a number of food and beverage outlets across the park, including Dough Bros. Pizzeria, Presto’s Training Cafe and a number of places that sell fast food like burgers, chips, hotdogs etc. There are also healthier options available including sandwiches and sushi. For treat time there is the ice cream parlour, candy store and churros stand. 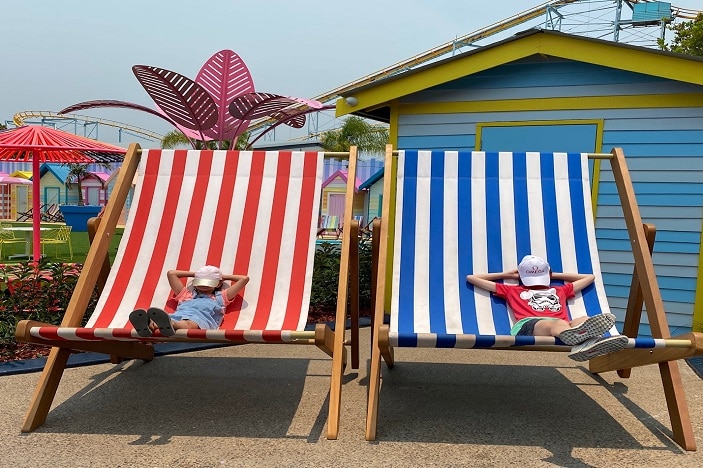 Things to know about Dreamworld before you go

For more information, or to book your tickets, visit the Dreamworld website. Dreamworld also hosts special events throughout the year, including a family-friendly Halloween night.