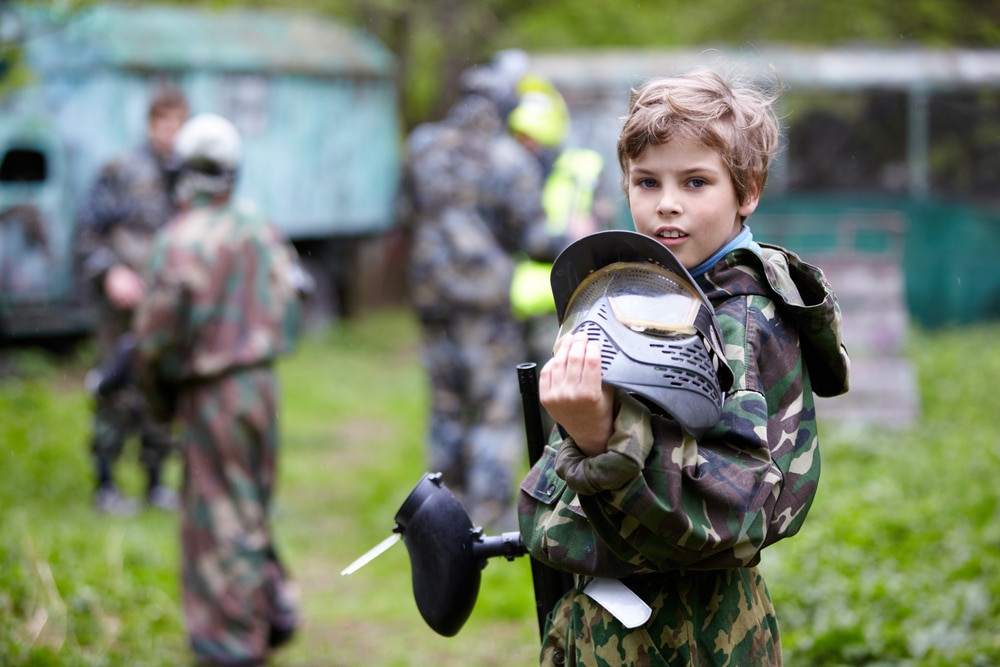 Here’s an awesome one for the older Brisbane Kids! We talk a lot about fantastic activities for the littlies, but what about fun experiences for Brisbane teenagers like Paintball?

If you love The Big Bang Theory, you’d know that one of the boys’ favourite pastimes is—believe it or not—an outdoor physical activity! Paintball, sometimes referred to as ‘skirmish’, is a fairly young sport. Having only been around since the early 80s, it has quickly garnered massive international popularity. But don’t for a moment think that paintball is a game just for the lads: both guys and girls regularly compete equally in teams and against each other on the same playing field.

We’re fortunate that here in Queensland the age you’re legally allowed to start playing paintball is 15 years, which is lower than some other Australian states. Some places will only take kids 16 and over so this is a question worth asking.

It’s highly regulated, and safety is a priority: there are strict rules that all players must follow, which are in place to ensure everyone has a great time in an environment that is as safe as possible. Every player is required to wear full protective gear, which is usually provided by the venue, and experienced and qualified referees supervise all gameplay. Whilst paintball does revolve around tagging your opposition with paint, players are not allowed to physically come into contact with each other in any other way.

What is a paintball marker?

The weapons used are generally referred to as ‘paintball markers’—they are in fact a type of air gun that fires spherical gelatin capsules roughly the size of bath beads, which are filled with a non-toxic water-soluble dye that burst on impact.

The basic premise of paintball is that you must complete a given task, or attain a goal, without being blasted with paint—pretty straightforward! But to make things interesting, there are a variety of different games that are organised; this is ultimately what defines the nature of the experience, which can range from light-hearted fun to more challenging for the players. For example one of the most popular scenarios called ‘Capture the Flag’ requires each team to steal a flag from the opposing team’s base, which as you’d expect could be a particularly difficult feat depending on the abilities of your enemies! It’s completely up to each venue as to which games they provide, so if you’re after one type of scenario, in particular, it’s worth doing your research in advance.

We’ve got fantastic choices here in Brisbane for venues to play paintball, with our beautiful region providing an incredible backdrop for some seriously fun gaming.

http://www.brisbanepaintballing.com.au/ Forget about boring old hay bales and run-down game zones! Attention to detail in the design of their pro zones, combined with carefully chosen outback landscapes makes Delta Force an excellent destination for a memorable day of paintballing. With modern, state-of-the-art equipment and marshals overseeing gameplay, you’re sure to have a fun and safe day out in Petrie.

http://www.skirmishsamford.com.au/ Situated only 25 minutes from the Brisbane CBD, this venue in Samford has hosted a myriad of international games and tournaments—which means you get to play on the same field as the pros! Real-world armoured military vehicles, special effects, mind-blowing fort complexes and intricate trench and tunnel networks are just some of the amazing features here.

http://www.mangohillskirmish.com Located about 25 minutes north of the Brisbane CBD, and only 3 kilometres from the North Lakes Shopping Centre, Mango Hill Skirmish is Brisbane’s only combined paintball and outdoor laser skirmish facility. The venue is unique in that it can operate paintball and laser skirmish games simultaneously on separate dedicated fields. They only operate Monday – Friday.

https://www.valhallapaintball.com.au/ Established in 2014 on a massive bush property and regarded by some as Queensland’s ultimate battlefield. Located 1 hour south west of Brisbane CBD, but well worth the drive, with games that focus more on the tactical side of paintball. Tac Ops also regularly host scenario days, as well as a tournament series for both Rookie and Pro players.

Paintball is a great excuse to get a group together for an awesome day out in the sun—and if your Brisbane Kids like to battle it out with their friends in video games, just imagine the fun they’d have doing it in real life!

We showcase a range of outdoor activities in Brisbane because we think childhood is best celebrated outside in the fresh air!