This awesome playground is suited to Brisbane Kids of all ages, is an easy walk to several public transport options and is protected day-round by beautiful mature shade trees.

Kids big and small are catered to in this fun playground. Slide down a frog’s tongue, climb on the insects, spin on the merry go rounds, play shopkeeper or climb the forts – there is lots to do in this popular West End park.

This playground is approximately 600m from the CityCat and CityGlider terminals but still an easy, flat walk along a wide concrete path if you wanted to make the outing an adventure! This park is perfectly positioned for river watching as regular ferries and other river craft sail past. There is also another small set of swings and animal rockers on the far side of the Sailing Club, on Riverside Drive. Orleigh Park features on our list of Brisbane Parks that are Wifi hotspots.

Ride your bike or scooter along the purpose-built track around the playground complete with bridges, speed bumps and corrugations and concrete and soft fall rubber sections to engage the inner rally driver. Swing for hours on the swings or spin around on one of several merry go rounds and dizzy sticks. The playground is even surrounded by a low garden which looks perfect for fairies to live in.

There is a harness swing at this playground (see picture). Disabled toilets are adjacent to the playground accessed by concrete pathway. Wheelchairs could be accommodated at the picnic tables, some of which can be accessed by pathways. There is partial fencing along the top of a retaining wall in the middle of the playground, and along the riverbank behind the swings to deter enthusiastic children falling over the edge.

Another great nearby Brisbane Playground is Orleigh Street Playground in Orleigh Park or if you fancy a coffee and some food you could head to Jugar Eat, Drink, Play, a child-friendly cafe/restaurant featuring a play area. 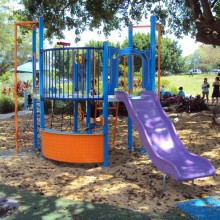 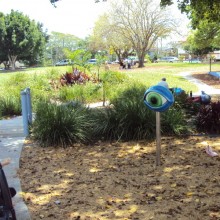 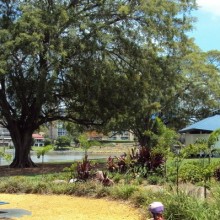 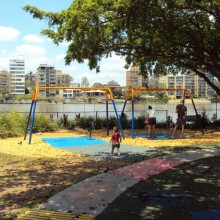 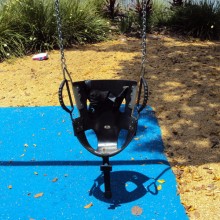 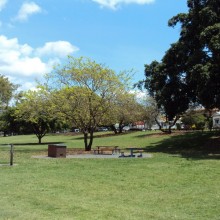 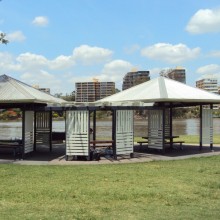