Home > Local Information > Is it okay to leave kids alone in cars?

Is it okay to leave kids alone in cars?

We’ve all been there — you need to pay at the petrol station but you have a carful of kids, you want to quickly duck into a shop for a last-minute grocery item and wish you didn’t have to drag the children with you, your little one has fallen asleep in their car seat and you really don’t want to disturb them, or you have older, responsible kids who would rather stay put than come with you.

So what do you do? Do you leave the kids unattended in the car? Is it ever okay to do so? We want to stress that there are grey areas. That safety should always be the number one priority. Even if the law permits something DOES NOT mean that it’s right for you or your circumstances.

The laws relating to leaving children unattended in cars

Since there are so many factors and variables that can affect whether it is safe to leave children alone in a car, there is no law in Queensland that states a specific time or age limit for doing this. However, leaving children unattended in cars is covered by several areas of legislation. (For all Queensland legislation, you can view the full Criminal Code Act here. For other states, territories and countries, please be sure to check your local laws as these can and do vary.)

The main law in Queensland relating to leaving children unattended is as follows:

Leaving a child under 12 unattended (1) A person who, having the lawful care or charge of a child under 12 years, leaves the child for an unreasonable time without making reasonable provision for the supervision and care of the child during that time commits a misdemeanour. Maximum penalty—3 years imprisonment. (2) Whether the time is unreasonable depends on all the relevant circumstances. [Section 364A, Criminal Code Act 1899]

While some scenarios would clearly be against this law, there could also be some grey areas in which parents may wish to consider many factors, such as:

However, with so many variables to consider, the safest option will always be to never leave children unsupervised in a car.

Moreover, there are some situations in which it is clearly and unequivocally a SERIOUS CRIME to leave children alone in cars, and that is when the child’s health and safety could be at risk.

The legislation relating to the protection of children includes:

Duty of person who has care of child (1) It is the duty of every person who has care of a child under 16 years to— (a) provide the necessaries of life for the child; and (b) take the precautions that are reasonable in all the circumstances to avoid danger to the child’s life, health or safety; and (c) take the action that is reasonable in all the circumstances to remove the child from any such danger; and he or she is held to have caused any consequences that result to the life and health of the child because of any omission to perform that duty, whether the child is helpless or not. [Section 286, Criminal Code Act 1899]

Endangering life of children by exposure Any person who unlawfully abandons or exposes a child under the age of 7 years, whereby the life of such child is or is likely to be endangered, or the child’s health is or is likely to be permanently injured, commits a crime. Maximum penalty—7 years imprisonment. [Section 326, Criminal Code Act 1899] 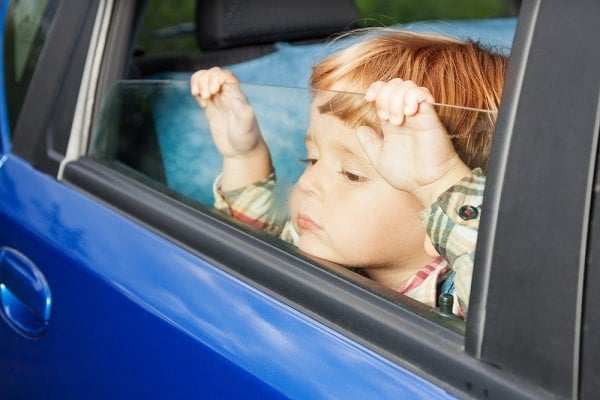 One situation in which a child’s health and safety would be at risk is clearly leaving them in a hot car.

The Temperature in Cars Survey carried out by the RACQ made several important findings that show the dangers of leaving children unattended in cars, even for a short time.

They conducted a variety of tests on temperatures inside parked cars and concluded that ‘there is no safe situation in which to leave children unattended in a vehicle’. (The complete details of the RACQ Temperature in Cars Survey can be found here.) Here is a summary of their main findings:

If a child is accidentally locked in a car, you must act quickly.

What about our furry kids?

Don’t forget that animals die in hot cars too. Leaving an animal without appropriate water and shelter is an offence under the Animal Care and Protection Act 2001 and can be prosecuted. Visit the RSPCA Queensland website for a full explanation of the Dos and Don’t regarding leaving animals in cars.

If you see an animal left in distress in an unattended car, the RSPCA recommends seeking emergency help without delay. In a car park, they suggest notifying centre management immediately and phoning one of the following:

For more information on leaving children unattended, check out our article When is it okay to leave kids home alone?

One response to “Is it okay to leave kids alone in cars?”