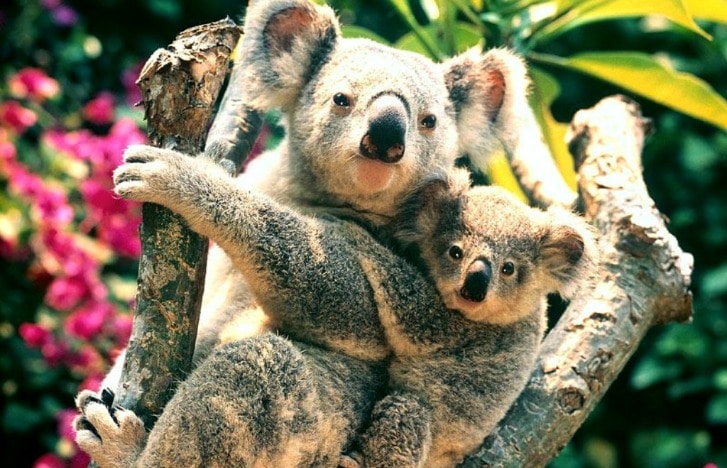 Koalas are one of our best known Australian native animals, with many tourists coming to Australia to catch a glimpse of a koala. I first fell in love with koalas watching Blinky Bill on television as a child and kids these days have The Koala Brothers on ABC. Although they don’t represent real koalas, they did make me fall in love with them and I’m sure many kids these days are doing the same thing.

If your Brisbane kid has an affinity for koalas too, here’s a list of fun facts for them to learn more about their favourite animal. There’s also a list of places to see koalas. You can even get up close and personal with them at some of these locations too.

Lone Pine Koala Sanctuary – We’re lucky to have the world’s first ever koala sanctuary right in our backyard in Brisbane. Lone Pine was established as a koala sanctuary in 1927, starting with only two koalas – Jack & Jill. They now have over 130 koalas in residence and have grown into a full wildlife sanctuary to include over 100 different species of native Australia animals. You can even have a koala encounter (bookings required).

Daisy Hill Koala Centre – Built by the government as a koala education facility, the Daisy Hill koala centre was opened to the public in 1995. The centre offers a number of educational programs. Entry is free and koala’s can be seen from two different viewing board walks.  Visitors are unable to pat or handle the koalas.

Aside from being called joeys, baby koalas have a number of other unique features. A newborn koala is only 2cm long when it is born, is hairless and looks much like a jellybean in shape. The joey stays safe in its mother’s pouch for about 6 or 7 months, drinking only its mothers milk. To prepare for a lifetime of eating Eucalypt trees, the joey will feed on what is known as the “pap” of its mother which actually her diluted droppings. You can liken it to human babies being fed mushy food before they move onto solids. The pap (and the helpful bacteria within it) is needed for joeys to digest eucalyptus leaves.

Interesting fact about baby koalas: A sad but true reality is that many koala joeys fall victim to misadventure, often on busy suburban roads. If koala rescuers find a mum and joey koala diseased, they will often seek to recover the pap which can be used to help orphaned koala joeys.

It is true that koalas are found in the wild throughout Australia. As they are mainly nocturnal animals, if you do spot them during the day it will usually be high in a eucalypt tree fast asleep. They aren’t particularly active animals but will move more during breeding and dispersal season.

Facts about a koala’s appearance

Do koalas live in Australian backyards?

Koalas can be found in backyards across Australia but less so in urban environments. Koalas are solitary creatures and males, in particular, live alone in ‘territories’. Because they don’t live in groups, it means that koalas can quite difficult to find in the wild even if you know they are there. Even experienced koala spotters have been known to miss koalas

What sounds do koalas make?

Koalas make a range of noises depending on what is happening around them but they are mainly silent creatures. Noises include high-pitched shrieks from joeys or upset koalas or guttural bellowing noises from male koalas keen to find a special lady koala (and keep other males away)

Do koalas have tails?

The koala does not have a visible external tail but their skeleton shows maybe they did in some part of their evolutionary history.

Koalas can swim but they can also easily drown in swimming pools when they aren’t able to get out.

Can koalas kill you?

No, koalas cannot kill you. The dropbear as it is sometimes referred to is an Australian urban myth. You can find photos on the internet of koalas seemingly with huge fangs and scary faces. These images are photoshopped and are not real. Koalas will not attack you at all but may scratch and bite if you decide to pick one up (which you shouldn’t), but they cannot kill you.

Do koalas have whiskers?

Wouldn’t that be fun if they did! But no, koalas do not have whiskers.

14 responses to “Koala Facts for Kids”