Thank goodness the land on which the former Milton Tennis Centre used to rest has ended up as a public space.

And what a wonderful space it is! Tennis courts, a massive green area, bbq facilities, a cafe and one of the coolest playgrounds in Brisbane. Make no mistake, this is a destination park … one that’s well worth travelling to even if you live on the other side of town.

“The Arena” playground at Frew Park is nothing short of amazing. The area’s tennis heritage features throughout, but the main theme is one of an industrial building site. The massive cement play structure has huge slides, ledges for climbing, a curling slide that’s five metres high and an enclosed mesh cage that dangles eight metres off the ground!

The playground works really well for little ones too. There’s swings, a smaller slide, large sunken rubber tennis balls to jump on, big beads to move, beams to balance on and all sorts of play gear to touch, spin and turn.

The precinct has a large green space for kite flying, football, cricket and picnics. Flat paths wind their way through the site, making it perfect for trikes and scooters.

Kids can put their climbing skills to the test on the climbing wall, use the basketball hoops, explore the tunnels and hide in the “control room”. There’s also original artwork around every corner with a mix of industrial “street” images, city scapes and native birds.

Frew park is easily accessible with flat paths leading from the car park. Disability parking bays are available. The toilet block is on ground level and ample shaded areas are available.

There’s a cafe, serving tea/coffee, basic snacks and treats, located above the amenities block that looks out over the playground. Frew Park has spaces for 50 cars, but is also close to public transport links. It opened in late 2014 and the council says sites for bookings should be available from March 2015. It would be an awesome spot for a birthday party. For bookings phone council on: 07 3403 8888.

Another nearby playground is Milton Park.

Frew Park is located between Milton Road and Frew Street at Milton. Carpark access is via Frew Street. 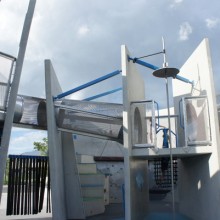 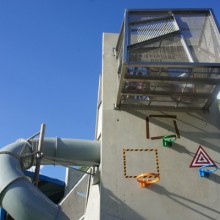 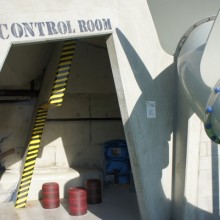 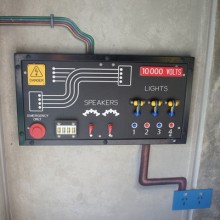 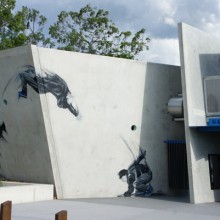 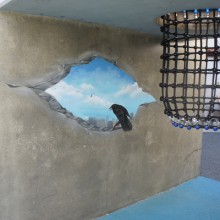 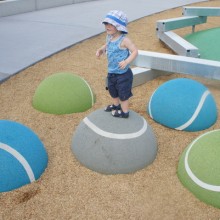 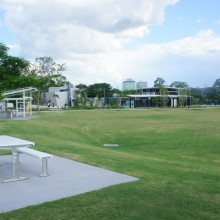 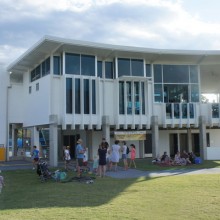 One response to “Frew Park Milton”