Dinosaurs are popular amongst kids and adults alike, with the mystery of the prehistoric era being the cause of much childhood excitement. As such, dinosaur games can be a great opportunity for both learning and fun. There are plenty of dinosaur themed games you can create at home with little to no materials, which are perfect for kids birthday parties, get togethers or some simply for solo play for your little dinosaur fanatic.

For this game you will need some plastic dinosaur toys and related objects. A couple of days earlier, take a large plastic container such as an ice cream tub and add the dinosaur toys before freezing. At play time, give the kids some age appropriate tools to free the dinosaurs from their frozen fossil, such as paddle pop sticks, kitchen utensils or other non-dangerous digging tools. Remove the large block of ice from the tub and let them get to work. For parties, you may instead want to freeze enough dinosaur toys in small separate containers so that each child has their own fossilised dinosaur to free. They make very cool party favours. 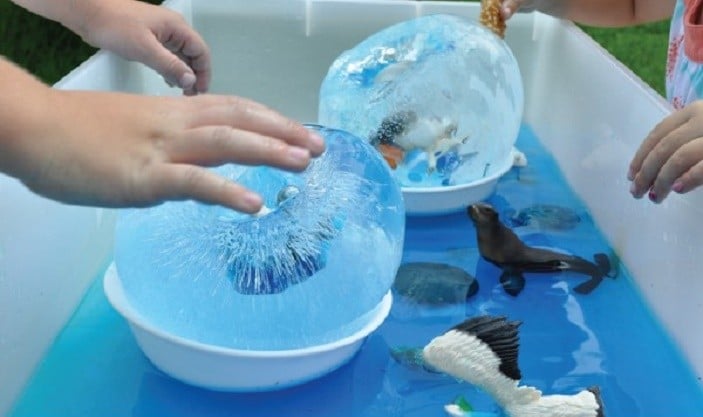 Just substitute the animals for dinosaurs

A simple game that requires no actual materials, dinosaur tail is a variation on tag, with one child starting the game as ‘it’. They are to chase and tag the other players and each time a new player is tagged, they must hold hands and continue tagging others, creating a ‘dinosaur tail’ as they join the tag chain. The object is to keep going until they tag the last person, who can then become ‘it’ for the next game. You can find out how to make these via the awesome talent at Running With Scissors 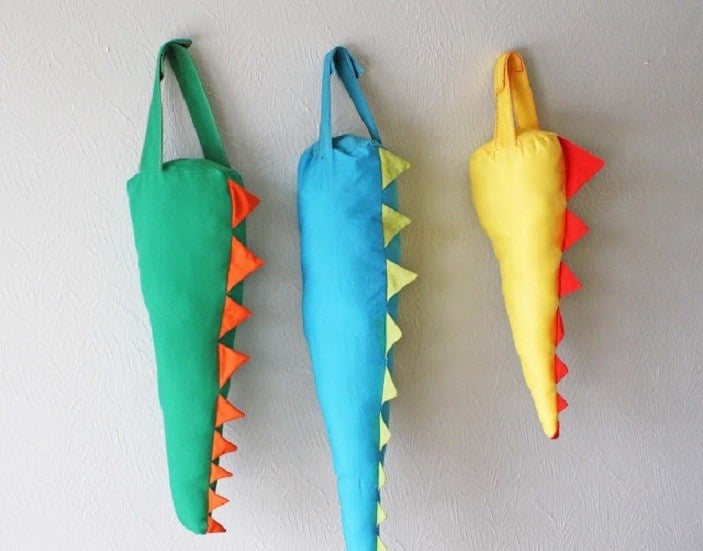 Imagine thanks to Running with Scissors

This one is a little similar to the Frozen Fossil game, only this time using a sandpit with hidden dinosaurs to dig up. Again plastic dinosaur toys are a great option, and you may want to use plastic eggs such as those available around Easter time as ‘dino eggs’. Give the kids some sandpit digging tools and away they go.

Much like the classic game of hot potato, have kids sit in a circle and give one a large filled water balloon, egg (a football is a great makeshift egg) or just a standard ball. Start the music and have the kids pass the ‘egg’ around the circle. Once the music stops, the person left holding the egg is extinct – out of the game. Continue until there is only one child left.

Using plastic Easter eggs filled with small dinosaur trinkets, candies and toys, hide the eggs around the yard or house and let the kids hunt for them. If there is a big age gap between the kids playing, you may want to designate a specific colour to each seeker so they all end up with a fair share of eggs and are encouraged to use team work.

For this game you will need a red towel or blanket, a rope and enough kids to form two teams. Lay the towel or blanket on the ground and have the two teams each stand on one side. This is the lava. The two teams then have a tug of war, with each team standing in a line on their side of the lava holding the rope and pulling until one team lands in the hot lava.

PIN THE TAIL ON THE DINOSAUR

For this game you will need a large dinosaur poster or drawing hung on the wall. Give each child a dinosaur tail cut out with blu-tack or sticky tape on the end. The kids take in turns being blindfolded and attempting to pin the dinosaur tail closest to the actual tail on the poster. To make it more challenging, you may want to spin the kids around a couple of times before their turn. We found this awesome example at Frugal Fun 4 Boys 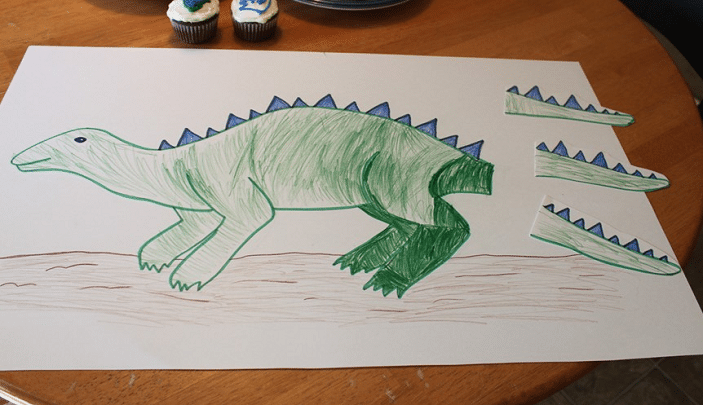 Image thanks to Frugal Fun 4 Boys

Like the classic game of ‘Duck, duck, goose’ this one requires nothing other than a group of kids and some space. Have the kids sit in a circle facing each other, with one of the kids ‘it’. They go around the circle touching the other children’s heads saying ‘Brontosaurus’ each time until they reach the person who they want to chase them, and they say ‘T-rex’. The person tagged T-rex gets up and chases the kid who tagged them, attempting to tag them before they sit down in the vacant spot. If the T-rex tags the other child before they sit down, they are up again, but if the T-rex is too slow, it is their turn to go around the circle and tag someone new.

Local Hint> If you live in Brisbane with Kids then don’t forget about the Dinosaur Museum which is completely free PLUS you can print off our free Dinosaur Scavenger Hunt to take with you!