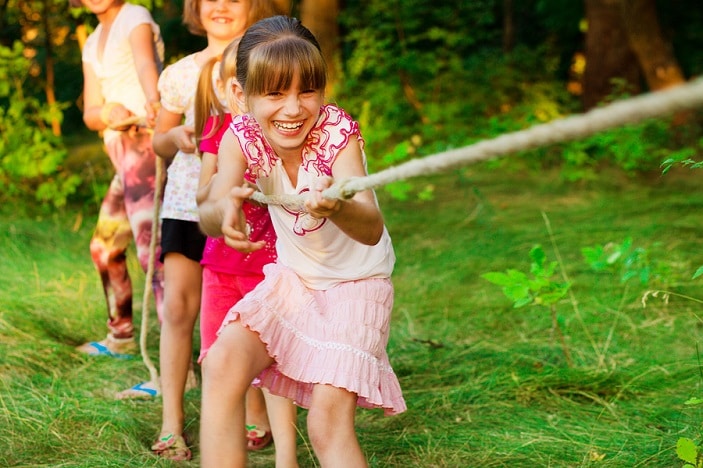 Hosting a kids party is so much fun! Even more, fun when you include a handful of fun kids party games to liven the celebration!

1.  Pin the Tail on the Donkey – or whatever other themed creature is unlucky enough on the day.  Print out a picture of the said character minus a main feature (donkey / tail, pirate / sword, princess / crown etc).  The kids then take turns, whilst blindfolded, seeing who can pin the feature onto the hung image as close to where it needs to be.  The winner is the one who get it closest.

2. Wack a Pinata – Buy or make a piñata (there are plenty of instructions online) and fill it with treats and gifts.  Kids can then take turns hitting it with a stick until finally there is a big enough hole and all the loot tumbles out.

3.  Get Crafty – Sometimes it’s a fun activity instead of a game or combining the two that get the kids having the most fun.  Get them to make paper airplanes and then have a competition to see who can fly theirs the furthest.  Or if it’s a lego party, get the kids to make a lego car out of blocks and then they can have car races.

4.  Pass the Parcel – You can either wrap one main gift in multiple layers (as many kids as are coming to the party) or buy smaller gifts to be wrapped within each layer.  Get the kids to sit in a circle and play some music as they pass the parcel around the circle.  When the music stops the child who is holding it gets to unwrap one layer and possibly discover a prize.  This continues until the final layer is unwrapped and the main prize won.

5.  Limbo – A cheap, fun idea.  Use a broom stick and get two adults to hold it on either side.  Kids get in a line and take turns walking underneath it (only able to bend backwards – not to the front or side) without touching the stick.  It starts quite high and with each round gets lower and lower.

6.  Balloon Bust  – Possibly the simplest game on earth but it guarantees laughs. Place a small prize in each balloon before inflating.  Blow up balloons an hour or so before the party and place in a laundry basket. Let kids pick a balloon and on your count, let kids sit on the balloons to pop it. They can use the floor, chairs, or even the couch, but no hands, just their bottoms!

7.  Musical Chairs – Set up chairs in two rows back to back or in a circle facing outward. Have every child stand in front of a chair.  Start your child’s favourite music.  Children walk around the chairs.  Remove a chair.  Stop the music and have everyone take a seat.  The child without a seat has to sit out and a chair is removed.  The game continues like this until the final round with two kids going around one chair.  The winner is the one that gets the final seat when the music stops.

8.  Treasure Hunt – This can be played indoors or outdoors.  It’s a very simple game.  Just hide lollies or toys around the house or yard and then tell the children to head out and find them.  The game is over when the last lolly or toy is found.  Alternatively, you can give them a list of items to find.  The one who ticks all the items off first is the winner.

9.  Hot Potato – Instruct the players to sit in a circle. Using a stuffed sock or a beanbag, everyone should pretend that it is a hot potato.  As the music starts the kids start to pass the hot potato around between them.  When the music stops, the person holding the hot potato is out.  This goes on until only one person is left.

10. Tug of War – Divide the players into 2 teams.  Tie a ribbon or hanky in the middle of the rope and put two lines on the ground with each team lined up behind their line.  Get the kids to pick up the rope and on the word GO the team that manages to pull the rope further their way, therefore forcing the other team over their line is the winner!

11. Three Legged Race – A three legged race is played by children forming pairs. They stand side by side and their two inside legs are bound together gently.  They use each other for balance and race against the other teams along the race path and across the finish line. The winner is the team to cross the line first.

12. Stuck in the Mud – This is a unique version of tag. One person (or two if playing with a large group of kids) is “it”. The children run around and the person who is it has to try and tag them.  If you are tagged by “it” then you have standstill where you were tagged with your arms out wide and your feet apart – they are “Stuck in the Mud”.  The “it” player continues to try and tag more people while the other players can try to release you by crawling under your legs as they are trying to escape the “it” player.  The game is over when the “it” player manages to get all other players stuck in the mud.

14. The Chocolate Game – This is a great game for older kids. You will need a block of chocolate (plain is best), some dress up clothes, knife and fork, and a dice.  Get the kids to sit in a circle and take turns rolling the dice. When a player rolls a 6 they jump up and dress up as quickly as possible in all the clothes provided (hat, scarf, beanie, gloves, jumper, socks).  They then use the knife and fork to cut the block of chocolate into individual squares. As they cut a piece they pick it up and eat it and continue to do so until the next player rolls a six.  At that point the person cutting the chocolate stops, takes the dress ups off and hands them to the waiting player who then takes a turn at cutting and eating the chocolate, their turn lasts until someone else rolls a six. The game is over when the chocolate block is all gone and the person who eats the last piece of chocolate wins.

16. Donut on a String – Tie the string on the donuts (one for each guest) and hang them from a clothes line, curtain rod or anything that is available.  Each player stands beneath a single donut.  On the mark of ‘go’ the players begin to eat their donuts using only their mouth.  The first player to finish their doughnut wins.

18. Balloon and String Game – Tie a balloon to your ankle by a piece of string (about 50cm long).  Once everyone has one then start playing some music.  While the music plays, people walk around the floor.  When the music stops, the aim is to burst the others peoples balloon and protect your own.  No holds barred, whatever it takes to burst that balloon is allowed.  The winner is the last person left with a balloon.

19. ‘Fishing’ for Loot Bags – Wrap small presents (multicoloured pencils, mini cars etc) and sticky tape a metal washer to each one.  Make a ‘fishing line’ with a rod and a short piece of string and attach a small magnet to the end of it. The children stand on a small stool/chair and fish to catch a present.

20. Egg and spoon race – Boil some eggs and get the kids to try to balance them on a spoon and see who can get to the finish line the fastest without dropping their egg!

There are so many fun ways to keep kids entertained at a party and it really doesn’t have to cost anything except maybe a small prop or item.  You can try to theme the games depending on the party (car races for a Car or Lego party, Fish for Loot Bags at an underwater or mermaid party, What Animal am I at a zoo party etc) or just have a few of them ready to go if you sense the kids are getting restless.  Games are always a great hit at any kid’s party and a sure way to ensure lots of fun is had and the hours pass quickly!