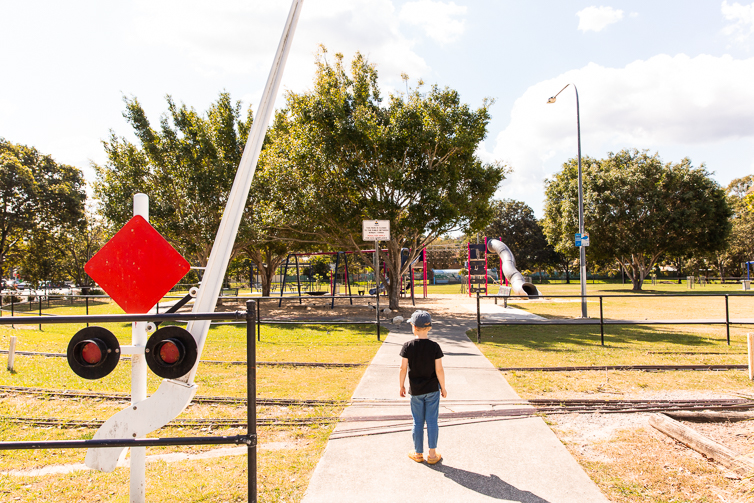 Ewing Park has something for everyone who visits. Twice a month there are train rides on a miniature train.  There’s also a fun playground, rugby goalposts, barbecues, picnic tables and toilet facilities.

Brisbane Kids with an interest in transport will get a kick out of the train tracks, platform and boom gates here.  Every 2nd and 4th Sunday of the month there are actual train rides! Weather and restrictions permitting, on every 2nd and 4th Sunday of the month from late January to November you and your children can enjoy train rides from 10:30am-4pm. Children under 4 years must be accompanied by an adult, and adults ride free with children under 4. Enclosed shoes must be worn – no thongs, sandals or croc shoes. Check our calendar for further information, or the Facebook page for the Logan Model Engineering Society here for up to date information.

Ewing Park has received a brand new playground that has a lot of great elements, especially for primary school aged children.  There’s a large, very dark, tunnel slide as well as a fun bendy slide.  These slides are on separate platforms joined together by a high rope bridge.  The slide platforms can be accessed my a range of cargo nets, ladders and climbing walls.  Please note that younger kids and toddlers might find this playground equipment is too challenging to access without assistance.  However just across from this playground structure is a bank of 3 swings – including a toddler swing and a nest swing as well as a traditional swing seat – which are always popular with children of all ages.

The open playground is sand-based. It features a few shade trees, but sunscreen and hats are a definite must and this equipment features metal and plastic surfaces which may heat up in the Queensland sun.  It has a great bike path running the perimeter of the park, along with several netball, basketball, volleyball and tennis courts adjacent to the playground. There are several sheltered picnic tables at Ewing Park as well as multiple electric barbecues. Bench seats are located around the park and on the train ‘platform’. The train rides and railway infrastructure here are great fun for younger Brisbane Kids to imagine themselves as a train driver or a passenger, they will just have to use a little imagination to conjure up an invisible train to chug around the train tracks which encircle the playground and park.  Older kids will be able to imagine the playground as a fortress with escape slides, and for sporty kids the rugby posts will have them imagining themselves scoring tries or kicking field goals for the Broncos or the Wallabies. Disabled toilet facilities are provided at Ewing Park. There are lots of flat concrete paths throughout the park that would be suitable for wheelchairs, as well as shelters set on concrete. The playground is unfenced, however the sandy base makes it slightly inaccessible.

Another nearby Brisbane Playground is Doug Larsen Park.

Ewing Park is located on Netball Drive, off Ewing Road, at Woodridge. 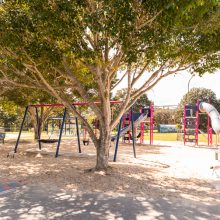 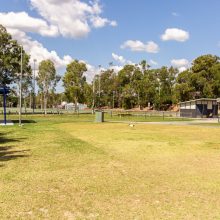 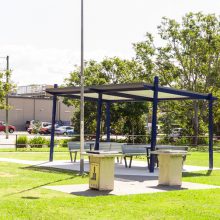 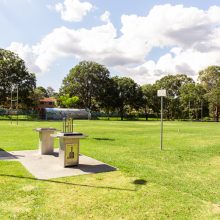 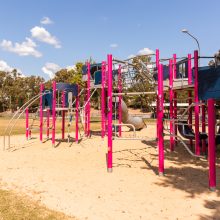 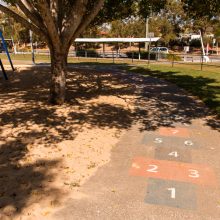 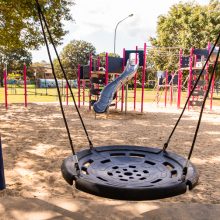 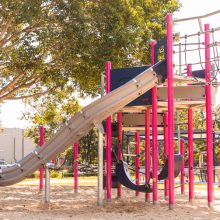 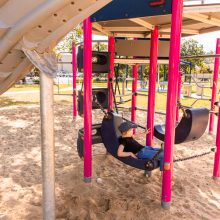 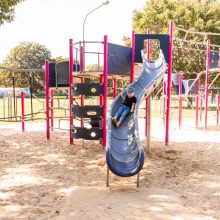 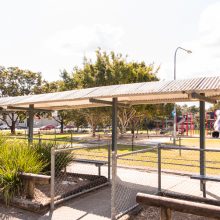 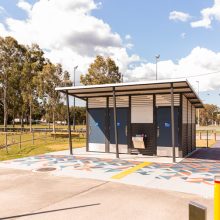 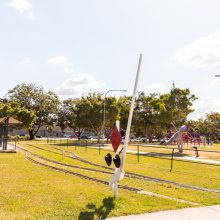 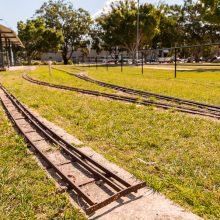 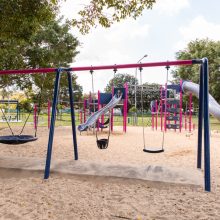 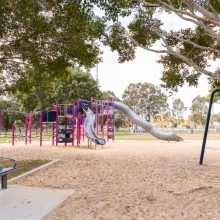 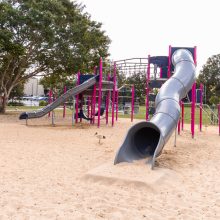