Home > Editors' Picks > What are Play School Live Shows like for Toddlers?

What are Play School Live Shows like for Toddlers? 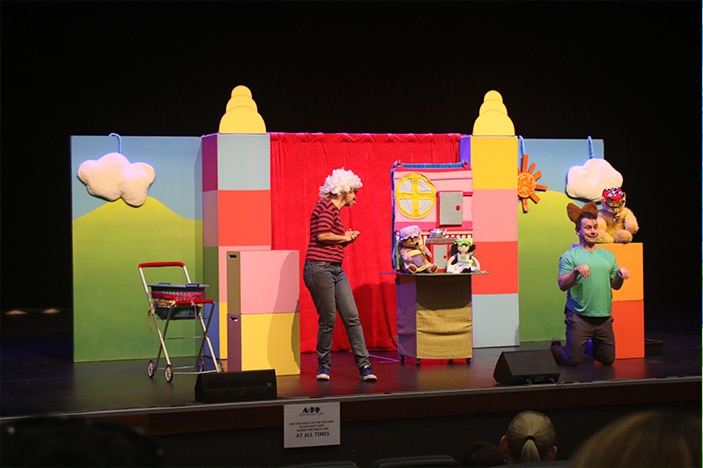 There’s a bear in there, and a chair as well.  There are people with games, and stories to tell.  Open wide.  Come inside.  It’s Play School.

I think you would be hard pressed to find a child or adult that cannot sing the entire opening jingle to Play School.  For over 50 years now this much loved children’s program has been a staple on our national television sets and has featured regularly in the lives of our children as each day well known actors take turns hosting this beloved show.  Designed specifically for preschoolers, it is a simple yet clever mix of colour, stories, music, craft, fun and laughter.  Overflowing with smiles and full of imaginative play, it is little wonder Play School is Austalia’s longest running children’s program – and the second longest in the world too. 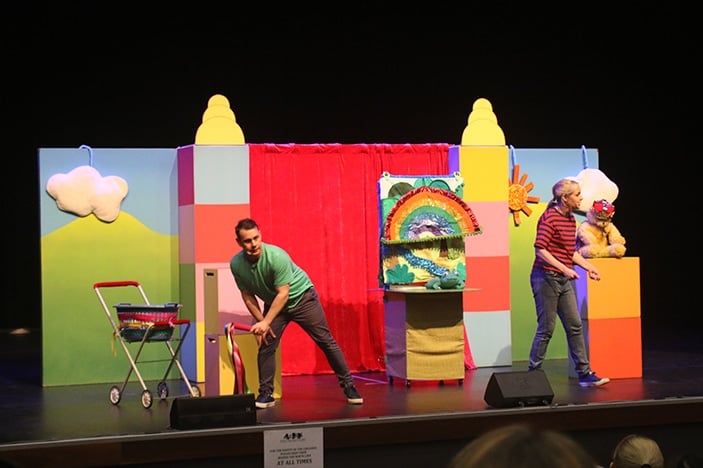 With such a huge television following it is not surprising that the live concerts they have created are so popular.  Their latest show, Play School Live in Concert: Prince of Bears 2017 kicked off in Brisbane this weekend and, with a heart laden with nostalgic love for a childhood favourite, I happily went along with both my young son (aged 2.5 years) and my niece (almost 2 years).  This was the first time I had attended one of the live shows and I was interested to see how it transferred to the stage as well as how much the little ones would enjoy it.

I wasn’t disappointed.  From the moment I walked into the auditorium I was greeted with a relaxed space, a room of excitable chatter and a stage adorned with a simple and bright set that could easily be related to that viewed on the television screen.  The two hosts for this show, Teo Gebert and Abi Tucker, seemed even brighter and more cheerful in real life and, along with the talented Bill on keyboard, the three did a fantastic job of interacting with the audience and building excitement for the kids.

Of course, the real stars of the show are the much loved toys themselves and Prince of Bears is based around long time favourite, “Prince” Big Ted, who has a crown and a royal cloak but doesn’t have a royal castle.  The show follows him as he travels through a fun filled world of nursery rhymes, songs and stories on his journey to finding one.  Along the way he is joined by other Playschool favourites like Humpty, Jemima, Little Ted and Meeka and with each new face came a new level of exhilaration from the crowd.

Favourite nursery rhymes like Twinkle Twinkle, Wiggly Woo and Hickery Dickery Dock were peppered throughout the entire performance which meant the littlest audience members barely sat down at all.

What are the shows like for toddlers and who else would enjoy it?

My two older daughters had also wanted to come along to the show when I said that I was going but, knowing it was marketed for children of pre-school age, I thought that at 5 and 7 years old it may be a little too young for them.  In hindsight though, I think they would have loved it.  Even though, much like the television show itself, everything in the concert is carefully paced for the smallest of children, going to see a show like Play School is in part because it is fun for little ones but it also in part because it is such a loving reminder of our childhood.  Anyone who has grown up watching this show will appreciate the familiarity of its format, of its characters, of its songs and of its warmth.  I admit I actually felt a little disappointed when we didn’t get to choose, and look through, one of the infamous four shaped windows (diamond, pick diamond!).

Toddlers will love the simplicity of the show and its familiar songs and toys.  The fact that is ran smoothly in one continuous motion for the entire 50 minutes with quick and fun character and scene changes meant that the younger kids could not easily get distracted. It was completely interactive with a lot of audience participation, singing and dancing but there were also some quiet times to just watch and listen.

And, although the small kids sang loud and danced with much enthusiasm throughout it, the older children and adults in the room seemed just as happy to be there.  The hosts threw out a few witty lines that only the parents in the rooms would appreciate (Teo saying “come on, I have helped you guys out daily for years” when he asked for the parents to sing louder) and it is wonderful to share a generational love for the same show with your kids.

I think the concerts are light hearted, fun and entertaining and the perfect outing for any family who are long-time Play School fans.  If that is you and you haven’t booked a ticket yet then you can do so as well as check out all dates and venues here.