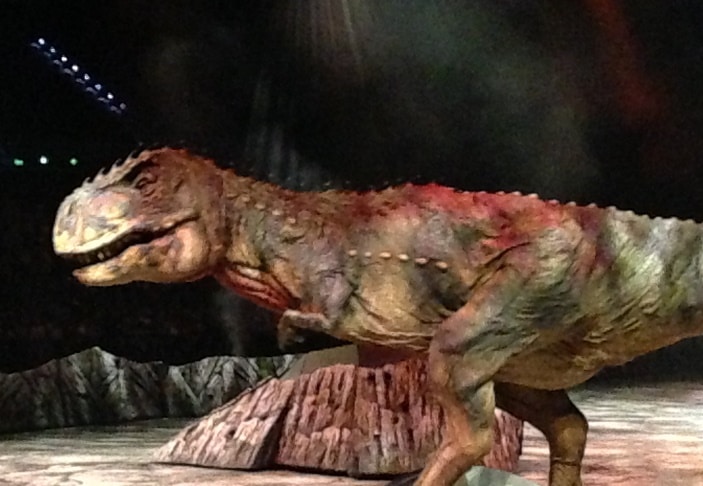 Walking with Dinosaurs has quite the reputation for being an impressive stage show for kids but even I was not prepared for the experience that would, (in my sons words) blow his mind!

Thanks to Visa Entertainment we were invited to head along to the Easter Sunday showing of Walking With Dinosaurs at the Brisbane Entertainment Centre. My kids were particularly excited because dinosaurs are a big part of their imaginary play. Many discussions were had in the car ride on the way about the technicalities of the word real and the possibility that perhaps the history books were wrong. Master 5 was confident there was a possibility dinosaurs still existed, while Master 8 was quite resolute and dare I say smug about his certainty that dinosaurs could not possibly be real. 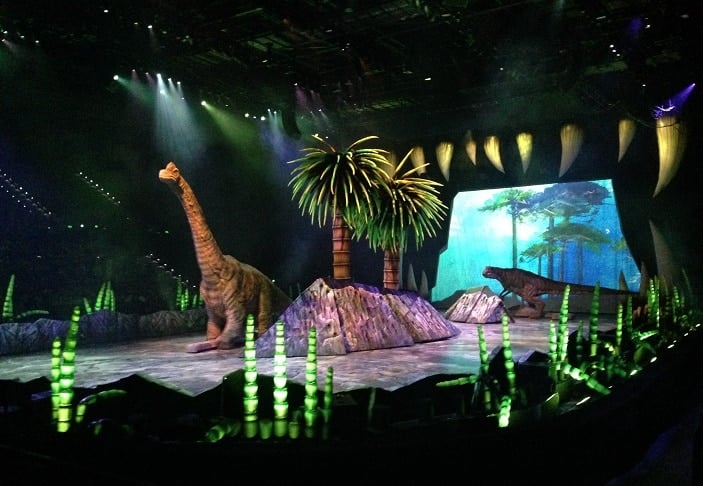 What you can expect when you see Walking With Dinosaurs

Walking with Dinosaurs takes you on a journey through time narrated by a very enthusiastic paleontologist. Without giving too much away you can expect all the usual dinosaur characters to make an appearance including the very impressive Tyrannosaurus Rex. Nothing can prepare you for the overwhelming presence of these prehistoric animals taking stage as they would have millions of years ago. Even as an adult there were moments where I took a breath in awe of these creatures and then later in respect for the skill that must be involved in recreating them. For those considering taking children with sensory issues to Walking With Dinosaurs, I think it has the perfect balance – the volume is not too loud, the dinosaurs are not ‘in your face’, but this show is utterly awe-inspiring for every audience member. Please note though that there is strobe lighting and occasional loud thunderclaps, which may upset some more sensitive children.

What the kids will think of Walking With Dinosaurs

My children were completely overwhelmed by the entire performance. Master 8 was giving thumbs up throughout, screaming in pure excitement and at the end of the show stood up and gave a standing ovation. He declared with all abandon that this was, the single best moment of his life. During the show he was clearly pleased to know a lot of the information presented to him and enjoyed the thrill of deconstructing how he thought this stage show was possible. It was an exhilarating, positive sensory experience for him.

Master 5 found the show a little bit different, in that I am not sure he was able to disconnect reality from the mechanics of what was actually happening. It meant at times his breath was sharply drawn in excited fear and his eyes wide with anticipation. It was a magic moment to watch him completely immersed in a story that was as educational as it was entertaining. In truth so many previous dinosaur experiences haven’t offered what Walking With Dinosaurs can. 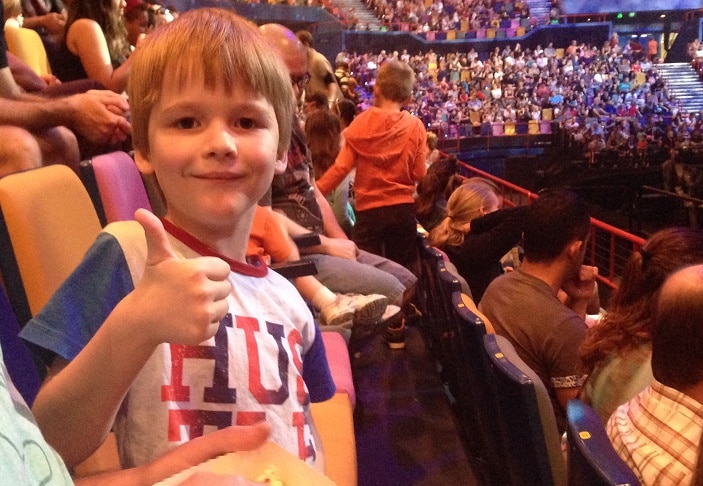 Age recommendation for Walking With Dinosaurs.

If your child has an interest in dinosaurs then they are probably at an age where this show will offer them some great value. I am not suggesting a young toddler would be solidly entertained throughout but a dinosaur interested preschooler would be utterly entertained. I did see the odd child gripping to their parent during some moments of the show but they it wasn’t over the top and arguably half the reason why this show is so amazing. The performance itself is in 2 x 40 minute segments with a 20 minute interval, so it is long enough to have great value without being so long that it starts to lose engagement from the kids. My children were literally on the edge of their seats for the entire show.

When you attend a show at the Boondall Entertainment Centre it is worth noting that the parking cost is usually in addition to your tickets- for us on this occasion, $15. To their credit there is ample parking, in nice surroundings and we went from car to stadium in about 3 minutes. My advice is to get there a little early so you can grab yourself a coffee and some refreshments. We found the food well priced – (standard for this sort of fare and location) and the hot chips were really fresh and tasty (which is not necessarily expected). The coffee was good too which is a win for tired parents. The service was outstanding both from ushers and catering.

You can buy a range of dinosaur Merchandise with prices starting from about $20 with t-shirts around the $35 mark which is pretty average for a live show. The great thing about stadium seating is that the quality of the show is not reduced greatly by buying less premium seating. This is not a show that requires you to see the face of that one performer, instead you are looking at an entire stage of activity and entertainment. We will definitely go to the next showing of Walking with Dinosaurs as I think it is fairly unparalleled in terms offering such an impressive show that is both entertaining and educational. 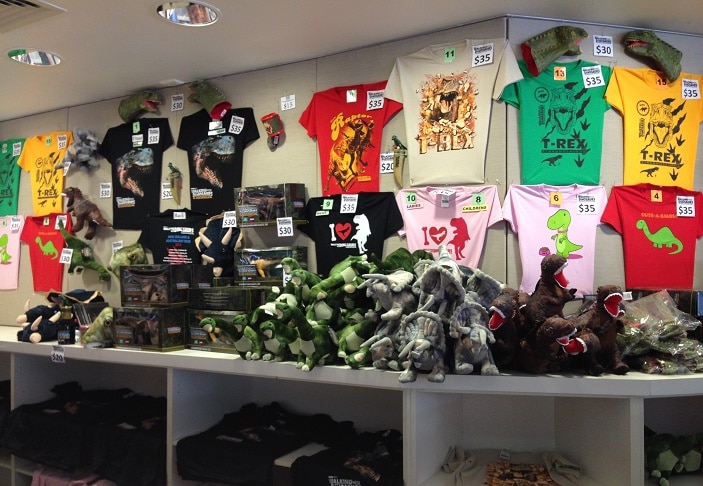 I like to discuss in reviews the reality of attending if this weren’t sponsored- would I have bought tickets? To be honest, I think I wouldn’t have mainly because I didn’t know it would be as impressive as it is. It is why I have taken the time to be as explicit and direct as I can in my language and the value that I believed it provided.  I expected quite mechanical creatures and I certainly didn’t anticipate the narration of the performance to be as engaging as it was. As an adult I wish it went for longer but as a child it was the perfect length.

I want to make sure parents understand how amazing this show was, without giving the whole thing away, because if anything I feel like there was very little I could find online in terms of reviews and photos to help me decide (which is probably why I hadn’t thought to buy tickets). Trust in my investment. I highly recommend you take the time to check out these photos, read the review and consider making it your family outing for the year.

Editor’s Note: I too took my family (myself, my husband, Miss almost 9 and Miss 5 1/2) to see this amazing show. Whilst not being a family of avid dinosaur fanatics (3 out of 4 in our house prefer glitter and tutus most of the time when we imaginary play), all four of us LOVED Walking With Dinosaurs! The immersive and educational experience provided was truly incomparable, and only betters seeing the real thing by the fact that we knew we were observing these dinosaurs safely from our seats in the 21st century. We will be jumping at the chance to see the show again when it returns to Brisbane in the future.

Visa Entertainment gives all Visa cardholders access to exclusive concert ticket pre-sales for concerts. Sign up today for free at visaentertainment.com.au and find them on Facebook. 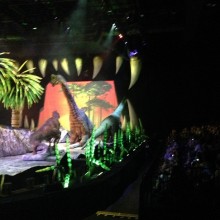 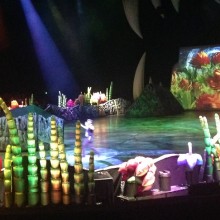 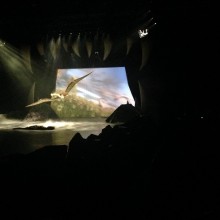 Ngaire Stirling
Owner and Founder of Brisbane Kids, Ngaire grew up in Brisbane and lives with her husband, 3 kids and many animals. She has marketing and teaching qualifications and spends her spare time growing vegetables and advocating for wildlife including koalas. She loves long summer days, bright starry nights and working on Brisbane Kids.