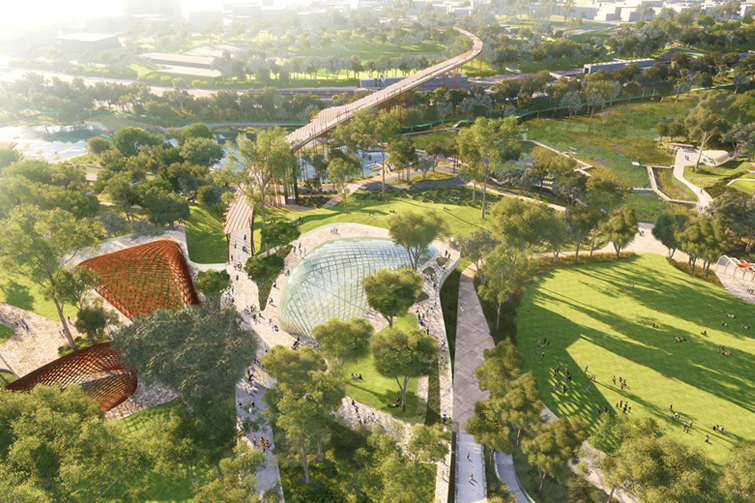 After almost a century, the Victoria Park Parklands are once again being opened to the public, with the former golf course recently transitioning into 45 hectares of new inner-city parkland.

Whilst only in the early stages of a what will be a whopping $83 million dollar investment by the Brisbane City Council, visitors are now welcome to pack a picnic, grab a ball and spend some time in the beautiful, manicured parklands.  Currently home to rolling green hills, a water hole, city views and a magnificent Jacaranda in a tree-lined gully, the Victoria Park Parklands is the perfect inner-city oasis for Brisbane families to enjoy. Initially, over the first few months of it opening, visitors will see Council sprucing up the park with early works including taking down fences, improving pathways, tree planting and opening access to Herston busway.  However, over the next four years the BCC has much grander plans for the enormous green space, with hopes to not only restore the park to its former glory and reconnect visitors with local history, culture and nature but also to bring more education and recreation to the area.

Lord Mayor Adrian Schrinner says the re-opened parklands “will eventually see waterholes and wetlands, nature playgrounds, an adventure valley and so much more. Importantly, the park will also involve a range of cultural and creative features – including a Visitor Centre which will explore Indigenous culture, landscape and contemporary history of the park.” So next time the sun is shining and your family is itching to get outside and make the most of our beautiful natural environment, why not head out to the newly re-opened Victoria Park Parklands?  And if it is a picnic you are hankering for, we have been told that these are some of the best picnic spots in the parklands. For more information or to view the Victoria Park Vision visit www.brisbane.qld.gov.au.