This North Brisbane Park at Upper Kedron, otherwise known as Upper Kedron Recreational Park, is yet another example of a suburban park that meets our tough standards to be considered a WOW playground.

Upper Kedron Recreation Reserve boasts an awesome playground with a climbing net that enables your Brisbane Kid to dive on in, which provides a thrill! There is also a jumping mat in the centre of the climbing area for kids to bounce on. The playground also has building structures, swings, slides and other quirky offerings to impress any child. We like that it is a suitable playground for the younger child, but the older child could still be amused for some time on the climbing net. Upper Kedron Park also has a fantastic Liberty Swing for those in wheelchairs. We especially like the colourful brick structure that has a lovely lighting feature in the middle. Upper Kedron Playground is also an ideal picnic destination with facilities that include shelters, two barbeque plates, plenty of seating, shade and toilets.

Little abseilers can climb to the top of the mountain, holding onto the rope as they go. Mini tobogganers can race each other down the side-by-side slides. The awesome climbing net will get Brisbane Kids caught up in the intricate web as they try to escape the giant spider. The abstract nature of the play equipment at Upper Kedron Park encourages the use of imagination and provides hours of fun.

Upper Kedron Park has wheelchair accessible toilet facilities and an awesome Liberty Swing (key required). Unfortunately, the Liberty Swing is not sheltered or shaded, however there are accessible paths leading across the playground under a vibrant rooftop with colourful paintings. Upper Kedron Park is surrounded by residential homes and, while being located on a road, it is not busy.

Another fantastic nearby Brisbane playground is Leslie Patrick Park.

Check out our list of other awesome Brisbane All Abilities Playgrounds for Kids for more parks with Liberty Swings.

This park review was updated in 2015. 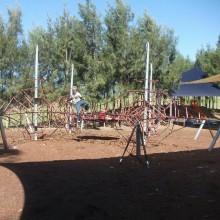 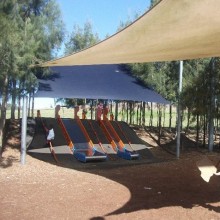 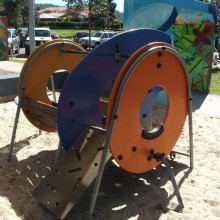 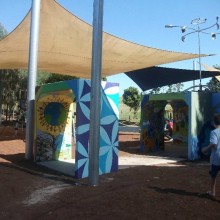 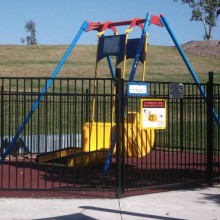 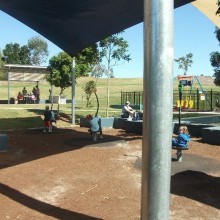