Home > Parenting 101 > Until What Age Should I Still Be Holding My Child’s Hand?

Until What Age Should I Still Be Holding My Child’s Hand? 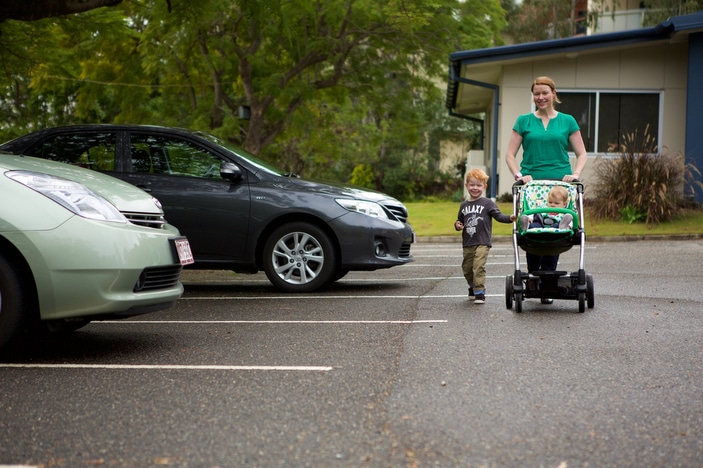 We all held our children’s hands around roads when they were really young, but do we let go too soon? QUT’s Centre for Accident Research and Road Safety — Queensland (CARRS-Q) recently conducted an Australia-wide survey of parents focused on keeping kids safe around roads and cars. The results will make all of us rethink our supervision of all children around roads.

The CARRS-Q research findings showed that, while parents will usually hold the hands of younger children, they are less likely to do so when:

CARRS-Q researcher Dr Alexia Lennon, said that as part of the research, parents identified situations in which they would or would not hold onto their child’s hand. ‘This included crossing at a supervised crossing, walking along quiet and/or familiar streets, when they are walking along a footpath, or when the parent’s hands are full with other items,’ she said.

The problem is that lack of sufficient adult supervision is an important factor in child pedestrian injury. ‘We wanted to demonstrate that in each of these environments [mentioned above], it was still the safest option to hold onto their child,’ Dr Lennon explained.

This is because, what may be surprising to many parents and carers, is that even older children still need supervision. Research has shown that, until the age of NINE, children’s perceptual and cognitive abilities are not sufficiently developed to enable them to make sound judgements when they are crossing roads. ‘It’s hard for them to judge vehicle distances and speeds. What’s more, many crashes occur when they are unsupervised, or they impulsively run out between parked cars,’ explained Dr Lennon.

In response to this issue, CARRS-Q has launched a new initiative to keep kids safe around roads and cars: Hand in Hand: Let’s go places. The campaign, supported by the Queensland Department of Transport and Main Roads, the Motor Accident Insurance Commission and the RACQ, is all about kids — children aged 3-9 — who are at risk of becoming involved in pedestrian/vehicle crashes.

The campaign is focused on encouraging parents and kids to go places hand-in-hand. ‘This campaign is about highlighting to parents just how important their role is in not only protecting their children around roads, but also teaching the lessons children learn at a young age about road safety, helps to build their foundations for later in life.

To help with this, CARRS-Q researchers have developed a range of materials all about the importance of holding hands around roads and cars, from a series of posters and flyers, to videos and a children’s activity sheet. Parents and carers can now visit carrsq.qut.edu.au/handinhand and download and print these resources for displaying in workplaces, schools or child-care centres. Hard copies are also available direct from CARRS-Q.

The Message of child road safety

Mark Bailey MP, Queensland Minister for Main Roads, Road Safety and Ports has praised this initiative for protecting children. ‘Young children are generally full of energy and can be impulsive. The message to parents and caregivers is to be aware of the danger presented by traffic and vehicles in carparks, and take the simple step of holding your child’s hand,’ he said.

Fellow project team member and parent, Clare Murray, understands the difficulty of holding children’s hands when your hand are already full, but offered this helpful tip: ‘By asking your child to hold on to something else attached to you, for example, a bag strap or pram, parents can keep hold of their child until they are somewhere safe, which we thought was important to include in the campaign materials, including a short video,’ she said.

The message to parents and carers is clear: Keep all kids safe, hold hands.

For further information on the campaign and to access and download the campaign materials, please visit carrsq.qut.edu.au/handinhand.