Home > Uncategorized > The only time stomachs are interesting

The only time stomachs are interesting

Goodness me, aren’t post-baby stomachs everywhere on social media at the moment?  It seems a few celebrities whipping up their tops to take a ‘telfie’ (tummy selfie) has inspired loads of other women to do the same thing in some weird this is what a REAL woman looks like kind of way.

Don’t get me started on the real woman tag. I’ve written about it before but in a nutshell, if you breathe and have XX chromosomes then you are a real woman; whether you do or don’t have stretch marks, wobbly bits, big bazoongas, itty-bitty bums, tummy aprons, or chook legs, or are a size 6 or 26. It’s a boring and unnecessary term.

Quite frankly, it’s all a bit of a snooze-fest if you ask me (even though you didn’t) and I just wonder why would women feel the nee—um, hang on a tic. I think I can take this in a new direction because if we’re talking about post-baby stomachs, let’s chat about IMMEDIATELY after you’ve grown and birthed an entire human being. That is interesting…

I suppose I can thank Hollywood for giving me the youthful and naïve impression that stomachs flattened out fairly soon after birth. As in, a few hours afterwards kind of soon. (I know — what an idiot.) It was only when I was 23 and visited a work colleague in hospital after she birthed her firstborn that I saw A LARGE STOMACH encased in a hospital robe. Could not believe it. That wasn’t like the movies! She still looked pregnant! *gasps*

Recently, I was watching my favourite television series (British drama Broadchurch) and saw something refreshing. God love the Brits for not shying away from reality, because one of the main characters had a new baby and in subsequent episodes over several weeks, was shown with a definite post-birth belly present under wardrobe. What a nice change. 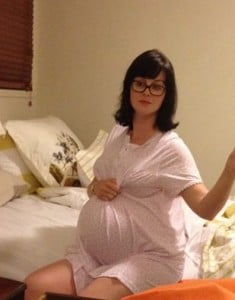 This was taken two days before I had my daughter. I was 23 kilograms heavier, uncomfortable, suffering badly from pelvic girdle pain, tired, cranky, visiting the bathroom 17 times a night, and (according to my husband) snoring — hence sleeping in the spare bedroom. Let’s not mention wearing a style of nightie usually preferred by pensioners. And some women feel sexy and attractive during pregnancy? PFFT. Surely the pained expression taken 17 months ago indicates that’s a big fat no from yours truly.

Anyway, I digress. Scroll back up and look at the size of my belly. Dear 24-year-old self, how on earth could you expect it to whittle down quickly? You twit!

Here’s a telfie again (far out, who am I?) of what I was rocking three weeks after giving birth: 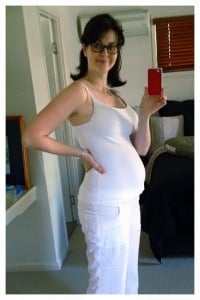 Yep, like my colleague all those years ago, it was a LARGE STOMACH that still looked pregnant. Surprise!

Now, every body is different during pregnancy. One of my girlfriends only put on eight kilos and has a slim frame. I asked her if she had the wibble-wobbles for a few weeks and guess what? The answer was yes.

Therefore, I can deduce from a detailed study of two women, that even if your babies were baked in the tummy-equivalent of a caravan (i.e. standard weight gain or less) and did not require plush surrounds (i.e. me), the jelly-belly is there in all its mooching glory for a while after giving birth.

I believe the correct name for it is a fundus.

For those reading this who’ve had children, it IS pretty fun, isn’t it? All the nurses and doctors palpate it whenever they see you, and sheesh, even I couldn’t stop prodding it; just floating around under the surface of your skin, all velvety and soft. It’s an odd sensation. (SIDE NOTE: But not quite as sensational as how rock-hard your chesticles becomes once the milk bar commences production, which is absolutely worthy of discussion and marvel with family, friends or strangers even though you’re normally quite a prude. *telling for a friend*)

And there you have it. In all honesty, the only time I think a stomach is interesting is during pregnancy and pretty soon after birth. I don’t care if you’re rocking a muffin top or a six-pack in the months or years following: they’re as dull as bottoms to look at, which is why I’ll draw the line at posting a pic of my tummy these days and leave that to others (I’m looking at you, celebs) who feel they must.

Oh alright, I’ll just give you a hint: it’s much smaller, very pale because it never sees the light of day, there’s a bellybutton smack bang in the middle that looks a little less like an O and more like an ~ these days, and two babies grew in there. The end.

Yours in fundus fun,