The Mill Petrie | Waterpark and Playground 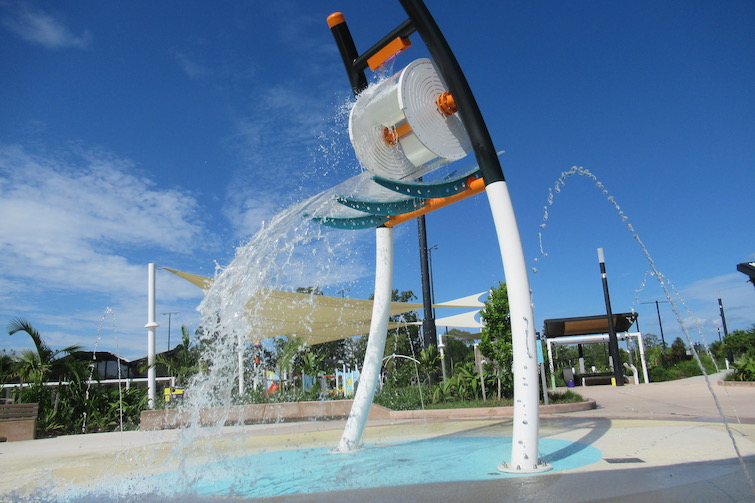 The end of 2020 saw the opening of a spacious recreation reserve in Petrie – The Mill at Moreton Bay. The space, which lies next door to the University of Sunshine Coast (Moreton Bay), is home to a free waterplay area, the oval and a terrific playground complete with picnic and BBQ facilities.

The $11.5 million development stands on site of the former Petrie Paper Mill, which was in continuous production from December 1957 until its closure in 2013. The Moreton Bay Regional Council purchased the site in 2015, and the rest, as they say, is history.

In a nod to the former Paper Mill, equipment depicting rolls of paper can be found throughout the play space on the adventure tower, tipping bucket and embankment slide (see if the kids can spot them.)

There are two distinct play areas at The Mill, which are separate to the water play area. A toddler play space and another area suited to the bigger kids. Between these two areas is a more universal play area. In the toddler area you will find a colourful fort which contains a slide, climbing nets, bridges, play panels, ladders and a tunnel. Little ones can clamber over the equipment, which is relatively low to the ground, and enjoy calling out to others as they make it up the steps or climbing nets. Between the toddler and older kids play area is a universal play space which is home to a spinner, embankment slide, nest swing, cone climber and accessible roundabout. The bigger children are well catered for with a massive adventure tower, which can be seen as you enter the area, standing at over 8m high. There are a series of levels in the tower which can be accessed by rope ladders and nets. Two tunnel slides help users exit the levels. From the lower level a straight tunnel slide available, whilst a twisty tunnel slide extends from the top level. The tower is made for children but can be accessed by adults if the need should arise (we’ve all had those times when your little one gets to the top but can’t get down and needs your help.)

There are several viewing spots from the tower which affords great views over the playground and surrounding areas. A single flying fox is situated beside the tower and will see children zooming back and forth, seeing who can go the fastest (or perhaps the slowest.) Children, especially toddlers and younger primary school age children, will love splashing about in the waterplay area at The Mill. Set on one level, which makes supervision easy, the water play area has several shooting fountains that spray water into the air. The kids will be squealing with delight as they move about trying to dodge the water jets or closing the gates in the shallow channels to halt the flow of water. At times the jets of water will lay dormant, waiting for just the right moment to shoot up, so adults, make sure you watch where you are walking! The main drawcard, especially for the bigger kids, in the tipping bucket. Situated at one end of the splash pad area, kids will be buzzing with anticipation as they wait for the cylinder to fill, trying to work out when it will tip. Given the large stream of water that comes tumbling out of the bucket, you need to pay close attention and make sure little ones aren’t under it when it tips. The waterplay zone is open 365 days a year but will close during electrical storms. The hours of operation are: If you plan on visiting The Mill at Moreton Bay, here are a few things to consider: The playgrounds are set on a soft rubber base and is flat, making access relatively easy. There is an accessible roundabout, which is fun for all abilities. Interconnecting concrete paths weave throughout the play and waterplay area, leading from the carparks, to the toilets, play areas and beyond. The splash pad area is flat, with several fountains shooting upwards as well as a tipping bucket. There are several designated disability parking spaces around the park and an accessible toilet, which is also home to a fold-down change table.

The Mill at Moreton Bay Features

How to get to The Mill

If driving, enter the USC Moreton Bay complex off Gympie Road and follow signs to ‘The Oval’ where there is off-street parking.

If catching the train, the playground is walking distance (approx. 350m) from the Petrie Train Station.

Alternatively, there are bike paths and plenty of bike racks, so riding your bikes or scooters is a possibility if you live nearby. Other mega playgrounds in the Moreton Bay Region include Pine Rivers Park and The Hills Playground at Arana Hills.

Pictures of The Mill Petrie Playground 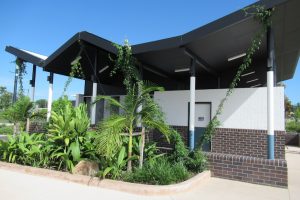 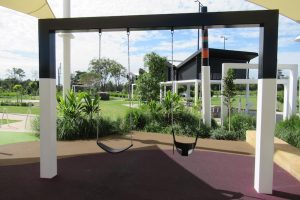 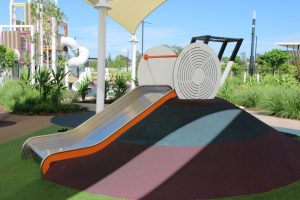 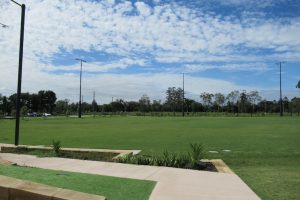 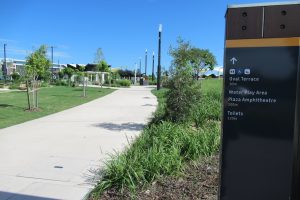 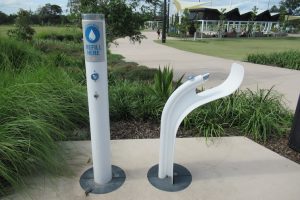 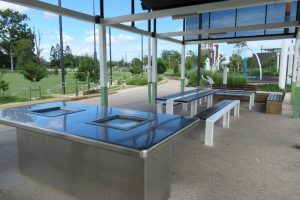 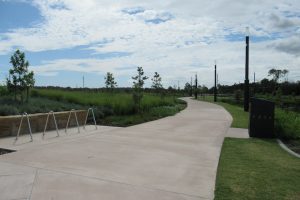 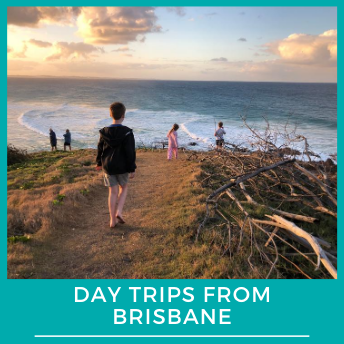