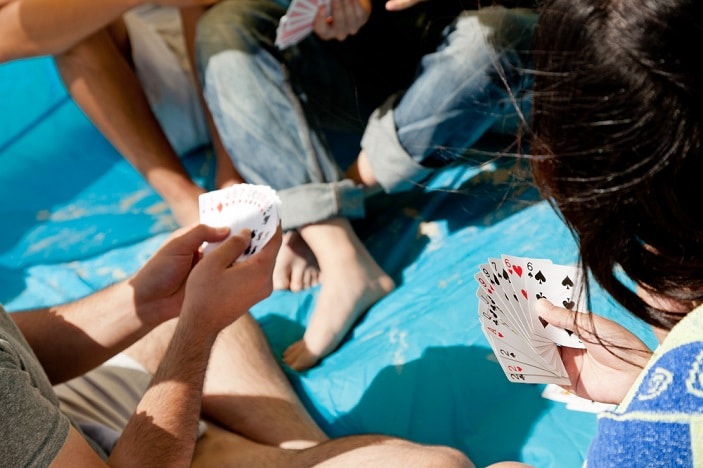 We’ve put together an awesome list of fun games that teenagers love to play. All that’s left for you to do is hand over to your teen to see what they want to do for their upcoming party. They may want some help with prep and organisation, but the beauty of teen parties is that the kids definitely don’t want you to run the show. So parents can take a step back on party day and let the youngsters have all the fun while we get to sit back and relax!

For a hilarious party game that will leave everyone’s head in a spin, try the dizzy bat race! To play, hold a cricket bat (or another similar sized item) upright on the ground, put your forehead against the top of it and spin around it ten times, then try to run to the finish line while your body tries to go in a different direction! This can be played as individually timed turns, two racing head-to-head, or even better, as a relay race with two teams.

This is an oldie but a goodie. Teens take it turns to have to either answer a truth question or complete a dare. To make sure the questions and tasks are age-appropriate and safe while still being fun, you can write these in advance. Then simply have a bucket for Truth and one for Dare and guests pick from either on their turn.

Teens love a good sing-along, and with karaoke versions of nearly all the latest hits available on YouTube, it’s easy to set up a fun karaoke lounge at home. You can score singers or groups as they do in your favourite TV singing talent show in order to reach a winner. Or play a game where each singer picks a word from a hat (you can each add a word before you begin) and has to sing part of a song with that word in. If they can’t think of a song, they’re out for that round, and the person left in at the end is the winner.

In this traditional outdoor game, players split into two teams, each with their own flag. The large outdoor space needs to have two clear zones (e.g. divided by a ditch, path, cones or rope) and each contains a jail area and base. The goal of the game is to capture the other team’s flag from their base and take it back into your zone, without being tagged and sent to jail. This is a really fun and active game but needs some house rules before you begin, so be sure to search up different versions online to see what will work best for you.

In this whodunnit game, players each pick a piece of folded paper out of a hat. The person whose paper has a letter M on the inside is now the secret murderer. Players sit in a circle and make eye contact with each other. When the murderer winks at someone, they count to five then pretend to die. The other players try to spot who the murder is (without discussing it). When someone thinks they know, they say, ‘I accuse’. The accuser asks for someone else to make a guess, and on the count of three, they both point to a suspect. If they pick different people or two innocent people, they are out of the game. If they both correctly pick the murderer, they win. You can also play this on a larger scale and have all arriving guests draw as they walk in and throughout the night the murderer or murderers go about their business, as people die they get given something to wear like a pin or item or scarf. Whoever guesses correctly throughout the night wins a prize!

Two Truths and a Lie

In this game, party guests sit in a circle. Each takes a turn to be the speaker and say three statements — two of which should be true and one a lie. The other guests then vote as a group to say which statement they think is the lie. If they guess incorrectly, the speaker wins a point. The person or people with the most points at the end of the game they win a prize.

This card game is fast and furious! To set up, sit in a circle and in the centre put enough spoons for every player minus one. Select a set of four matching cards (e.g. four kings) for each player, then shuffle the cards and deal them all out. Everyone passes a card to their left at the same time, and picks up the card from their right. The goal is to collect four matching cards then subtly pick up a spoon while still passing your given cards on so that no one notices. If you see another player pick up a spoon, you can secretly take one too. The last player without a spoon is out of the game. Then simply remove a spoon and keep playing till you have a winner!

This messy game is best played outside! Simply cover each coloured circle with something gooey of the same colour. We recommend washable paints or fun foods (think tomato sauce, blueberry jelly, custard and pesto!). It’s a slippery, slimy take on a classic party game! If you do the paint version, you could even provide plain white T-shirts for each party guest to wear and then take home as a party favour!

Paula Johnson
For over fifteen years Paula has worked as an editor and writer of educational books and support materials, working in England, Hong Kong and Brisbane. Now with two Brisbane Kids of her own, she enjoys spending time with her children, discovering new places together, making things and getting grubby … and sharing it all with our readers! She loves the fun and creativity of writing for Brisbane Kids and how it allows her to combine her two greatest passions — writing and mummying!