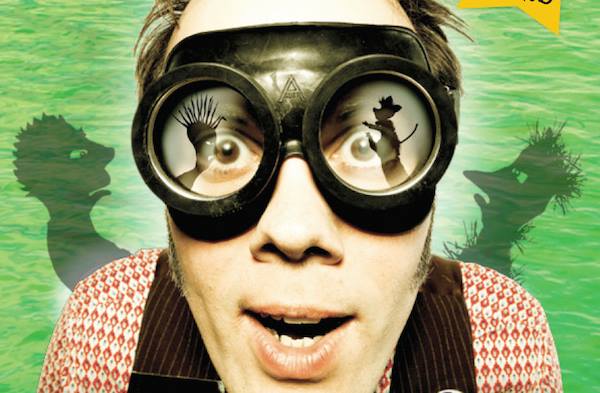 My only previous experience with shadow puppets is from my childhood when we would make them on the living room wall using flash lights during black outs, so I had no idea shadow plays could be so wonderfully captivating. Settling in to watch Swamp Juice at the Ipswich Art Gallery with no expectations meant this award winning show about life in a swamp was a very pleasant surprise.

As children are seated on rows of comfy cushions in front of the stage there’s time to take in the quirky junkyard set made from a variety of found items. The stage is cluttered with a mix of odds and ends. Boxes stuffed with household rubbish are stacked haphazardly while strung across the stage is a clothesline strewn with an intriguing mix of items. Is that a face I can see? Are those feet? What’s that strange looking tower to the right for? The excitement is building. 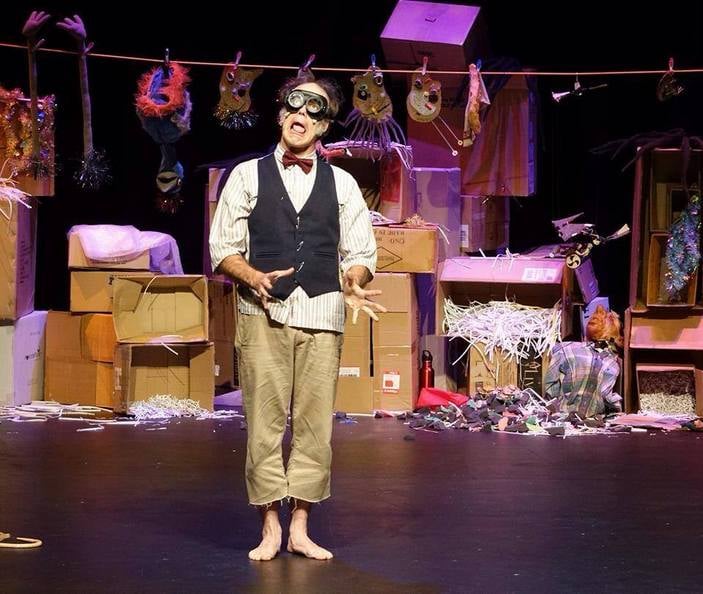 The lights dim and puppeteer Jeff Achtem takes to the stage mumbling gibberish and looking like a mad scientist; bare foot, short trousers, vest, bow tie, goggles topped off with wild wispy hair. This weird and wonderful puppeteer character is as much apart of the story as the puppets. He energetically moves about the stage making exaggerated sounds interspersed with few intelligible words. Achtem is not only a masterful puppeteer, he also creates zany sound effects and even his wispy strands of hair become a part of the show.

With all his tricks out in the open, Achtem switches seamlessly between setting the scene and bringing the shadow play to life on the large bed sheet-come-screen. The very clever and imaginative use of the stage and the three different perspectives on his ‘set’ stand allows for more creative and detailed story telling. Like the rest of the set, the diverse cast of characters has been created using household rubbish like tinsel, cardboard, scraps of material, string, foam, and gloves. Although they look ordinary under the lights they come to life on the screen and are very expressive and engaging for a flat black image! 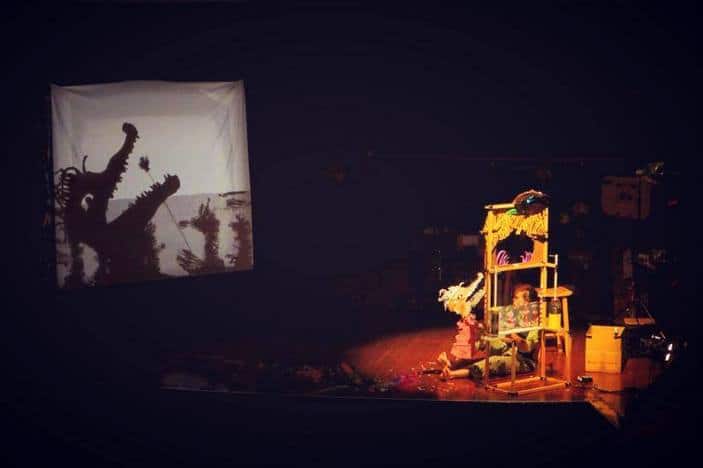 Swamp Juice’s simple plot tells the story of a despicable man cruising around a swamp in his boat catching animals and making them eat one another. First he comes across an amusing pair of bickering snails, then a snake and finally a bird. It’s during the man’s pursuit of the bird that they both end up in the belly of a swamp monster! That’s when things start to get really crazy.

Not to miss out on the fun, the audience gets involved with props like hats, branches, wigs, tinsel and toys that are passed around and both children and parents delight in using them to make shadows not only on the large screen on stage but the walls and roof. The final hilarious act is an exciting 3D chase scene where the wacky characters leap from the stage, flying in and around the crowd. If the squeals of delight from the children are anything to go by it’s certainly the most popular part of Swamp Juice.

The original musical score by David Henry, Nick Carver and Tristan Kelley sets the tone of swamp life perfectly starting with swampy sound effects of frogs and hooting birds and progressing to animated music ranging from comic to dramatic. 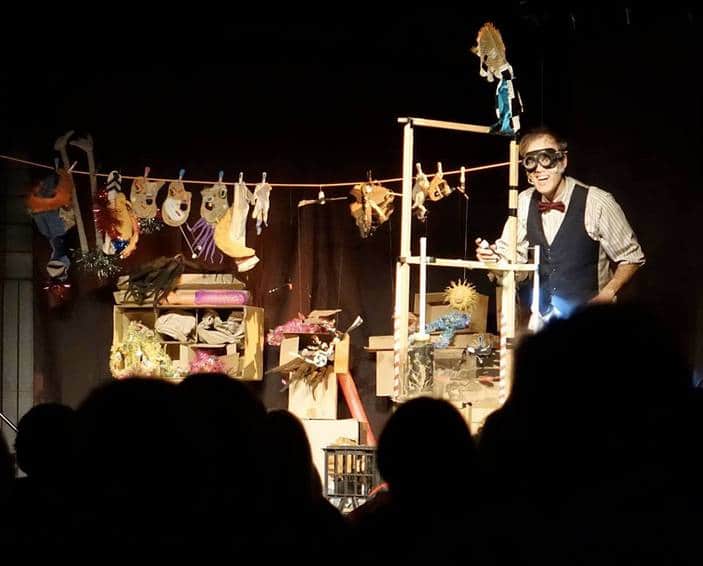 Swamp Juice was a delightful introduction to the art of shadow puppetry and has left me wanting more. This entertaining and funny glimpse into a wacky world is unforgettable. Although the show is designed for children, adults will get just as much enjoyment as the kids. Jeff Achtem is engaging and demonstrates exceptional skill moving the puppets, controlling the lights, and making sound effects all with perfect comic timing. The subject matter is a little dark at times but it is handled with wit and humour that has everyone laughing. Swamp Juice is sure to spark children’s imaginations and have them eager to get home to make their own puppets to create shadow play stories.

The Ipswich Art Gallery has a two craft areas set up for children so there’s a welcome distraction while you wait for the show to start. The gallery also has other great exhibits as well as a children’s gallery that are worth visiting.

Swamp Juice is on at the Ipswich Art Gallery from Tuesday 29th March to Saturday 9th April 2016. (NO performance on Monday 4th April). There are two 45-minute shows at 10.30am & 1.00pm daily. Tickets cost $7 per person (FREE for under 2s not occupying a seat). Bookings are essential. For more information and bookings click here.

Jeff Achtem is the artistic Director of Bunk Puppets and has produced other wonderful shows including Sticks Stones Broken Bones.