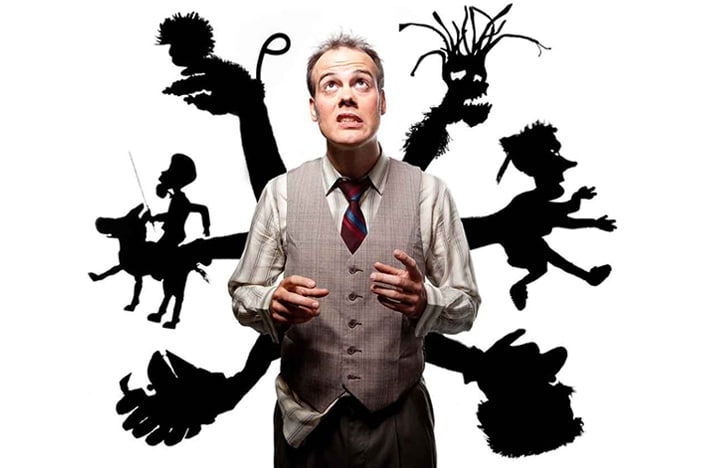 THIS SHOW HAS NOW FINISHED.

When asked to review the latest offering by the Ipswich Art Gallery this week there was very little hesitation in my mind that my children would be in for a treat of some sort.  Coupled with the fact that this gallery has always been high on my list of places that never fail to provide a brilliant program of shows and exhibits for the little people in my life, I had also found out online that the puppet show we were seeing, Sticks, Stones, Broken Bones had had its run extended until July 11th due to popular demand.  With my interest suitably peaked it was therefore with much expectation and intrigue that I loaded our car and drove to the centre of Ipswich.

Even with such high expectations afloat though this still did not stop me from being caught off guard by just how much the following 45 minutes would entertain, enlighten and enthral not just my children – but surprisingly me as well.  For from the moment the lights dimmed and Jeff Achtem’s scattered character came mumbling into the room behind us I found myself just as drawn into his crazily creative, wonderfully enchanting and absolutely hilarious world as the sea of delighted children surrounding me. 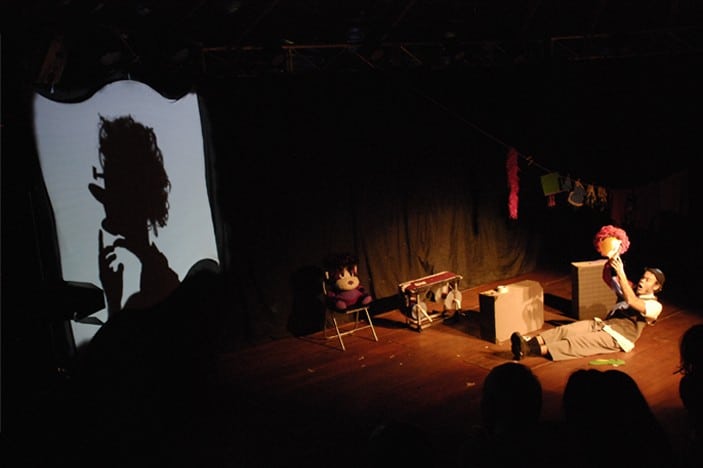 To simply describe this as a shadow puppet play would be a massive understatement.  Unlike any I have seen before, Achtem has created a show where we are entertained just as much by the character of the puppeteer himself as we are by those puppets he creates.  If not, dare I say it, even moreso.

We are first introduced to the wispy-haired and quirky character Jeff has created as he weaves himself, mumbling, through the crowd to the stage.  His voice is low and gruff and his dialogue is a stab of words directed absently at those around him.  The audience is immediately mesmerised by this unsettling yet very funny character and as he removes his shoe and holds it up to the audience a hushed air of expectation descends.  “Look at this, look at this.  Look here” he mutters quickly and repeatedly in his insane manner.  And we do.  We watch as this mad-scientist-like character creates a series of what appear to be bizarre and random objects with the audience’s assistance.  A pen taped to the end of his shoe.  A balloon with a Mohawk of tape that he expertly snips at with scissors for an end result that looks like nothing special at all.  Except it is.  A light flicks on, music starts and these ordinary objects are transformed into the extraordinary.  For they have now taken on the life of intricate and detailed characters, their form instantly recognisable in the cast shadows on a screen set off to the side of the stage.  And like watching a magician sharing his secrets the audience is instantly captivated and in awe as our eyes move between the puppeteer who manoeuvres these simple objects before light and the brilliant characters and tales they portray on the screen. 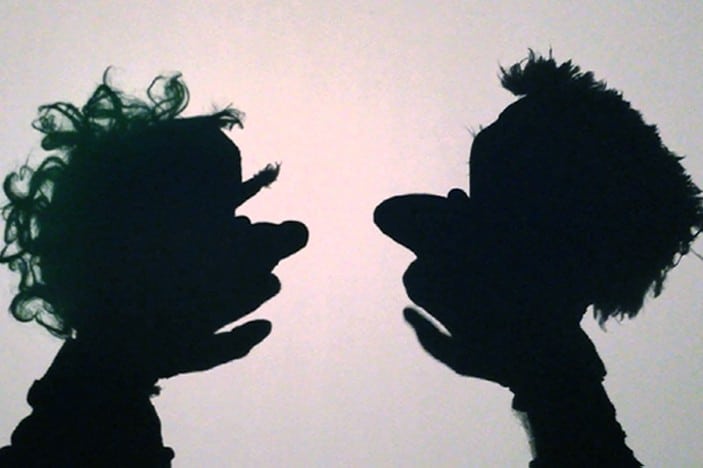 Ashtem himself is a masterful performer.  He moves seamlessly between creating different objects comically for the audience before the light is flicked, the music starts and we are transformed into yet another magical shadow play using the newly created props.  The plays themselves are enchanting.  Short but sweet and in some places dark and disturbing but always with humour and beauty.  At one point an adult is chosen from the audience.  He is put through a range of comical actions before it becomes apparent he will star in one of the plays alongside a shadow co-star.  What ensues is an absolutely hilarious skit where the two boxers, master and student, meet and fight complete with slow-mo Matrix-like acrobatics.  The audience is sold and it is obvious to all that Jeff not only has great talent but also much passion for what he does.

At one point in the show as Achtem is laying along a bench on his back, his arms and feet raised high as toes and hands clasp a mixture of random objects that by now we await eagerly to be brought to life on screen he turns to the audience and asks casually “so what do you do for a living?”.  A ripple of laughter breaks forth as we look sympathetically at the awkward position he rests in.  It is only when he follows this with a mumbled “boring…” that we realise the laughter is at our own expense and he is right.  For, at that moment, caught between the sights, sounds and world he has captivated us with and drawn us so willingly into, you believe completely that to be doing anything else right then would indeed be dull by comparison.

As the show nears its end we are gifted with a “one last one?” request.  The response? A  resounding “YES!”.  And as we watch this final, magical character come to life before us Ashtem once more captures the hearts of his audience.  He dances patterns of light off the ceilings and walls, fans bubbles into the crowd and onto the screen and you can feel as much as see that the room is smiling alongside the character on stage.  Just before the room goes black Ashtem steps forward and reminds us that, no matter how old we are, never forget to make time to play.  And you realise, this whole time, that’s exactly what you have all been doing.

Be Inspired To Create!

Afterwards, as the crowd mills out you have the opportunity to meet Jeff in the foyer, ask him questions and buy a mini shadow-puppet introduction pack if you like.  Understandably, the area was packed and I have to admit I may have bought an extra pack for me as well.

Finally, arms laden with our latest props, minds overflowing with pure (obviously) creative genius and hearts filled with passion for a new-found hobby my little family loaded ourselves back into the car and drove home to Brisbane.  What started out as a day trip to see a little 45 minute show at the much-loved Ipswich Art Gallery had resulted in a car-full of excited chatter and plans for our first big performance show at home.   The kids (and I) were inspired, their eyes and minds filled with wonder and I couldn’t wait to see what little shadow puppet show they would create.  Heck, I might even have to take part in it myself! 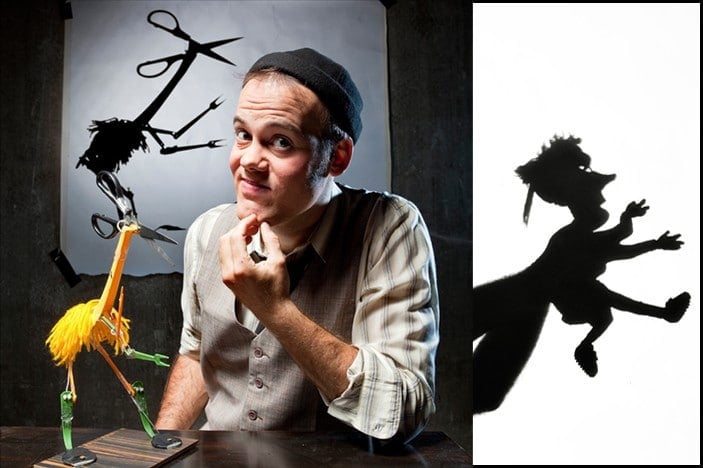 It’s almost hard to believe that so much awesome could be squished into just a 45 minute show.  That it appeals easily to all ages – including adults – makes it even more of a winner but the fact that all this costs only $7.00 per person makes it somewhat insane for you not to get to Ipswich and check it out during the school holidays.

Early on in the show it may seem quite dark as one of the first shadow plays sees one character performing a brain transplant on another.  This is all done with great humour though and as the show progresses the fun, imagination and playful themes definitely take over.  I took two small girls aged 5 and 3 year old along and we all absolutely loved the show.

The fact that it is being shown at the Ipswich Art Gallery where there are an abundance of other great exhibits and child-focussed activities running as well makes this a great option for any family looking to fill a whole day with wonder for their little ones.