Take a five-minute drive from the peanut capital of Queensland, Kingaroy, and you’ll find yourself at the Kingaroy Observatory, which runs regular day and night shows for families.

Astronomer James Barclay and his wife Lyn funded the observatory themselves, making it the largest self-funded astro-tourism business in Queensland. And what a treat it is for families who love stargazing!

Night shows at the Kingaroy Observatory

Located at the Kingaroy Airport, well away from interfering city lights, the delightfully eccentric James takes guests on a galactic journey through the cosmos, with a little help from his (registered) green laser pointer, and three 35cm (14 inch) Meade Schmidt Cassegrain telescopes.

Brisbane Kids was invited to join James for a night show in May 2018. After ushering us into his Star Theatre, which can seat up to 70 people, James introduced us to the wonders of the universe, explaining what we could expect to see that evening.

With the promise of viewing the moon’s cratered surface, as well as various stars, planets and constellations, we excitedly made our way outside to the observation deck, which can seat up to 45 people.

Cloaked in his glow-in-the-dark cape, James began to fire up the telescopes through which we could see double and binary stars in fine detail, as well as giant globular clusters, star forming gas clouds of nebulae and far away galaxies. As James explained, it was like going on a journey back in time, as these wonders are located so far away from us, and the light we see is millions of years old.

Over the next two hours, James continued to provide detailed commentary on what we were seeing through the computer assisted telescopes. Undoubtedly the highlights for our family were seeing the rings of Saturn and the giant gas planet of Jupiter with its belts of colour and four bright moons. Being Autumn, we were also lucky enough to see the constellations of Leo and Scorpio.

Day shows at the Kingaroy Observatory

On any sunny day, you can sit and watch in safety our nearest star (the sun) up close on the big projection screen, via a colour video camera from a solar telescope outside. Visitors can see the real surface of the sun and huge plumes of plasma streaming off the sun’s fiery surface into space. School groups, including home schooling groups are most welcome to book in for day or night shows. 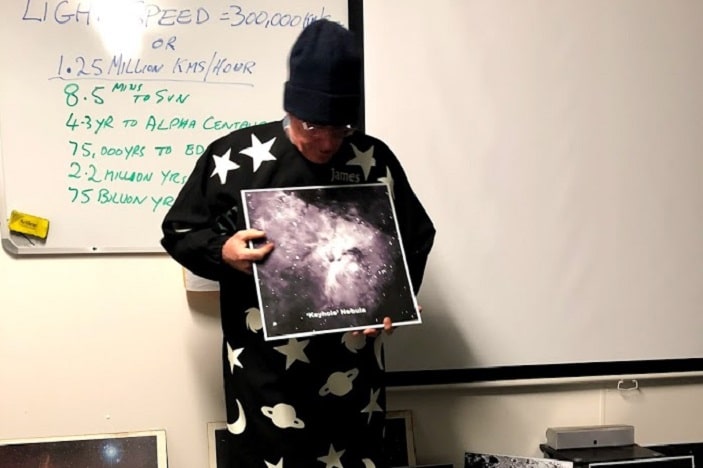 Plan your visit to the Kingaroy Observatory

Night Shows begin at 7pm between 01 March and 30 September, and 7.30pm between 01 October and 28 February. Bookings are essential and payment can be made by cash on arrival. Children must be over five years of age to attend. The observatory is wheel chair friendly as there are no steps, only ramps. Each telescope can be raised or lowered to suit the height of the observer.

No shows are conducted over a full moon period as dark, cloud-free nights are best for viewing nebulae, star clusters and galaxies. Different planets such as Venus and Mars are best viewed at certain times of year, so check the website for details. In the cooler months, be sure to rug up as temperatures can drop significantly at night.

Mars will be at its closest point to earth in 20 years on 27 July 2018 at midnight. On this night, it will be possible to see the red planet’s polar caps and land markings through the observatory’s powerful telescopes. Jupiter and Saturn will also be viewable. The observatory is holding a special one-off show from 6pm – 7pm and then shows on the hour until 1am. Cost is $20 per adult and $10 for children over five years. Bookings are essential, and cash payment will be collected at the door.

Kingaroy is a three-hour drive northwest of Brisbane. The Kingaroy Observatory is located three kilometres from the Kingaroy township, along Geoff Ralph Drive (off Warren Truss Drive). For more information, phone (07) 4164 5595, email [email protected] or visit their website.

Cath Johnsen
Cath loves to explore Brisbane with her husband, three kids and two four-legged family members. She is a regular contributor to Brisbane Kids, and loves the outdoors, reading, travelling, and of course, writing. You can see more of her work at www.cathjohnsen.com.au.