Jack is almost 7 and he needs new shoes, for school and for general play. It sounds fairly straight forward but it’s something as a mother I don’t look forward to at all.

Preparation for our shoe purchase begins weeks before the actual event. I drop hints around how smelly his shoes might be (in a laughing way), I talk about how awesome it is to have new shoes that make you “super-fast”. I just keep talking about new shoes pretty much every day for atleast 2 weeks. 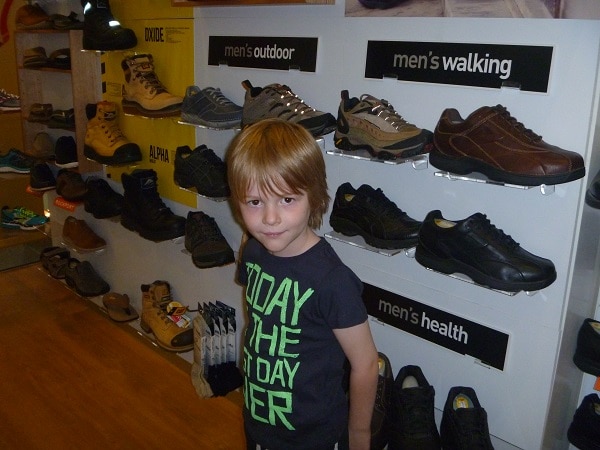 Jack isn’t good with change… actually, that’s not entirely true. He is notoriously inconsistent with his responses to change and so I always prepare for the worst which is possibly why he tends to do so well. Jack is on the spectrum, he has a condition which makes his thought processes a little different than other kids, and it makes him super awesome too. He is also a little sensory challenged, processing touch differently which is why he doesn’t wear socks very often. He also does other things that I find fascinating like walking into people because he can’t sense distance and hugging the wall as he walks through shopping centres as a coping mechanism to crowds.

When Jack was little I have memories of screaming tantrums in shoe stores. I learnt pretty early on I was better off going to a quality shoe store with one exit point, letting them know possible nightmare outcomes AND most of all buying shoes that would last as long as possible so I didn’t have to go back.

What I look for in a child’s school shoe

–       Jack is almost 7 and about to start year 2. So far we have bought 5 pairs of school shoes. 3 he refused to wear AT ALL, and 2 he wore for a year each. I learnt that NIKE have a really cool tick that Jack seems to associate with a thumbs up, he likes the velcro too and so do his teachers. Now- I am pretty lucky to get away with his shoes lasting this long because according to The Athlete’s Foot children’s feet change up to 34 times before the age of 11- I find this incredible! 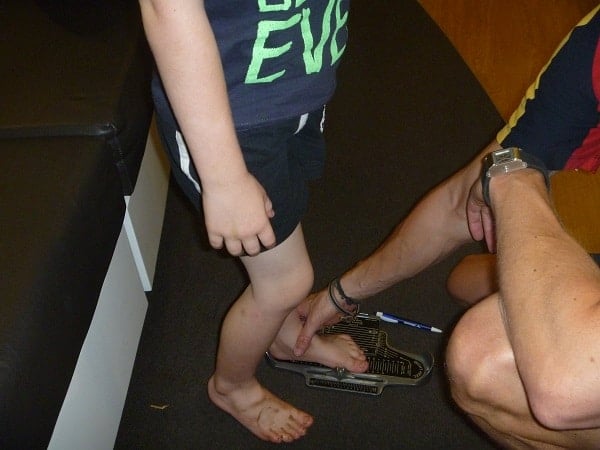 So for me- I need hard wearing, velcro shoes with a feature that grabs Jack. NIKE tick all the boxes for me (no pun intended) and despite the fairly hardy price point I am confident that they will last twice as long as cheaper shoes making them affordable for me.

Where I go to purchase children’s shoes in Brisbane

This year I went to The Athlete’s Foot Chermside. We went on the first day of school holidays because Jack’s current school shoes are also his day to day running shoes and they were so smelly they threatened to kill me every-time I picked them up. So it was time. The Athlete’s Foot not only sell NIKE but you can also get Ascent and Clarks- I am just not game to change brands at this point. I am just grateful that Jack will wear shoes! Ha!

What I do to make it easy when shopping with kids

We went first thing in the morning, before the shop opened and we walked past it three times before we went in. We talked about the shops surrounding it, the colours in the shop, how everyone was smiling. I even pointed across the shop at the kids shoe rack and said “WOW Jack – they look like they are going to have some cool shoes!” – he smiled and he was excited. 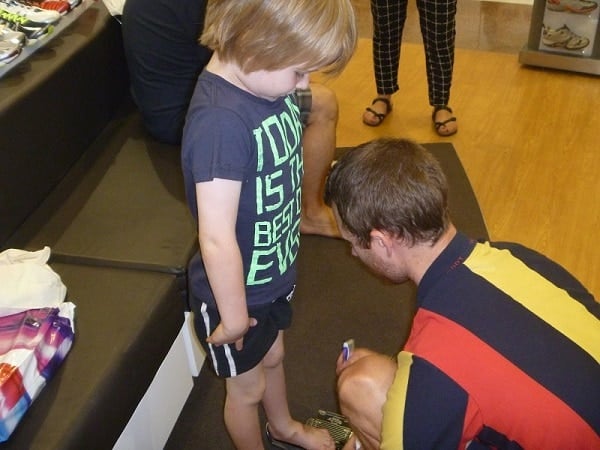 Why the shop and shoe technician is important

The Athletes Foot is a quality shoe store to me because I know that all the foot fit technicians go through special training with podiatrists and health professionals.

How a shoe fitting works

Jack doesn’t wear socks when trying on shoes because the sensory input would stress him more. Luckily Ben from The Athlete’s Foot was understanding to his dirty feet and Jack relished in the cool of the metal foot sizer. He was interested to know his feet were not the same size. I LOVE that Ben engaged him in this conversation.

We were moved to the FITZI which is their shoe fitting technology that watches the way you walk and ensures that there are no major issues. They have a really cool electronic tablet that fascinated Jack as it demonstrated through colour the way that he walks. It showed both actual video and a heat type sensor showing how his foot print was made. 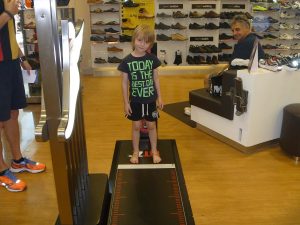 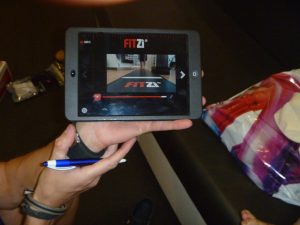 NIKE was a good choice for us because they are a thin shoe and Jack not wearing socks means thin works for us. Ben even allowed Jack to wear the shoes from the store as it became clear from the moment he put them on that they were not coming off. Despite the crowded shop he sped and zoomed around through the people like a rocket which is pretty much validation that the right shoes were chosen.

For the record he didn’t take those shoes off until 8pm that night when he had a bath.

The Athlete’s Foot are not a cheap shoe store but they are a quality shoe store and while I will hunt for second-hand uniforms and books I just don’t compromise on shoes. I also know from my second child Tom, that all kids are not created the same because Tom’s gorgeous chubby feet do not fit into a single pair of Jacks, so a correct fitting is important to me.

What I liked about them most was the number of people on hand they had to help fit shoes. I liked that Ben looked my son in the eyes and engaged him in his purchase. I especially appreciated their willingness to discuss technical details to an almost seven year old. To find out more head to their website www.theathletesfoot.com.au. They are also creating a special school zone area to discuss specifics of choosing children’s shoes here www.theathletesfoot.com.au/back-to-school

Message From The Athlete’s Foot

As Jack has a narrow foot, it’s important to remember that any fitted shoe should support his structure. Fitting a wider foot type is generally easier than an excessively narrow foot type, but there are multiple width fittings in most shoes. It is important to fit the shoe for width as much as it is for length.

Like Jack, some children experience extremely sensitive feet which can result in them finding it difficult to tolerate any socks and footwear. It is important that with these children the risk of any skin irritation is reduced by ensuring that socks do not have large seams and that footwear fits very well. In children like this correctly fitted shoes are the key to eliminating irritation.

Is this a sponsored review!? Yes, it is- but all these opinions are my own and I have purchased many shoes through The Athlete’s Foot at Chermside for myself. Have I bought kids shoes from The Athlete’s Foot before? No- but that’s because I didn’t know they sold NIKE. I also didn’t know they sold Ascent which would be my other choice for running shoes or Clarks for a more formal shoe. Was I going to buy shoes anyway? The offer to trial their FITZ was great timing as we were due a new pair of shoes- if anything I could have gone in a couple of weeks earlier as Jack’s other shoes were on their way out (more the smell than the wear). SO, in summary, I was very pleased with the experience and of course I would happily shop there again.