According to Queensland Health, more than 3500 people have contracted Ross River Fever from mosquitoes since January this year, including a large number from Brisbane and surrounding areas.

We asked Associate Professor David Ward, an expert in tropical medicine, how Brisbane families can avoid infection, and the symptoms to look out for if you have been bitten by mosquitoes.

What is Ross River Fever?

Ross River Fever (RRF) is an illness caused by the Ross River Virus (RRV) and is transmitted by mosquito bites. It is probably transmitted from animals to humans (lots of animals have antibodies) but no one knows which ones are the culprits – probably possums, kangaroos and wallabies! It is not contagious between humans.

What are the symptoms of Ross River Fever?

RRV causes a “flu-like” syndrome with an emphasis on joint pains – mainly fingers and toes, hands, wrists, elbows, ankles, knees and back. Most people will have a fever, fatigue and joint pain/swelling. RRF used to be called “epidemic polyarthritis” because there would be sporadic outbreaks of people suffering fever and bad joint pains (50,000 in one outbreak in the 1980’s). About half will have headache and patchy/spotty rash. Less often they can have sore throat, swollen glands, nausea, abdominal pain, muscle pains and stiffness. Usually it only lasts a few weeks, and 90 per cent recover completely within six months (usually it is the joint pain and stiffness that persists longest). About 10 per cent can get a chronic fatigue and joint inflammation that occasionally lasts for more than 12 months. 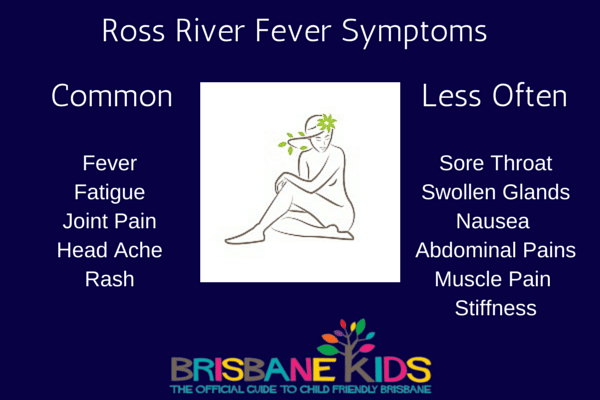 What is the treatment for Ross River Fever?

The treatment for RRF is rest, regular paracetamol and NSAIDS like ibuprofen, and sometimes splints for very painful joints. There is no cure, specific treatment or vaccination. The big problem is that the syndrome looks very much like many other illnesses, especially at the start. Influenza, meningitis, immune diseases like rheumatoid arthritis, and some other infections like Q fever can present in similar ways, but they can be life threatening or at least very serious and their treatment is different. That is why if someone thinks they might have RRF, they should see their doctor. A blood test will confirm the diagnosis.

How can we prevent Ross River Fever?

The only way to prevent RRF is to avoid mosquito bites. Stay inside at dusk and dawn, wear long sleeves when outside, use repellents, ensure there are screens on windows, etc. Drain ground water and empty out stagnant pots to reduce mozzie breeding habitats. Interestingly, about one third of children who contract Ross River Fever will not show symptoms.

Why has there been a spike in cases recently?

With over 3000 cases reported, and many more undiagnosed or unreported, this makes it the largest outbreak in Brisbane since the 1980’s. It is due to the increased mosquito numbers – particularly from heavy rainfall, high tides and flooding. Local councils have been working hard to reduce numbers through spraying programs, but as we have seen, that is not enough!