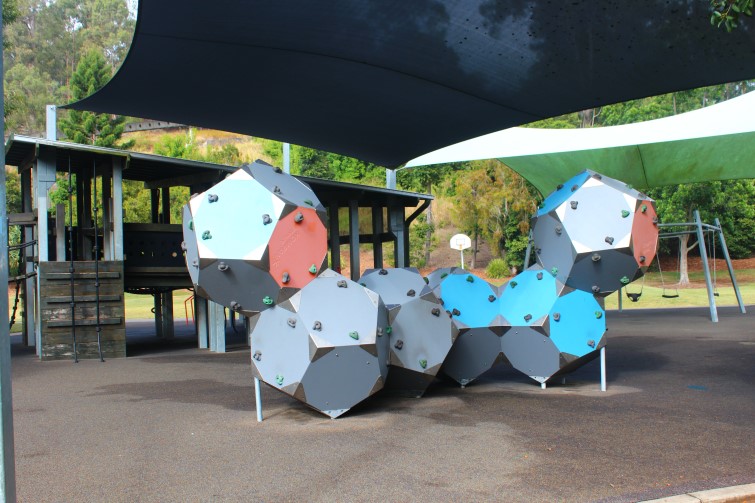 Rocks Riverside Park is huge and will amaze even the most astute playground lover, with something on offer to please every member of your family, including waterplay, playgrounds for different ages groups and a Liberty Swing. Rocks Riverside Park could be classed as a hidden gem, except for the fact it is so popular!

Its popularity has led to plenty of signs directing people to it from the surrounding roads, and yet it is hidden away amongst industrial buildings and warehouses. The entrance to the park can sneak up on you, but once you drive down the road, you begin to wonder how you could have missed it. This place is huge: multiple areas, plenty of play equipment, and a wonderful water play and splash zone.

This water play and splash zone are a big drawcard during the warmer months. Kids can play in shallow water, run in and out of the fountains when they are activated, send boats down the watercourse, or relax in the man-made rock pools. It is a paddling paradise! While it is not completely shaded, there are multiple shade sails, covering most of the water play area.

In winter, or if water play is not a drawcard, there are two fabulous playgrounds, each aimed at differing age groups. Firstly, there is a massive fort aimed at bigger kids, with so many climbing and exploring options. Even better, this is a mostly covered fort, so lots of shade, with additional shade cloths nearby. There is also a flying fox, giant climbing net, swings, bike paths, exploration paths, and even a half basketball court! Then there is the fenced younger kids’ area, aimed at those under 6. Within the fenced area, there are two smaller forts: a toddler fort and one for those slightly bigger kids. A decent-sized sand pit is also within the fenced area, with a sand table and push-button water tap to help with the sand creations. Toddler swings, bouncers, and safari car seat all add to the fun to be had here. The entire fenced area is under large trees, so is well-shaded most of the day.

Just outside of the fenced area is a Liberty Swing (key must be obtained from the Jamboree Ward Office of Brisbane City Council, phone: (07) 3407 7000). The fenced playground area has a distinct jungle theme. The bigger fort allows kids to climb onto an elephant’s back and slide down his tail. The toddler fort is beautifully decorated with leaves, flowers, butterflies, and beetles, with the safari car nearby to ‘drive’. The awesome flying fox will have bigger Brisbane Kids swinging through the skies like Tarzan.

Walking from the fenced area, through the water play area, you get a sense of a rocky beach from the man-made watercourse, leading to a shady boardwalk seating area. The waterpark features of Rocks Riverside are awesome for little adventurers navigating the river rapids as they slip downstream. Just beyond that is the big kids’ fort, with its nautical feel, just crying out for sea captains and pirates to climb aboard. On top of the wonderful Liberty Swing for wheelchairs, most of the paths at Rocks Riverside Park are wide, concreted and in excellent condition; perfect for both prams and wheelchairs. Some areas are a little hilly, but still easy to navigate. The toilet facilities are excellent, with two wheelchair-accessible stalls (one with change table facilities also), two ambulant stalls and four standard-sized toilets.

The green spaces are large and well-cared for, allowing for great games of cricket or footy to be played. There are also several picnic areas with barbeque facilities and shelters around the green space, plenty of water bubblers, and waste and recycling bins in multiple places. The Brisbane River is adjacent to Rocks Riverside Park, though it is some distance from the playground and waterpark areas.

This is a place where you could easily spend an entire day. Make sure to pack some food though, as its location means there are minimal places to purchase food, and certainly not within walking distance. Another great nearby Brisbane Playground is Biami Yumba Park. 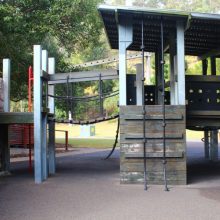 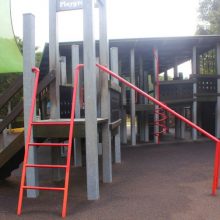 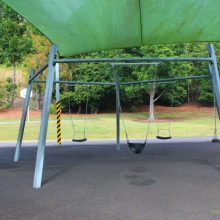 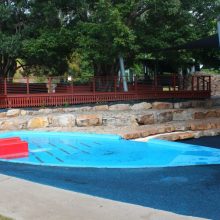 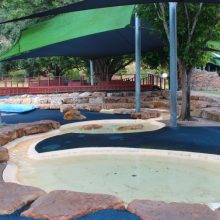 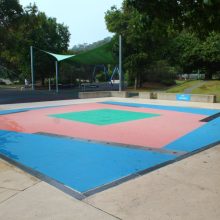 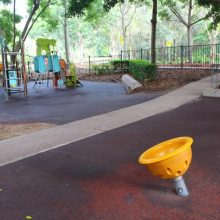 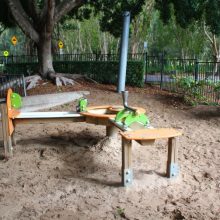 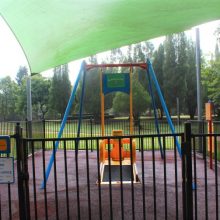 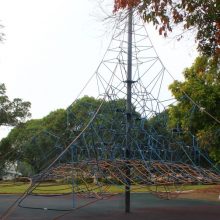 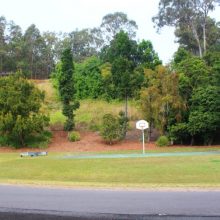 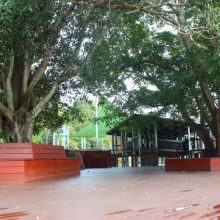 Be sure to check out our other reviews of Brisbane All Abilities Playgrounds for Kids that contain Liberty Swings.