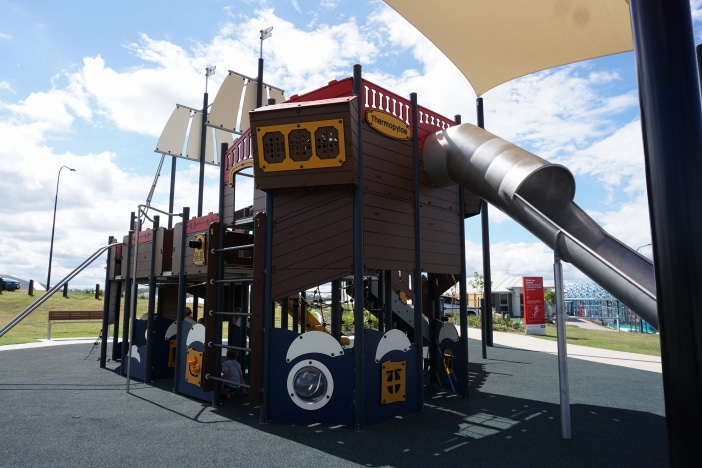 If you have a pirate mad child at home, this is a playground you need to add to your parks bucket list. For hours of pirate fuelled fun, set the sat nav and head west to Flagstone Pirate Ship Park.

Flagstone Pirate Park is probably one of Brisbane’s best pirate-themed playgrounds. It has an 18-meter-long, two-level pirate ship suited to kindergarten and primary school-aged kids. 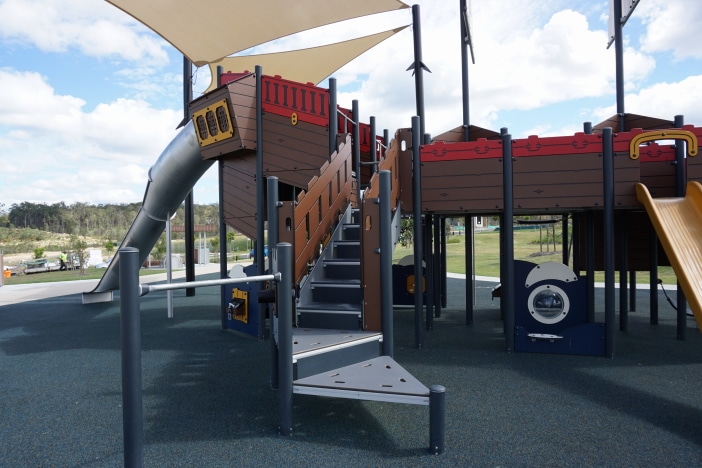 The upper level of the structure is easily accessible by stairs and cargo netting. It has a double plastic slide for racing and a single, super-fast metal slide for the daring. Another way to descend is the fireman’s pole. The upper level also has a suspended balancing board, which we’ve not seen before. 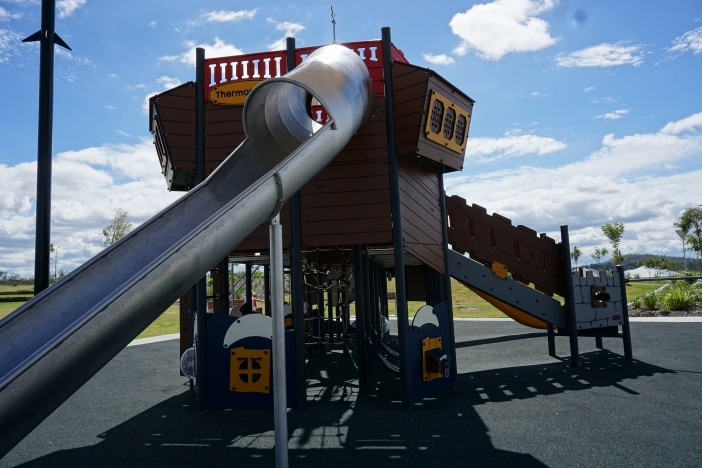 Underneath the pirate ship are numerous small hammocks for when the pirates need a quiet minute or two. There are also treasure chests to hide new treasures in, a letterbox to send maps through and an interactive wall.

Adjacent to the pirate ship is a swing set with a standard swing and a toddler swing. There are also small rubber mounds to climb. A grassy knoll offers an excellent place for a picnic, rolling down the hill or a game of tag. Hidden about the play space are markers as part of a treasure map. See if they can find them all. 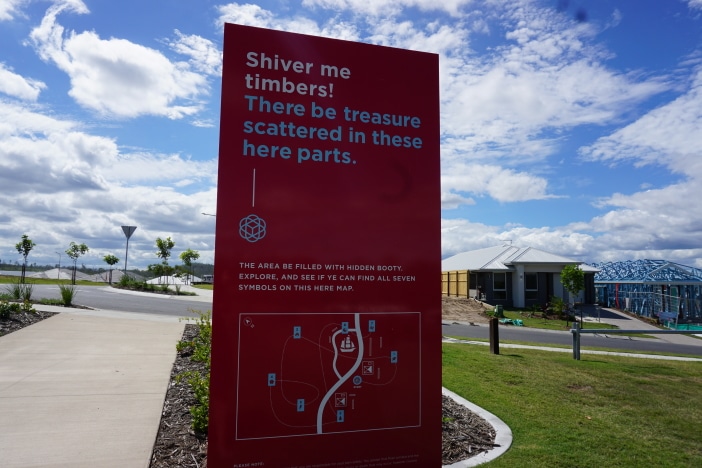 It’s hard to find anything more inspiring than a giant pirate ship. Let your little pirates run amok, sail the seven seas, start a mutiny, peer through their spyglasses, fire cannons, search for lost treasure, hide new treasures in the treasure chests, steer the ship to safety, jump from island to island, climb the cargo nets, escape sharks and slide down the slides. Then watch them do it all again! 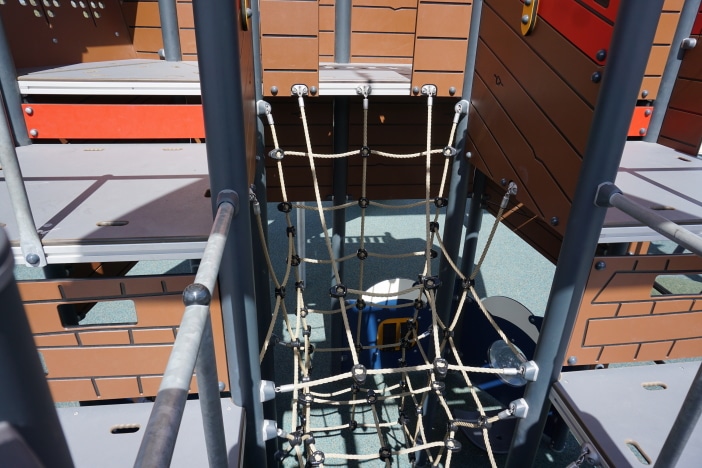 Flagstone Pirate Park is a fantastic playground but it’s not particularly inclusive for those with physical limitations. There also isn’t a lot for toddlers to do independently. Toddlers will be able to access the upper level of the pirate ship; however, they would need to be within arm’s reach because of the gaps in the flooring.

As the park is situated in a residential estate, there isn’t a carpark for the playground, nor is there a toilet and it is unfenced. Three sides of the playground are roadways. Owing to the size of the structure it is partially shaded; however, the surface of the pirate ship can become hot. Shoes would be essential in the warmer months and during peak UV times. It would be ideal for visiting outside of these times. 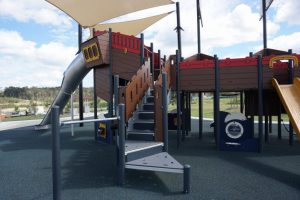 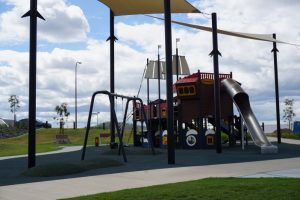 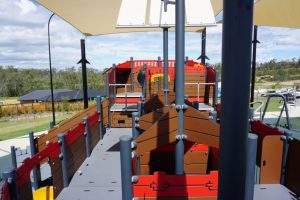 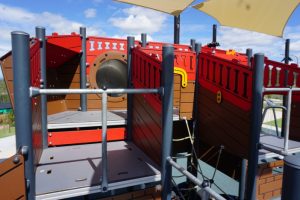 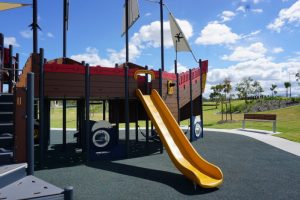 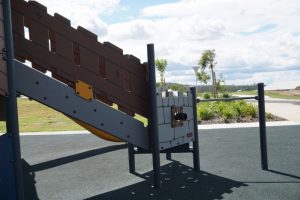 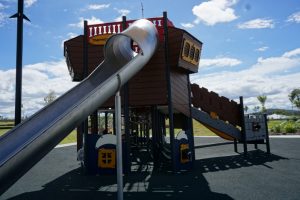 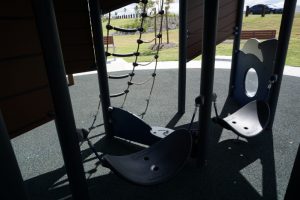 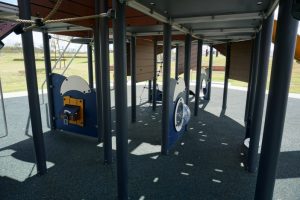 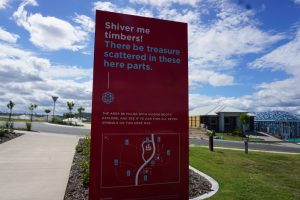 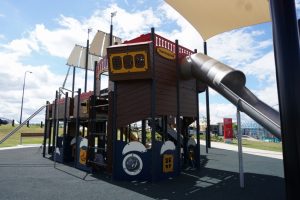 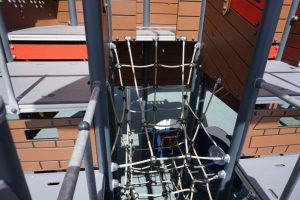 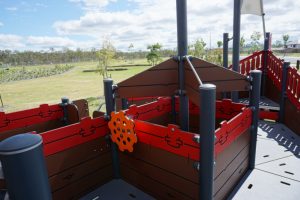 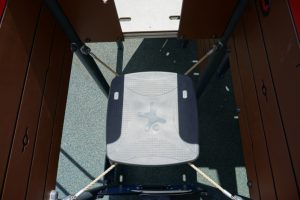 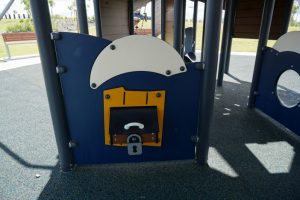 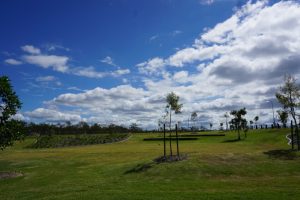 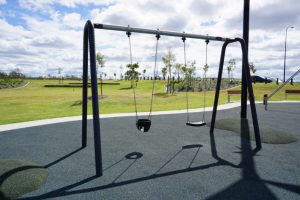 Flagstone Pirate Ship Park is located on the corner of Wentworth and Sheridan Drive.

While in the area, check out one of Brisbane’s biggest and most exciting playgrounds, Flagstone Adventure Park on Trailblazer Drive, Jimboomba.