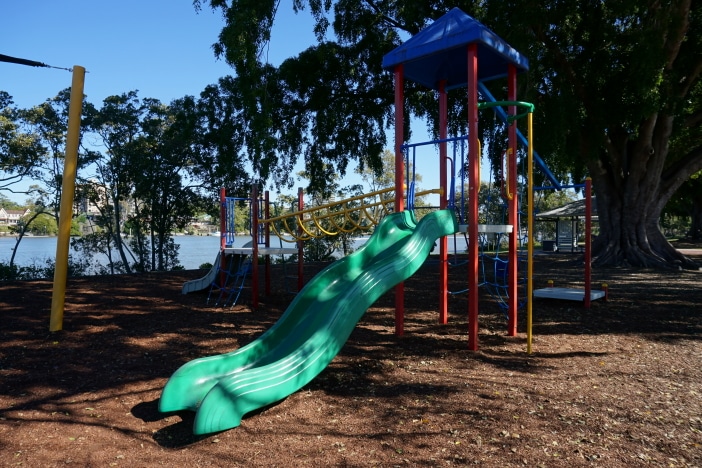 Another fantastic inner-city playground, Orleigh Street Playground at West End is a great little park for confident climbers! Right next to the West End Ferry Terminal, bring your Go Card and go for a ride or make the most of the riverfront location and pack a picnic.

Orleigh Street Playground (see also Hill End Terrace Playground) in Orleigh Park is a small but feature-packed playground housing two forts.  It might not seem like much when you arrive but it boasts various climbing, balancing and strength challenging equipment as well as the favourite swings and seesaws.

The first fort has cargo netting, medium-sized slide, fireman’s pole and then a horizontal ladder connecting to a shorter platform with a small slide, ladder and cargo netting. The second fort has a climbing wall, slide and fireman’s pole. There are also slides, a see-saw, rockers and both toddler and normal swings.

Surrounded by mature trees and a generously sized lawn area, there is space for ball games and chasing games running in and out amongst the trees. Or simply have a picnic under one of the magnificent trees. It’s probably not the best place to fly a kite. You could extend on your outing by taking a ride on a CityCat since the terminal is right next door. The timetable for Citycats can be found on the Translink website www.translink.com.au.

Don’t forget the bikes or walking shoes because there is a pathway along the river that goes for some kilometres.! This park has lots of climbing frames and balance challenges – so games, where the aim is avoiding the ground, would be well suited. Or maybe your kids are obstacle course crazy? The equipment is laid out in a rough circle, and would lend itself to an obstacle-a-thon or ninja warrior type game! There is no specific special needs equipment at this park, however, a wheelchair would fit at the picnic table. There are no toilet facilities in this playground, however, toilets are located at West End ferry terminal or near Hill End Terrace playground which is only 700 metres away. Street parking is available with time restrictions. Shrubbery and long grass act as a buffer along the river, there is no fencing.