Seagulls Club in Tweed Heads have recently launched a new initiative to provide greater independence for people with disabilities when visiting their Club.

They have put together a visual menu in their Mangrove restaurant, which means children and adults with a disability or developmental delay, can order from a modified menu which includes simpler descriptions and photographs of the meals, allowing them to choose the dishes that appeal to them, rather than what their carer believes they might like.

They have also ordered versions of their menu in braille for patrons who are blind or vision impaired and expect to take delivery of these this week.

Trilby Barrett, who has Down syndrome, now enjoys choosing her own meals when visiting the club.

“Trilby has limited communication skills, so before using this menu, we had to guess what she wanted to eat, and often this meant leaving full plates behind or only ever ordering hot chips” said her mother, Lorissa Barrett, who works in marketing at the club.

“Now she get an incredible sense of satisfaction and pride when choosing her own meals, it increases her ability to communicate effectively and gives her more independence in life”.

“You can really see the difference it has made in her enjoyment in eating out, I really hope other restaurants follow the lead”, she concluded. 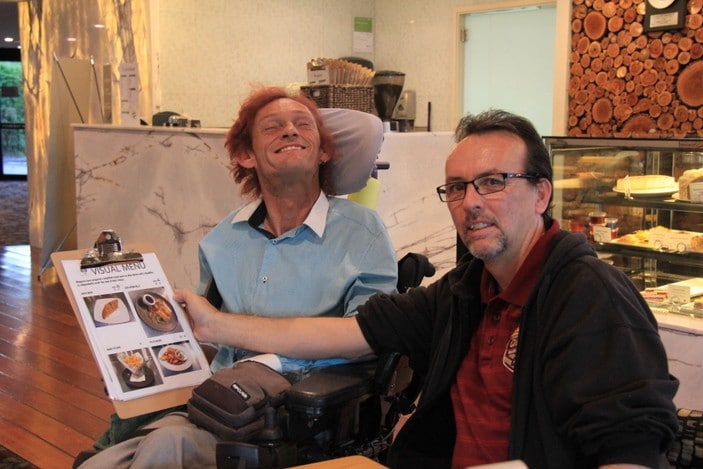 Another of the club’s guests, Paul Mauchline, appreciates the initiative. Paul lives in South Tweed Heads and visits the club every Thursday to dine with his carer, Matthew Dennes. Paul has cerebral palsy and the visual menu allows him to communicate his preferences more easily.

Matthew has said of the menu “The menu is fantastic Paul’s communication is visual rather than verbal, so it is much easier for anyone to know what he wants”.

“This is a great initiative for people now to be able to communicate their needs when they are verbally unable to and very inclusive of Seagulls to develop such a thing”.

As part of the Club’s commitment to community social responsibility, they initiated and developed the plan and encourage other restaurants to do the same.

In further positive news, Mangrove just received word that they have been confirmed as a finalist in the 2015 NSW Awards for Excellence.