Should I Ban ‘Gaming’ Screen Time During the Week

My 7 year old is a technology addict. He loves playing IPAD, computers, watching YouTube tutorials and, if left with no other option, my phone. Family life has become a constant negotiation about technology use, and it is a negotiation that rarely ends well. This is the story of how I banned technology (for the kids) in my house during the week, but more importantly why I did and what happened when I did.

Kids and Technology; why it’s okay.

1. When I did my teaching prac in a prep classroom, one thing stood out – there is no time to teach kids to use a computer. NONE! Oh sure, there is a token amount of time to show them the on switch, but generally it is expected that kids know how to use computers. If they don’t, they get the idea of it eventually, but they will be the one following instructions, not the ones moving ahead and extending their ideas. It makes sense that, to teach kids anything about computers of real value, really requires them to understand how to use one. Coding is now compulsory in schooling but it is not all-encompassing and so I think if you have a child who is enthusiastic about technology, you have an opportunity to extend that not unlike you might with dancing or art.

2. The IPAD was originally bought because it seemed like a good idea at the time (yeah, we didn’t think that much about it). It allowed my husband and I to have dinner out and, after wrangling the kids through eating and general chitchat, we would absolutely offer an IPAD as an alternative to chaos. It meant we could actually spend time together, outside the home. Could we control our kids? For long periods of time in a strange and busy environment? Make them sit still for 1 whole hour with colouring in pencils, without pencils turning into missiles? No. No, we can’t. Sure, we find places we can go, like pubs that have playgrounds, but when we want to go somewhere for a nice eggs benedict on mothers day morning, you can bet your nelly the IPAD will come with me. And I am at peace with it.

3. Our kids are entering a future where there is a new language, and it is called coding. They need to know to code. They need to be fluid with computers and technology to the level where they can look at a circuit board an innately know what it is, what to do and what goes where. a 2015 policy paper on coding released by the Queensland Education Department admitted they are teaching children for jobs that don’t exist yet but what they do know is that coding will be part of it. The latest Our children are the first generation that don’t understand life without the internet. If we sat them down, I would suggest that they would know more about what the jobs of tomorrow would look like than me. Traditional university pathways I am sure will still exist in some form, but realistically I have come to accept that I am giving my children an advantage by ensuring they have regular access to technology, are taught how to use it properly and left to problem solve using these learned skills.

The challenge with kids and technology

The problem with technology is that kids, being kids, tend to go for quick wins in terms of satisfaction. This means they are drawn towards games and, even lazier in terms of effort for reward, tutorials that show you how to do things. Even if you account for the physical activity on the Wii, it is all still about quick wins – surface stuff. The surface stuff with technology is what I see as causing the biggest issues with kids and gaming addiction, as well as STEM education in classrooms. While kids are operating on the surface, they just aren’t able to see or access the potential of that IPAD in front of them. If they are simply following instructions on Scratch in the classroom, they will never feel empowered or inspired to make their own game or translate those skills into real-world problem-solving.

Queue 3pm. Child runs out of the classroom, barely waves hi, then rushed off to play soccer with his friends. The minute, no second, I say “Let’s go!”, it starts.

“Not right now, we have to do blah blah blah.”

“CAN I PLAY IPAD AFTER THAT?”

“I don’t think so, you have homework and you need an early night.”

…It goes on and on, and you get the picture. This is all the time, every day. Sometimes I will give in. Sometimes I want to give in because it suits the circumstance. Sometimes it might be a negotiation between being allowed to play an educational game like Prodigy verse a Game like Fornite. Sometimes another child is at swimming lessons and he has to watch or because I have a really important phone call to make, I want to ensure silence. The problem with this method number one is that if you give technology to one child because of circumstance then you get into the tit for tat type discussion which, again, never ends well.

Each time I say no, he gets upset. And he gets upset if he sees his brother even glance at my computer or notice a meme on my phone (because this rule applies to everyone in the house who is in school). He gets so upset his little body seethes with frustration and sadness in being unable to explain or control this feeling.

It’s not all bad

When he is first on the computer, he begins with ideas and strategies. He and his brother might join worlds or build some huge castle together. ALL GOOD. As time passes, the robot sets in. He becomes less responsive (literally- I have to yell to break through). The longer he is on the technology, I realise, the more I lose him to a very reclusive world. The technology I am referring to is all the surface stuff. Games, game tutorials, videos and more videos. When TV becomes a respite, you know that something has to change.

At one point, I got so upset with how he was acting after one particular day that I banned all technology altogether. Unfortunately, this just won’t work, and really it was like I was saying “You are grounded until you are 50.”. Even if I said, you can go back on it when you realise how to behave etc etc, he is 7. He doesn’t really know how to behave, and that is why we are here in the first place. Banning for an amount of time that they themselves have control over is not the way to go (not for little kids anyway), though this might change when they are teens? I’m not sure yet.

It was hard to give this a name because there is more to it than banning tech during the week.

Obviously, there is homework that needs the internet, and I understand that sometimes something might happen that requires some photography or whatever. To save you time, let me bullet point what we do now and how it works for us and you can extract the most valuable points for your situation – 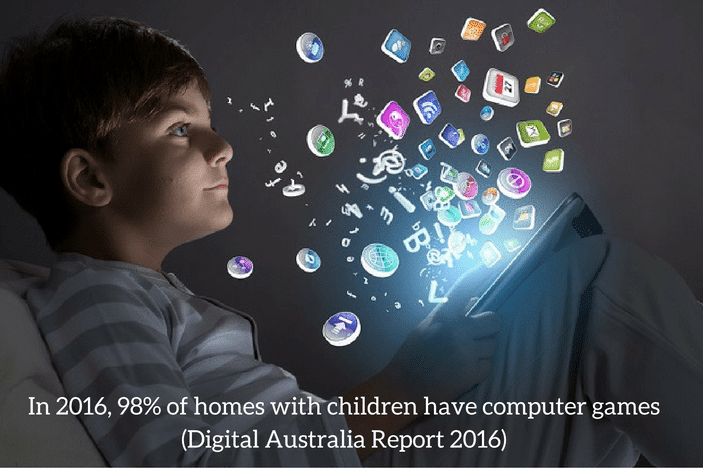 I am not an overly consistent parent, however, I do try to stick to this idea of no gaming or surface tech during the week. The few times I have let up on this ban I have very quickly been reminded why the “past me” is obviously not as clever as the “present me” but the “future me” will thank all of us. In other words- you need to be consistent.

We no longer get questions AT ALL during the week about the IPAD. Imagine that! 5 full days a week when the computer and IPAD aren’t mentioned and don’t result in tears.

The kids actually are ok. For the first few days they cry they are so bored, and then their little brains accept it isn’t going to change and they are inspired to find other fun. And they DO. Even if they whine occasionally. Our family has spent many a night around the kitchen table playing snap, or the kids will get out pens and draw or make cards for Christmas, or they will get out their dress-up gear or harass our pet dogs. The point is, they become happy, bickering kids again and I like it!

What works for us may not work for you, but I have trialled this method because our family needed something to change. I am a firm believer that if you don’t change anything then nothing will change. So, give it a go, let us know, you can always go back.

Free coding classes with https://coderdojobrisbane.com.au/ at various locations across Brisbane

Stem Punks with a variety of class opportunities from robotics, game design, drones and 3d printing as well as beginner and advanced coding.

Code Camps kids learn to make their very own app and play games and puzzles that use logic and coding.

Flying Fox Studios at Everton Park offer Fox Blocks which is a unique class featuring engineering and construction. Combining STEM concepts in a fun and creative way, our program uses construction and engineering resources such as Lego, Duplo, K’nex, Quadrilla, LittleBits, Fischertechnik, IQ Key, Snap Circuits, Plus Plus, Goldieblox and Magformers, as well as a wide variety of everyday materials. They also offer holiday classes which incorporate many of the themes that fall under the STEAM banner. Science, tech, engineering, art and maths.

The signs of gaming addiction and how to manage as a parent as well as knowing when to be concerned about their gaming use.