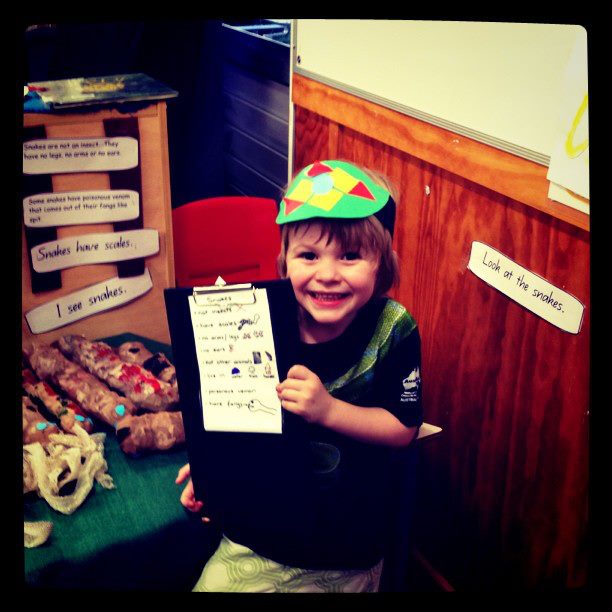 There are milestones that matter and those that don’t as much. Ones that parents speak of proudly, but the reality is that good genes and often good luck is the only reason for their early existence- still they matter, but not as much.

When you have your first baby, every little thing is a milestone and you wish for the next like a beautiful gift you can’t wait to receive, then regret upon receiving. By the 3rd child you hope milestones happen at nothing more than ‘normally’, because you realise that this precious gift of baby, or toddler or child will never happen for you as a mum again. All milestones matter, but the ones where your Brisbane Kid has made an effort and triumphed are the greatest milestones of all.

I have had 2 this week, 2 moments that will stay with me forever.

1) Last week my 5 year old Jack’s prep class had an evening presentation- an open night of their Bug Museum. Every child was given the role of a different bug or insect or scary thing- Jack got snakes. They were to tell us all about their creature, and tell he did. He told us of the different parts of the snake, what it ate, what it did. He told this to strangers, to mums and dads, to brothers and sisters. In the last 20 minutes the teacher rescued him just as sweat threatened to overwhelm his little self. She gently rescued him to the drawing table where he proceeded to self regulate himself back to calm. The fact that he would even talk to anyone, much less tell them about snakes was truly remarkable to me.

2) Today my perfect boy Jack, got his first certificate. And no that’s not the milestone.

Jack has ASD- despite this in many areas he is infact smarter than the average bear, but speaking in front of people “does not a friend with ASD make”. ..and it means he has some sensory disregulation and other small amazing different things that make him uniquely perfect just like any other child.  Jack got up in front of his junior school and received his certificate in front of lots and lots of people. I could almost feel his body tremble despite being 50 metres away.  His teacher, bless her, walked up with him and I saw him close his eyes as he reached out, his head down, willing it to be over.  I gasped at his bravery at his moment. He did it. I realised this was such a momentus occasion and that I didnt have my camera, but even if I did it would have captured none of the miracle. For Jack had just given me, his mum, a miracle. When the assembly was over I made sure I found him and hugged him and told him of my pride of how proud he should be. He told he didnt want to do it and he burst into tears. BUT I know deep down, when he calms down he will be proud as punch too, though he may not allow himself to admit it. I had to leave him to his tears with his teacher, realising this is the first step towards letting my beautiful boy go into the world without me..  Me walking away was my milestone

As parents, we often get wound up in milestones of comparison. Today I was reminded that the milestones that matter most are those that cant be measured by a chart, compared with anyone or be given an estimate time where they should be happening..well done Jack xx What milestones have your Brisbane Kids had lately?