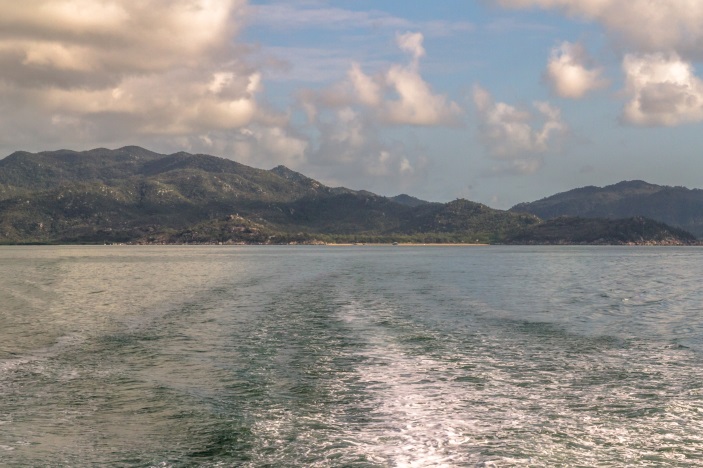 Magnetic Island was named by Captain Cook, whose compass played up when he sailed past in 1770. He surmised that the island was acting like a magnet on his compass, but no one since has been able to replicate the effect. For tourists, the island certainly feels as though it is exerting a magnetic influence on you, drawing you to a relaxed, tropical holiday that makes Magnetic Island for families a must-do.

‘Maggie’, as the locals call the island, is home to the much sought-after gentle waves lapping on palm-lined beaches, but it also features jumbles of granite boulders and hoop pines. The majority of the island is national park, with several small settlements squeezed between the rocky, vegetated hills and the beaches. The ferry ride from Townsville is only 20 minutes, but a visit to Magnetic Island will make you feel as though you’re miles from anywhere.

The laidback vibe and lack of much major development is one of the major attractions of Magnetic Island; the main thing to do is just relax on one of the many bays, though there are certainly other activities if you wish to be a bit more energetic. Because the island is within the protection of the Great Barrier Reef, the waves tend to be small and thus suitable for young children who may not appreciate the bigger waves you find close to Brisbane. Below is a rundown of each of the main settlements on the island, plus the less accessible bays. 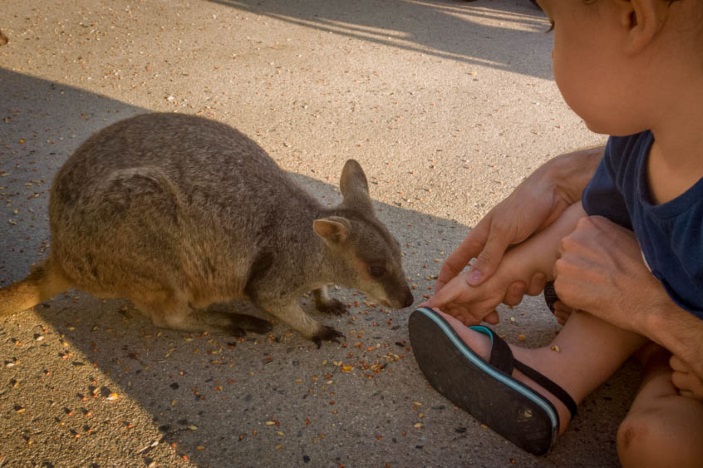 Unless you have your own boat, you will definitely visit Nelly Bay as part of your trip to Magnetic Island, as its marina is where both the passenger ferry and the vehicle barge pull in. The beach at Nelly isn’t patrolled, but it’s home to fringing reef, and a park with playground, BBQ and toilets. Nelly Bay has a range of shops both at the marina and elsewhere throughout the settlement. All ferries are met by buses.

The island’s first settlement was at Picnic Bay and passenger ferries docked here from when the first ferry began running more than 100 years ago until the Nelly Bay marina opened in 2003. The legacy of this long service is Picnic Bay’s jetty, a lovely spot to cast a line or admire the view back to Townsville. The beach is patrolled and there’s a playground nearby as well as a small mall with restaurants and shops overlooking the beach. 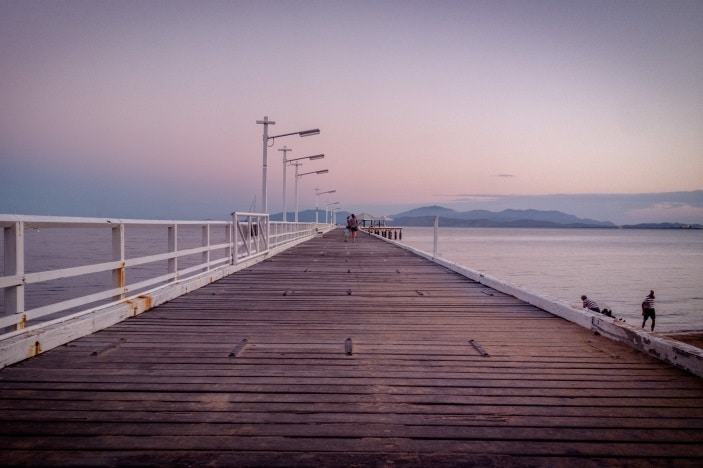 Arcadia is the settlement encompassing both Geoffrey and Alma Bays. Geoffrey is a long, sweeping bay with fringing reef which you can snorkel or even walk to when the tide is low. The wreck of the SS Moltke is found at the northern end of the bay and is suitable for divers of all levels. One of the best activities for Brisbane kids on the island is found at Geoffrey Bay: feeding the rock wallabies. Pick up a bag of feed from one of the shops or bring your own carrots or apples and offer them to the cute little marsupials who come out on the road leading to the old barge dock when the sun is setting. The wallabies are very tame and will happily stand nibbling their food while your Brisbane kid poses for photos. If you’re looking for animal encounters of a different sort, the Arcadia Village Hotel runs cane toad races every week.

Alma Bay is just around the corner and is the place to swim in Arcadia. It’s a pretty little semicircle of a bay bounded by jumbles of rocks which will be a favourite for anyone in the family who loves climbing. Between the bay and the road is a lovely shaded area with a playground, toilets and picnic tables. The patrolled beach is one of the favourite swimming spots on the island. 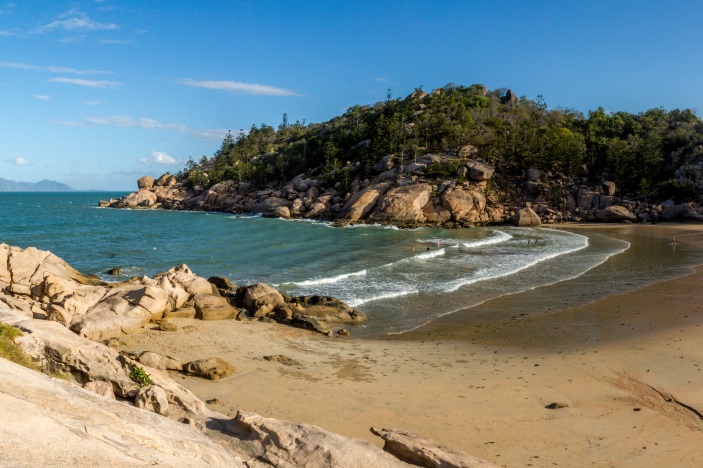 This is the island’s largest bay, a north-facing, horseshoe-shaped bay where boats bob at anchor. If you want to join them on the water, Horseshoe is the place to hire watercraft, from stand-up paddleboards to kayaks to jet skis and more. You can swim here as well at the patrolled beach, or sit back at one of the cafes or bars that overlook the beach. There’s picnic tables, toilets and a playground, though it isn’t shaded so is best avoided during the heat of the day. Appropriately enough, Horseshoe Bay offers horse riding, allowing your family to ride through the bush, onto the beach and even into the ocean. There’s also pony rides available for younger children. Bungalow Bay Koala Village, owned by the same family as Townsville’s Billabong Sanctuary (link to Billabong Sanctuary section of Townsville story), offers two-hour tours on which you can hold a koala, see other native animals and go for a bushwalk. If your child doesn’t have the patience for a two-hour tour, there’s plenty of other ways to see wildlife on the island. There are birds in abundance: cockatoos, kookaburras, curlews with their haunting cry, and you may even find yourself sharing your breakfast with a cheeky lorikeet or two! For a true northern Australia experience, take a walk along Horseshoe Bay Road and challenge your kids to spot green ant nests. The ants construct these nests by gluing together leaves, and a few quick taps will determine whether the nest is still inhabited! If you’re very lucky, you may even spot a koala in the wild, the most likely place being on the Forts Walk, one of the many walking tracks threading throughout the island. The Forts Walk begins on Horseshoe Bay Road and is a moderate walk of 2km each way to World War II forts. 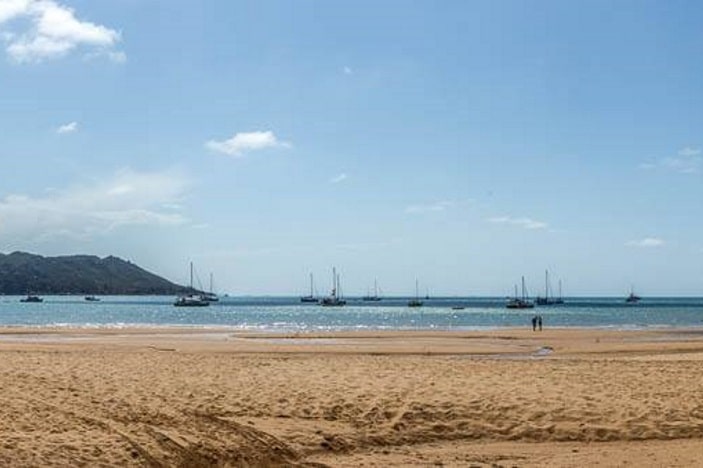 Other bays to visit around Magnetic Island

Cockle Bay – located west of Picnic Bay and reached via an unsealed road. You can view the wreck of the SS City of Adelaide and there are coral reefs and mangroves – prepare to get muddy!

West Point – as the name suggests, this is the very western point of the island and a popular spot to watch the sun set over the water. It can only be accessed by 4WD or on foot.

Rocky Bay – a nudist beach between Picnic and Nelly Bays accessible only by foot or boat. There’s fringing reef on the northern end.

Arthur, Florence, Radical and Balding Bays – these bays lie between Alma Bay and Horseshoe Bay. They are beautiful and offer good snorkelling, but none are patrolled and they don’t have any facilities, so consider your family’s needs if you’re planning to visit them. Balding Bay can only be reached by walking track or boat and is a nudist beach. 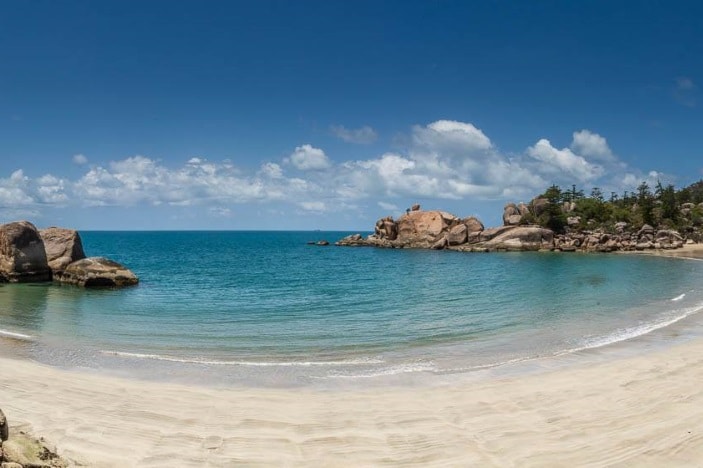 Getting to Magnetic Island for families

Magnetic Island is a suburb of Townsville, which can be reached via a 15-hour drive on the Bruce Highway from Brisbane, or a two-hour plane ride. The trip from Townsville to Magnetic Island is part of the fun of your holiday. You can take either the vehicle barge or the passenger ferry. Both pass by Townsville’s port as they head to the island, so your Brisbane kid may get the opportunity to watch large cargo ships loading and unloading. The ferry and barge arrive at Nelly Bay. You can hire a car in Townsville or on the island, or take advantage of the island’s bus service. There are also taxis available on the island.

To find out more about Magnetic Island for families, check out the Tourism Australia and Tourism Queensland websites.