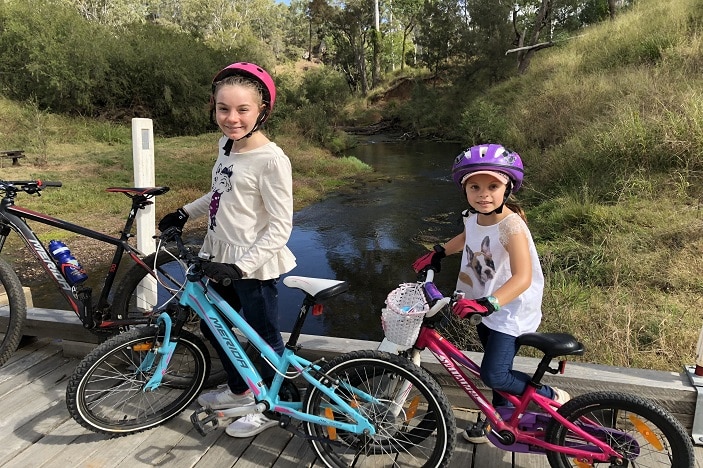 Rail Trails are shared recreation trails, created from abandoned railway lines that once meandered their way through country towns.

There are trails to suit cyclists of every age and fitness level. We have collated the best family-friendly rail trails near Brisbane so you can get on your bike and go! 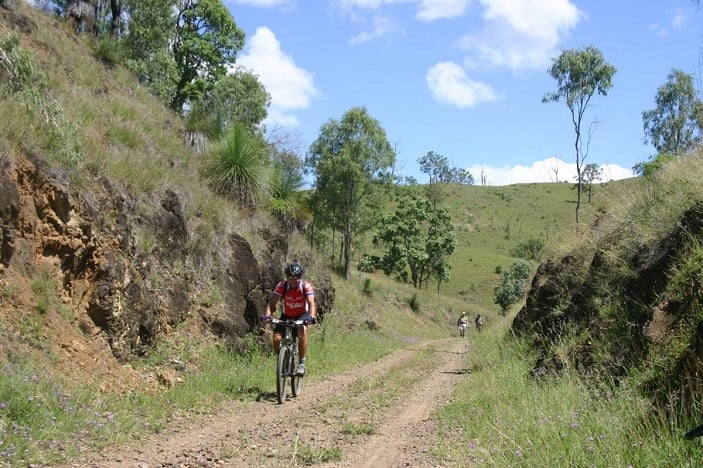 The Brisbane Valley Rail Trail is Queensland’s longest rail trail and will be 160km when complete. Traversing through farmland and bushland, the trail follows the old rail corridor from Wulkuraka, west of Ipswich, to Yarraman, west of Kilcoy.

Families can choose which sections of the rail trail they would like to complete as there are multiple access points along the way, usually at now defunct railway stations.

The standard of the trail surface varies between sections, and some areas are more challenging than others. Toilets and other facilities are available on some sections of the trail, but it’s worth checking out the Rail Trail Australia website before you go, for up to date information and maps.

If you need assistance with bike hire, drop off, pick up or bike tours along the Brisbane Valley Rail Trail, contact Out There Cycling.

The rail trail starts at the right-hand side of the railway station (plenty of parking available).

This section of the track has a compacted gravel trail surface and is very achievable for families.

A pleasant ride through bushland and farmland, including a creek crossing. The surface is coarse gravel and dirt.

This section of the track passes through several farms, so it’s important to remember to shut any gates that you open along the trail. Again, it is a coarse gravel and dirt track.

This length of track is currently under construction, and cannot be used.

There are some steep hills in the section of the track, so it’s suitable for older kids and teens only.

This is also quite a challenging section of the track, with hills and a coarse gravel surface. 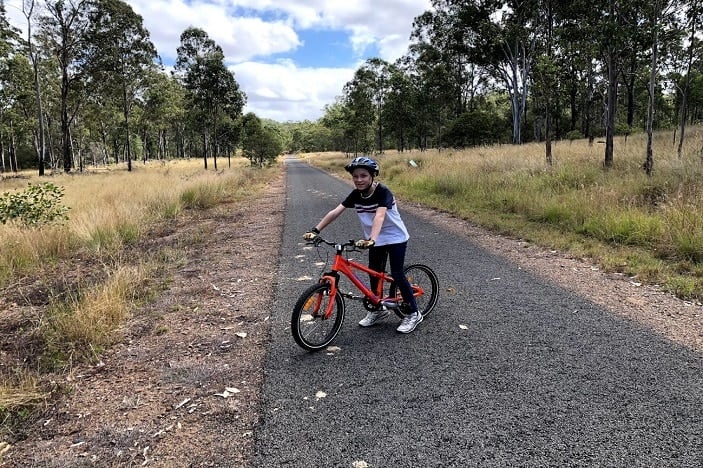 The Kilkivan to Kingaroy Rail Trail is 88km in length and runs through farmland and bush land, with several quaint country towns along the way. It’s best tackled in sections, as little legs can get tired quickly!

The Kilkivan to Murgon length has a gravel and dirt surface that is rough in areas. There is also a watercourse that needs to be crossed with care. This section is best attempted by more experienced riders.

Begin at the former Murgon train station, which has ample car parking. The surface is sealed and fairly flat, making it perfect for family cycling.

This is another great section for families to attempt, as it is mostly flat and the track is sealed. There’s plenty of bird life to enjoy, and if you’re lucky, you may even spot a kangaroo or a koala!

This is another sealed section of pathway. Begin at the Grand Hotel at Wooroolin and cycle through to the major regional centre of Kingaroy. Here you will find plenty of facilities including accommodation and food, toilets and water, and a visitor information centre. For more information about family friendly activities in the Kingaroy area, read our review of the South Burnett.

If you need assistance with bike hire, drop off, pick up or bike tours along the South Burnett section of the Kilkivan to Kingaroy Rail Trail, contact Out There Cycling. 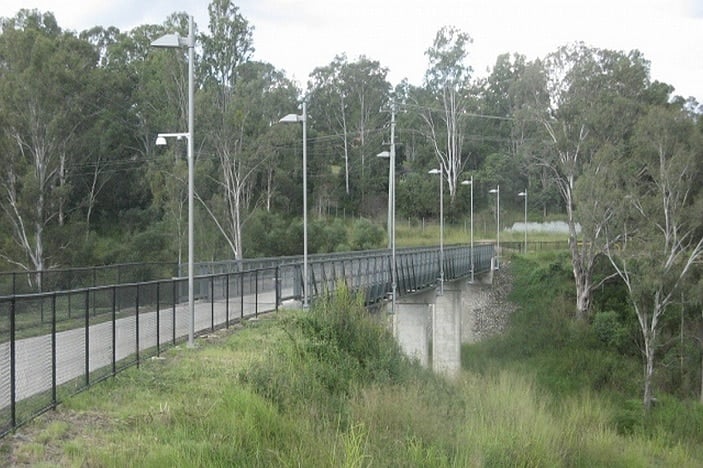 The very popular Brassall Bikeway links North Ipswich, Brassall, Wulkuraka and the Brisbane Valley Rail Trail – which continues onto Fernvale and stretches all the way to Yarraman.

The 14km concrete bike path highlights the region’s history and follows the first railway line built in Queensland. It’s fully paved and easy to navigate. The trail starts at Vogel Road and heads north east before concluding at the Workshops Rail Museum.

There is also a 600 metre mountain bike track you can access from the bikeway if you’re feeling adventurous. The track has a bike repair station and a shaded seat for spectators. The trail is perfect for all ages although training wheels are not recommended.

Discover the old steam engine, railway siding and other surprises along the way as you wind your way along the bike path. Visit the heritage listed The Workshops Rail Museum, or take the kids out to the bicycle learning track at Sutton Park. 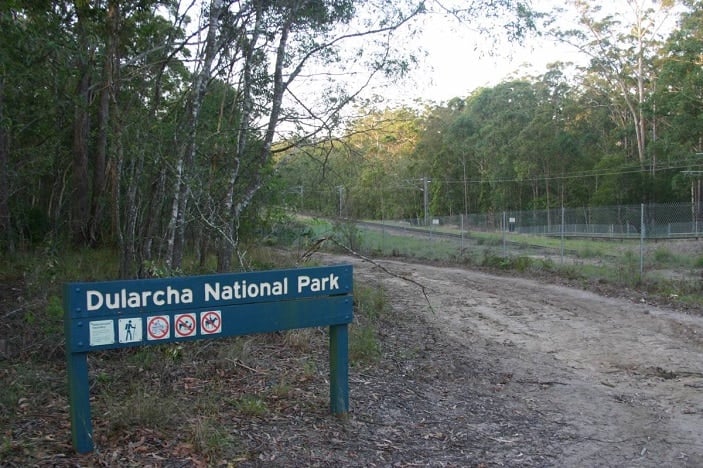 This short rail trail follows the main Brisbane-Cairns railway line between Landsborough and Mooloolah within the Dularcha National Park.

At the northern end, access by car is via King Rd and Dorson St because an old timber bridge on Paget St has been closed to vehicles. Pedestrians and cyclists can take the more direct route via Jones St then Paget St.

Take this easy ride to the heritage-listed railway tunnel. Slow down as you enter the tunnel to allow your eyes time to adjust to the darkness—especially important for cyclists! If you stop to look around, you may see colourful moths, spiders and bats.

This shared trail passes through forest and offers views of the Glass House Mountains. This is best suited to families with teens that are confident on mountain bikes. 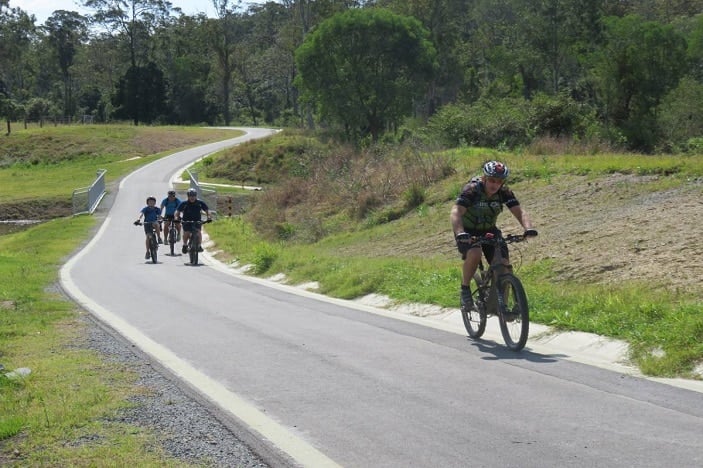 Accessible from Ferny Grove Railway Station, this is the closest rail trail to Brisbane.  The former railway is clearly evident in the Conservation Park, rejoining quiet local roads for the section into Samford. Thank you to Rail Trails Australia for the following information about the trail:

At the end of Lanita Road is a vehicle turning circle. A path leads up to the start of the trail which runs through the southern part of Brisbane Forest Park. The rail trail can be distinguished from other forest trails being sealed  and by substantial railway embankments and cuttings. The trail ends at a gate at the western edge of the park.

The busier McLean Road then picks up the railway alignment. Along this road is the site of Queensland’s worst railway accident. On Labour Day, 5 May 1947, a picnic train descending the steep grade of the Samford Range left the rails resulting in the death of 16 people including the driver and fireman.

The railway can be picked up again where it passes through Samford Village. A short section of the formation remains as a walking trail connecting the northern and southern sections of Cash Avenue. The Samford Museum complex houses the original Ferny Grove railway station and has information on the line.

A further 1km section of the line can be walked or ridden north from Currawong Road. It leads to the entrance to a railway tunnel under Mount Samson Road. The far end of the tunnel has been blocked and it is now used by Queensland University to study the resident bat colony. Steps lead up to the road above where there is a plaque marking the location of the tunnel. The section may be muddy after rain.  The tunnel is not able to be entered; the northern end was filled when the site was used as the local rubbish tip. 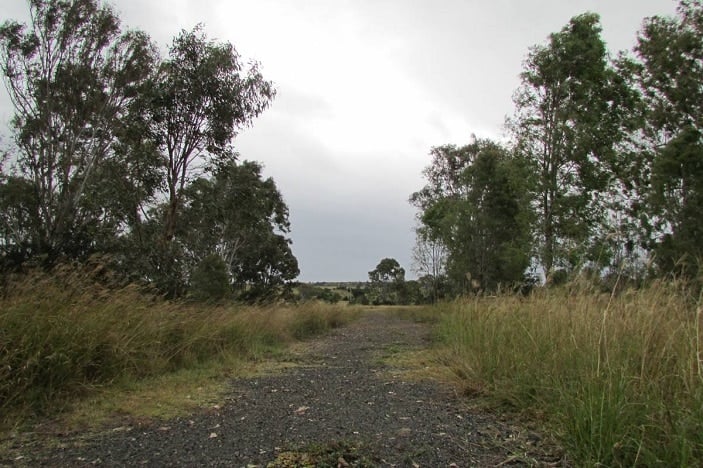 The Fassifern Rail Trail uses a section of the disused railway line on the outskirts of the Boonah township. Commencing at the car park of the Boonah Visitor Information Centre, the rail trail starts with a climb to a lookout over the Boonah township. The trail continues to the west via a simple walking track, over a mostly gravel surface. Alternatively, you can drive to the lookout and start from there, to avoid the steep climb. Located in the Scenic Rim tourist area, this is a very pretty ride through the countryside, and a good one for families of all ages.

For more locations for family bike rides in South East Queensland, check out this post.