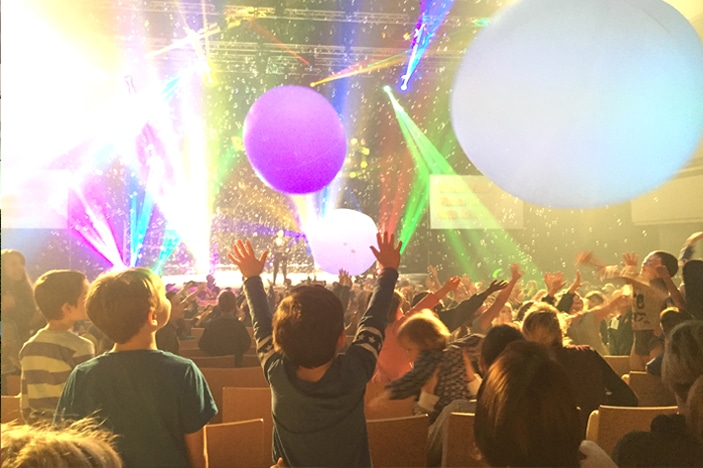 Gazillion Bubble Show at Out of the Box festival

The Gazillion Bubble Show is showing at Brisbane’s Out of the Box festival from 23rd to 27th June 2016.

How is it that the mere sight of a bubble, drifting gracefully through the air, can so easily and unconsciously draw a smile and bring forth a feeling of joy and wonder to the lucky recipient its presence was gifted to?  Maybe it’s the way its delicate outline catches the light and creates a small circular space of beauty within the air?  Or possibly it’s the knowledge that this beauty is so fleeting?  That as they move so lightly, floating wherever the wind’s hand guides them, and with such fragility, even the touch from the smallest of dust particle at any time can make them burst?

Whatever the reason, there is little doubt that bubbles do manage to capture our attention and imagination, regardless of our age, and its why the Gazillion Bubble Show – which has now drifted into Brisbane for the Out of the Box Festival – has enjoyed such worldwide success to date.

What does the show involve? 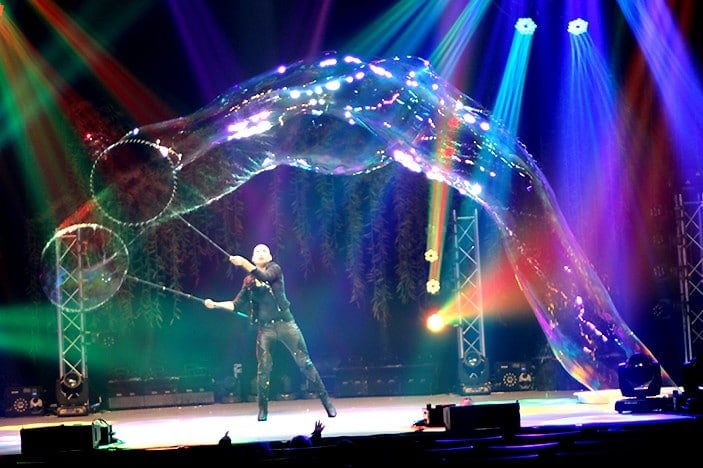 For over three decades the Yang family have explored the fascinating world of soap bubbles, experimenting with creations and performing for audiences around the world.  So dedicated to the art and science of these small miracles, the family currently hold a whopping 17 Guinness World Records – for things like the largest bubble ever made (170ft) or for the most amount of people to stand within a bubble (it’s 181 if you are wondering).

Bringing the Gazillion Bubble Show on its first ever Australian tour is the family’s daughter (and the show’s sole performer), Melody Yang.  A woman who is clearly not only at home on the stage, but obviously still possesses a childlike love and wonder of the bubble magic she creates.  Sticking to the formula of the stage show her family have now made famous internationally, Melody wows the crowd with an array of spectacular bubble work of all shapes and sizes, shares stories, imagery and videos of her family success story, involves spectators with her acts and rounds the show off with a heart-stopping, gasp-inducing light show. 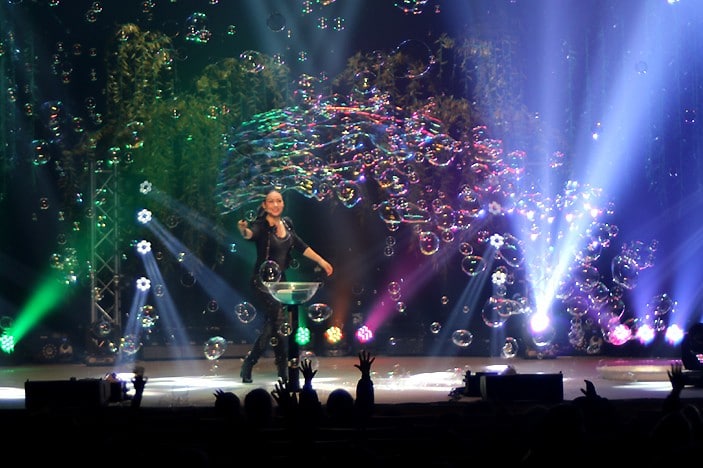 I went along to the Gazillion Bubble Show with three things.  Two very curious little girls (aged 4 and 6) and no real idea of what I was about to experience.  Of course, I was expecting to see a stage show that involved, well, a fair amount of bubbles but that was about as much as I knew.  Needless to say, I was in for a few surprises!

One thing I will give the Yang family is their ability to work with all mediums to heighten the senses and build audience anticipation and excitement to the max.  As soon as we were seated and the lights were dimmed, we were greeted with two screens either side of the stage that welcomed us, accompanied by a booming voice that enticed us with what we were about to see while a sea of dramatic music ebbed up slowly around us.  As the build up reached its crescendo the stage lit up and Melody swept across it, a large multi-bubble blower held high above her and a trail of bubbles flying wonderfully in her wake.  This was met with much ‘oohing’ and ‘ahhing’ and with it the first of many smatterings of applause.

Melody herself played to the crowd throughout the performance, stopping to introduce herself and her family’s history of bubble making along the way (with video and imagery aids on the screens as well).  Audience interaction was a big part of the show and by far one of its greatest successes too.  Quite a few times throughout the show she called on volunteers to come on stage and the sea of jiggling hands that immediately stretched skyward, bottoms hovering above their seats hoping for some advantage to be seen, was a clear testament to the children’s desire to be as close to the bubbles as possible (I should point out there were definitely adult hands raised up as well).  Selecting those that were not just in the front rows but actually walking out into the crowd to find a child near the back was appreciated and the gentle banter she had with them once they were on stage gave these parts of the show a warmth and humour. 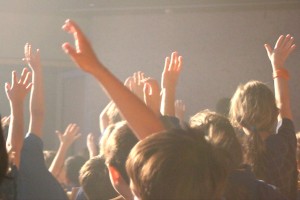 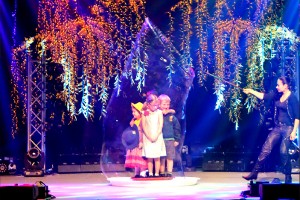 At first, the audience were entertained with smaller acts of bubble blowing fun, each one performed and timed to the background music and lighting effects.  But as the show continued the scale and grandeur of the bubble acts increased with smoke pipes and inbuilt light tables aiding to the tricks and before long the entire stage and audience were surrounded by a sky filled with bubbles.  Not just limited to the first few rows, the bubbles trajectory was far reaching and machines near the back ensured that even the little spectators furthest away could appreciate their delicate magic. 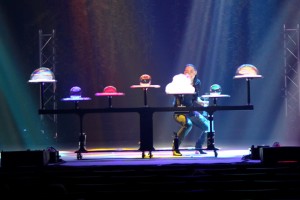 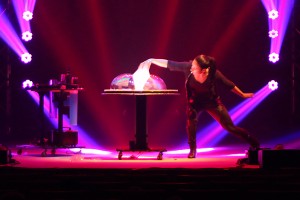 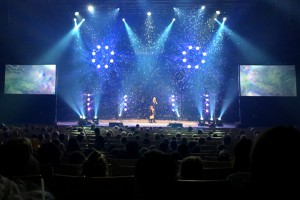 But it was the lighting show, completely unexpected and starting in the latter half of the show, that really kicked the excitement and exhilaration of the crowd to the next level.  Loud beats of music pulsed throughout the crowd as beams of light appeared to descend down onto the audience.  Melody herself took centre stage and in flashes of light appeared to be playing with and directing the light beams.  But it was when, amongst the flashes of light and beats of music, we could see the first sprinkling of bubbles heading out from the stage that the real excitement began.

It may not involve any great magic or skill but the effect was intoxicating and the kids in the crowd were up on their feet and screaming (egged on by the screens telling them to get ‘louder, louder’) as the bubbles filled the crowd.  Giant balloon ‘bubbles’ fell from the upper balconies into the crowd and it was within pulses of light you could see a sea of small hands reaching up to feel the bubbles, the balls and (I’m sure some thought) the light.  At this point the room felt momentarily like a little rave for kids (with bubbles) as kids stood up and danced, screaming with excitement as the lighting changed or the giant balls crowd surfed closer to them. 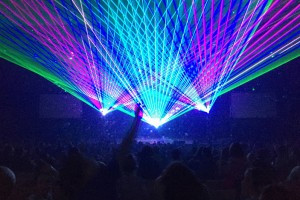 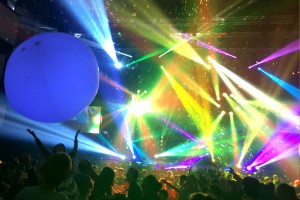 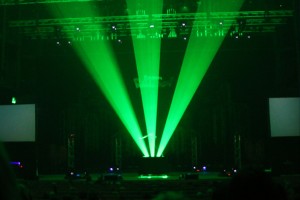 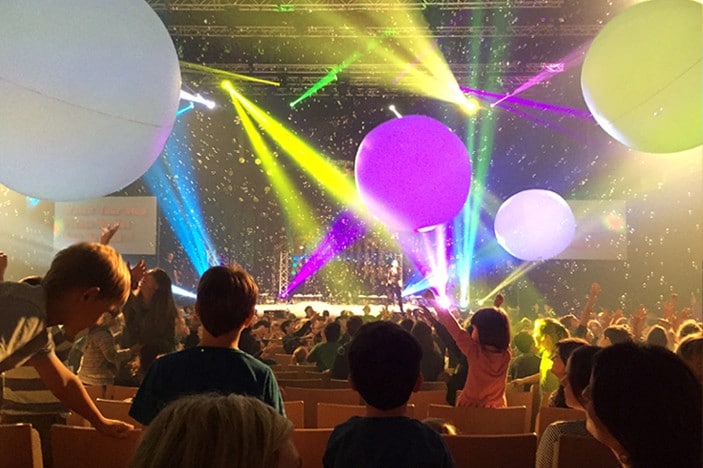 Overall, our experience of The Gazillion Bubble show was very positive.  If I am honest, I probably expected a little more from the actual bubble magic as I had seen similar tricks to what she was performing before.  Also, the sections where we watched the videos of the Yang family achieving their world records were interesting, and she was obviously very proud, but I think most people were just keen to get back to the real bubbles on stage.

Regardless of that, bubbles have a wonderous effect on people and it was no different to the children that surrounded me in that theatre.  They delighted every time a new bubble was formed and the effect of sitting in a room with bubbles floating everywhere as lights and sounds exploded nearby was worth it.  Even after the show ended children were reluctant to the leave the theatre and if the excitable chatter coming from the little people as they filed out is anything to go by then it was clearly very loved.

I may have come into the show having very little idea of what to expect but I left with a smile on my face and two very excited little girls.  And as Melody had said earlier in the show that her aim was simply “to make people happy” – I’d say she definitely achieved that.

The show runs for just over an hour with tickets ranging from $39-$49.  Although more expensive, getting a spot closer to the front will ensure a feeling of being more immersed in the bubbles when they are filtered out over the audience.  Hint: If you have a group of 6 or more people then you can get A Reserve seats for $30!

For your chance to experience The Gazillion Bubble show then you can view session times, buy tickets and get more information from the Out of the Box website.

Check out a video from The Gazillion Bubble Show here:

You can find out about all of the fun activities and entertainment on off at the 2016 Out of the Box festival in Brisbane here.