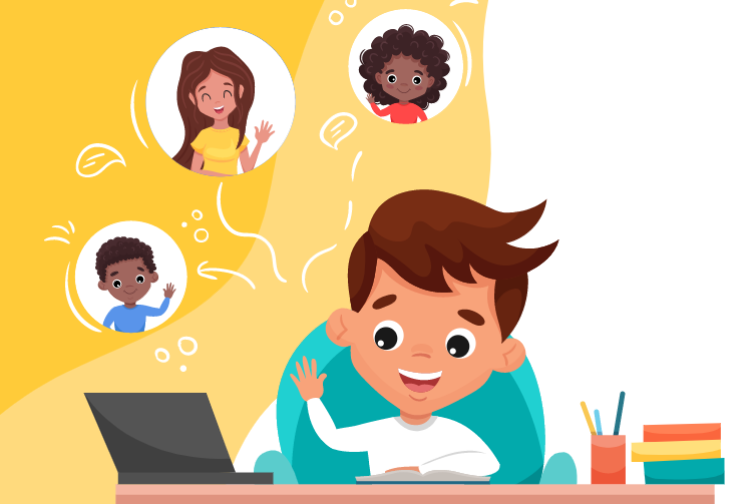 Let LinguaKidz help your child ‘Discover a World of Fun with Languages’ from the comfort of your own home! LinguaKidz understands that children’s extra-curricular lives can get busy and they are excited to bring the wonderful opportunity of language learning to you without having to drive around town! Choose from online classes in Japanese, French, Spanish, Italian or Portuguese during the school term.

LinguaKidz is passionate about inspiring children to become global citizens through sparking curiosity about and respect for the world around them. They offer fun-filled and communicative Japanese, Spanish, French, Italian and Portuguese classes, using an immersive and interactive approach! LinguaKidz’ thematic units are created specifically for the online platform to optimize student engagement and outcomes!

In the LinguaKidz online classroom, students are arranged into small groups such that they can maximise their connection with the teacher as well as have opportunities for interaction with each other. Why choose Italian classes for kids? Italian, which is part of the romance language family, has over 90 million total speakers around the world. Italian is also recognized as one of the easiest languages to learn for English speakers!

If your child happens to know or plans to learn Spanish, French or Portuguese, you’ll find a ton of similarities when they take LinguaKidz online Italian classes for kids. They share many of the same, if not similar, vocabulary, grammar and sentence structures.

Why choose French classes for kids? With over 200 million French-speakers globally, French is spoken as an official or dominant language in 60 countries across Europe, Africa, Asia, North America, South American, the Caribbean and the Pacific. French is also the second most widespread language in the world (after English, French is spoken in the most countries), making LinguaKidz online French classes for kids the ideal way to learn to communicate throughout the world!

Why choose Spanish classes for kids? Spanish is the second most spoken language in the world after Mandarin Chinese, with over 430 million native speakers. The United States alone has 45 million Spanish speakers, making it the second largest Spanish-speaking country in the world (and it is expected to become the largest by 2050!). LinguaKidz online Spanish classes for kids will teach them more about the culture and language of Spanish-speaking regions.

Why choose Portuguese classes for kids? What’s the fastest-growing European language after English? It’s Portuguese! According to UNESCO, Portuguese has high growth potential as an international communication language in Southern Africa and South America. It also shares 89% lexical similarity with Spanish, making each one compliment the other for faster language learning – with LinguaKidz online Portuguese classes for kids, your child could be trilingual in no time!

Why choose Japanese classes for kids? Japanese is the ninth most spoken language in the world, with 128 million people speaking it as their first language in two countries – Japan and the Republic of Palau. The Japanese writing system has similarities with the Chinese writing system, therefore, LinguaKidz online Japanese classes for kids can also help your child to learn and understand other Asian languages, especially Chinese, Korean, Thai or Vietnamese! What language levels does LinguaKidz cater for?

Classes are tailored for all language background levels and students are grouped accordingly. Children of all ages are welcome to join LinguaKidz’ beginner or intermediate level group classes, or other levels or language needs can be met through their private classes.

If your child is keen to discover the joy of learning a different language for the first time, or has had minimal exposure to the language, LinguaKidz’ beginner groups are designed to ease students into an immersive and interactive learning environment.

This level is designed for students who already have some conversational skills in their chosen language. They are encouraged to engage in a full-immersion environment, while acquiring new vocabulary, developing a greater understanding of grammatical concepts and ultimately increasing their language fluency.

What do the studies say about how learning languages can help your child’s cognitive development?

Multiple studies suggest that language learning improves the brain’s executive function. This, in return, helps your child to better ignore distractions and stay focused and retain information. Learning another language is considered by many researchers and academics as one of the most effective and practical ways to increase intelligence, keep your mind sharp, and buffer your brain against aging! How does LinguaKidz help to make learning a new language a fun and engaging for your child?

LinguaKidz recognises the many wonderful benefits that their Spanish, French, Italian, Japanese and Portuguese language programs and school holiday camps provide, immersing children in rich language environments that get the brain ‘working out’ all while having fun and expanding their perspectives of language and culture!

To suit the language learning goals of each child, LinguaKidz have three packages to choose from, including small group or private tuition:

Packages are for an 8-week term during the school term, with classes held on Tuesdays, Wednesdays or Thursdays between 4.30pm and 7pm.

‘The LinguaKidz online Spanish lessons have been a welcome addition to our after school activities. Convenient, useful and fun… Massimo really enjoys learning through the videos and then practicing with the teacher and other students. His vocabulary and understanding of the language has definitely increased through the weekly lessons. Muchas gracias LinguaKidz!‘