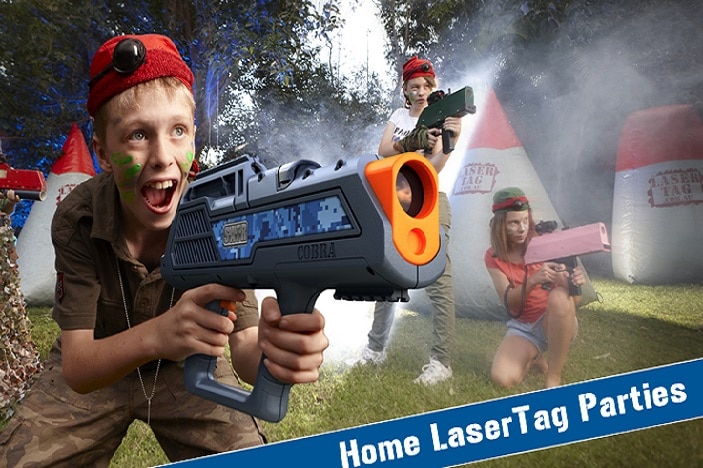 Are you over jumping castles? Can’t face another bowling birthday? Worried about risk at a trampoline party? Lasertag is becoming a popular choice for Brisbane parents looking to have a fun kids party at home for children.

Create a party they’ll never forget. Throw a Laser Tag Party in your backyard! This is full-throttle fun that is set up in minutes. Call them to book: by phoning 1800 266 587.

Home Laser Tag Parties are a great idea for some kids’ party games to add some spark to your boy or girl’s birthday party.

Let’s face it, kids love games as part of their party.

The team at Laser Tag in a Box have been making kids happy for more than 15 years.

Kids Party Games for Ages 6 to 8

If you child is turning 6 or 7 or 8 then they’ll love some army party games at their birthday party.

We recommend a “Party-in-a-Box” where 10 can play at once. Basically it is the red team versus the blue team. Red tag the Blues.

Everyone gets 5 hit points. When they’ve been tagged 5 times they run back to base camp and press the button on the medic box. The computer brings them back to life and they run back into the game for a bit of “pay-back”.

Kids LaserTag Party Games for Ages 9 and up

With a game box you can play the game “Capture & Hold”. This is our favourite kids’ party game.

Here they recommend an “Awesome-Party-in-a-Box” + a “Game Box”. In this pack 10 can play at once. (Actually you can rent more phasers if you like in increments of 5, so you can have kids’ party games for 15 or 20 or more!)

Anyway the way to really entertain the kids aged 9 and up is to just add the Game Box. In this game you place the game box in the middle of wherever you are playing, say the middle of your backyard. Players still get 5 hit points. As well as tagging each other they also need to tag the Game Box.

This encourages teamwork and tactics. The computer inside the Game Box times how long each team is in control of the Game Box. At the end of the game (usually 10 minutes but you can decide how long you’d like each round) and say the blue team had it in control for 7 minutes then the computer pauses everyone automatically and the box itself will flash blue. And the box also has a cool sound effect with announces “blue team is victorious!”

Laser Tag Rentals – All of their packages include:

Hire for Saturday – Get Sunday FREE – awesome value! Laser tag equipment comes fully charged and ready for play. Play time lasts up to 16 hours. But if that is just not enough we’ve also included a battery charger in your box. 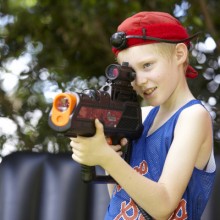 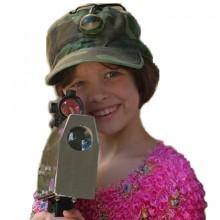 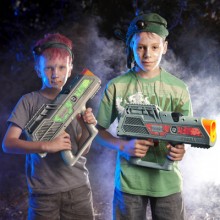