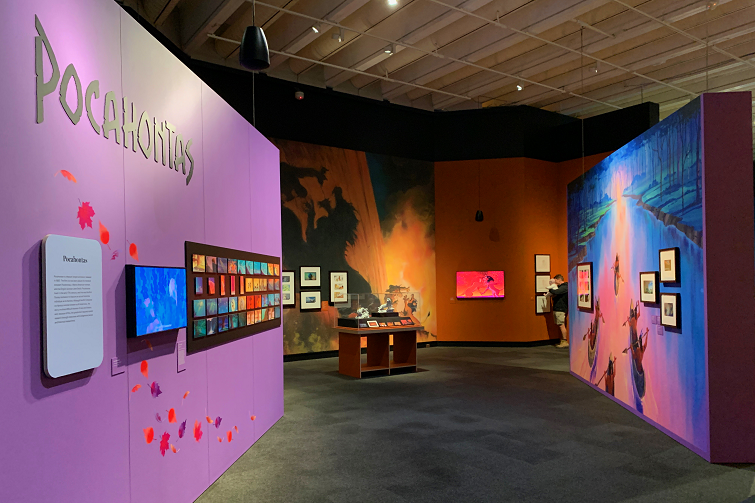 Walt Disney. It is a name that is synonymous with world-class animation and much-loved children’s classics. One that, for almost a century now, has captivated generations of families with his uniquely beloved cartoon characters, memorable stories and brilliant designs and animation. And now, the drawings, artwork, sketches and behind-the-scenes works of nearly 30 Disney favourites has arrived in Brisbane, as Queensland Museum launches their Disney: The Magic of Animation exhibition. We had one of our writers and her children on hand to check it out. Below is their review.

Disney: The Magic of Animation Exhibition Selected from over 65 million original drawings and nearly 40 million digital artworks, Disney: The Magic of Animation exhibition is both immense and stunning. Generously spaced out over the entire third floor of the museum, the exhibition is displayed in five main sections, each one focussing on a different era of production from the world’s most prolific animation studio.

Upon arrival, visitors are encouraged to grab a small folding stool and sketch board from the sketching station, to use at their own will as they move through the exhibition. A large screen displaying a combined montage of Disney sketches and animation fills the room as you head into the main exhibition area.

Once in the main area, each animated classic, and there are close to 30 that have been featured, has been allocated their own large display area, with floor-to-ceiling colourful artworks adorning free-standing walls and boards throughout the rooms. From the original 1920’s 2d animated Mickey Mouse classic Steam Boat Willie all the way through to the digital revolution and 3d animated films like Frozen and Encanto, the genius of Walt Disney and his team of animators, artists and designers is a wonder to behold.

From original character sketch ideas, (keep an eye out for an original character design of Snow White with red hair), to concept art and background paintings, storyboards and models, a working zoetrope, animator’s desk and real-life sweets model of the candy track in Wreck It Ralph, this is a once-in-a-generation glimpse into the behind-the-scenes workings of the films we all love. Aside from the sketch boards and stools that the kids can use throughout the exhibition, there are also a lot of other fun highlights for children at the Disney: The Magic of Animation exhibition.

The Queensland Museum have created a dedicated Children’s Trail of facts, questions and imaginings for kids at each of the main displays. Keep an eye out for these pockets of information, easily spotted with the ‘for kids’ sign printed inside a set of red Mickey ears.

Another feature for kids is the life-size character cut outs and backdrops at each section, designed for the perfect photo op as children immerse themselves within the scene alongside their favourite characters.

At the end of the exhibition there is also a long art table that has been set up with handouts that the children can fill in. Encouraging them to design their own character and story idea, this hands-on and creative activity also asked them to consider their character’s personality, possible special attributes and costume. It is hard not to be completely enamoured by the skill and artistry on display here. At first, my children moved quickly between each display, dancing and exclaiming as they came across or saw in the distance yet another beloved character. All avid drawers themselves, they marvelled at the impressive artistic skills, sketches and drawings on display. The loved looking through storyboard and character concepts and seeing how the original drawings were brought to life.

In particular, they all loved the idea of taking the stool and sketch board with them as they went through the exhibition. This is a great idea, but if I can suggest anything it would be to encourage them to explore the exhibition first, find their favourite spots and go back and get the stool and sketch board at the end. Otherwise, they can get tired from carrying them after a while.

When asked, they all had different things they loved about it. And for me? Having worked alongside talented animators in the past, I had a great appreciation for the hard work, dedication and skill involved in the creation of these films. And although I know this is but a very small part of the whole process involved, I loved that, even for a short while, the huge amount of talent and immense amount of work that happens behind the scenes to create the magic we see was put on display to be admired and enjoyed by all.