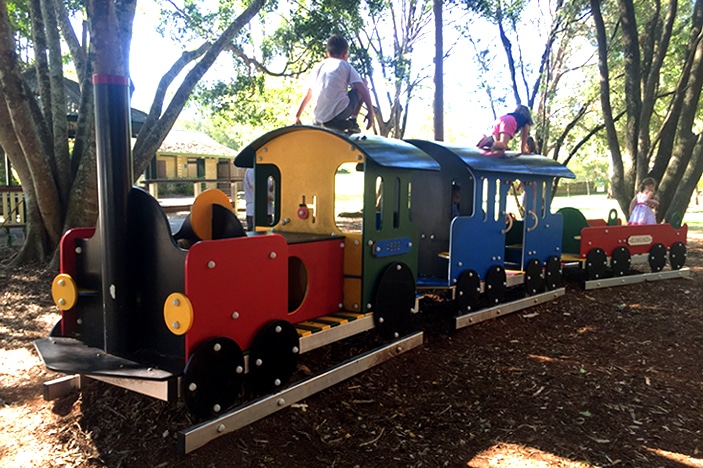 Situated right next to the Eumundi Markets on the Sunshine Coast, Dick Caplick Park is a treasure for children who will love this playground that is built both beneath and within the fig trees.

Having only been recently expanded and refurbished in 2015, and with an enviable position right alongside the ever-popular Eumundi Markets, Dick Caplick Park may be small but it sure packs a lot of punch. Although the park is right on the main street of Eumundi, to the left of the markets, you would still be forgiven if you never realised it was there.  Making the most of the Sunshine Coast’s tree-filled environment surrounds, the playground has been built both beneath and within the large, shady fig trees that grow there.  In fact, the central feature of the playground, a timber fort with rope bridge that is suspended between two trees, has literally been built around one of their trunks.

Curling away to the side of the fort is a delightful, multi-coloured train.  With numerous carriages, small compartments and an array of tunnels and hidey holes to climb through this is easily one of the biggest drawcards.

Along with the usual playground items like swings, rocking animals, see-saws and spinners the playground also features a new “Revo” giant spinning wheel (think Hamster wheel for children) which is the first of its kind on the Sunshine Coast as well as an impressive new Roplay climbing ball – which is unlike any climbing structure I have ever seen before.

Right next to the playground is a large field of grass which would be awesome for both a picnic or a game of cricket / soccer / frisbee – anything really.  There is also a basketball hoop and half court for any budding players you may have.

Every aspect of this playground lends itself to fostering imaginative play within children.  Most noticeable though is the colourful train, what with its different compartments and driving section built on tracks on the ground.  The day we visited, children were climbing all over this, taking turns being the driver and passengers all off to different, exotic destinations.

The wooden fort is also great for childhood games of kings and pirates – or your children may do what my kids did and pretend they were fairies and it was their home amongst the trees.

The park is right on the main street of Eumundi, so there are car parks that run right alongside the park, making it easy to access.  In saying that, market days will make finding a good carpark next to it hard so if it is just the park you are wanting to visit then maybe avoid it during those periods (Wednesday and Saturdays).

There are flat, concreted pathways that wind throughout the playground to the different equipment as well as plenty of picnic benches beneath the trees and even a gazebo for carers to relax on as they watch their children play.  A small toilet block (with a disabled toilet) is right next to the park and easy to access.  As the park is beside the markets there is no shortage of food and drink options what with the numerous cafes and restaurants that line the main street and the amazing market food that is available on market days. 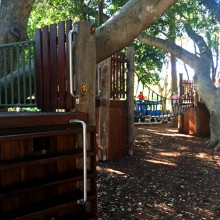 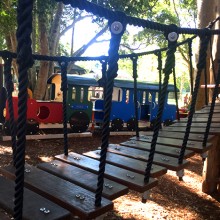 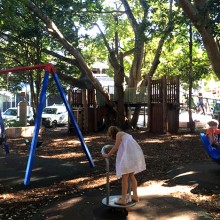 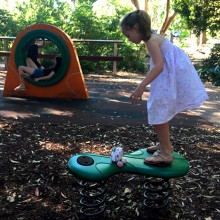 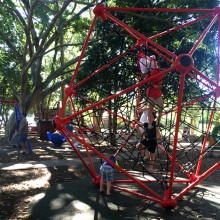 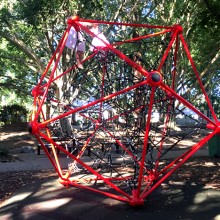 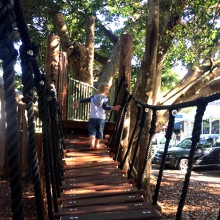 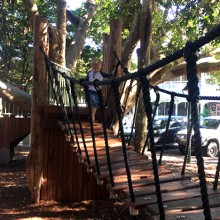 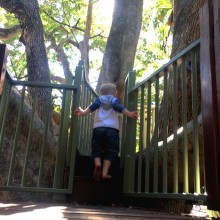 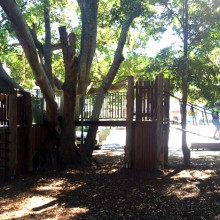 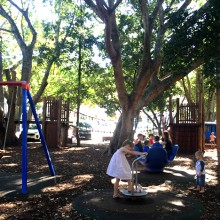 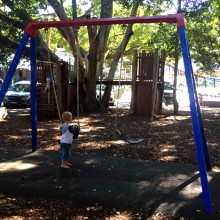 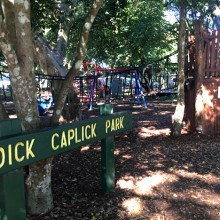 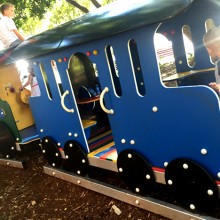 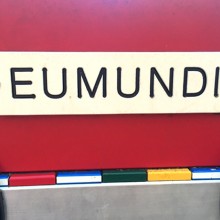 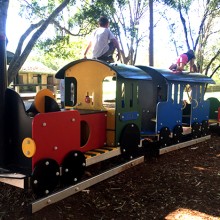 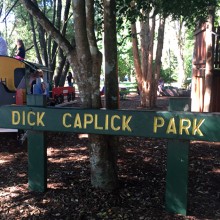 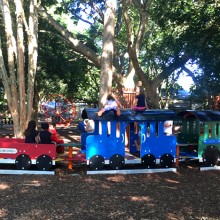 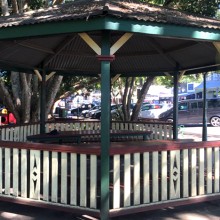 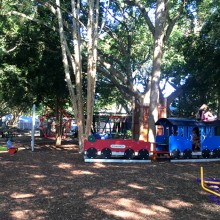 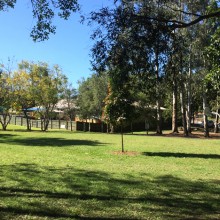 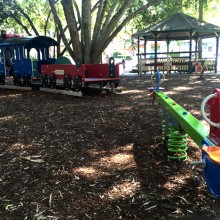 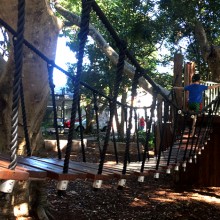 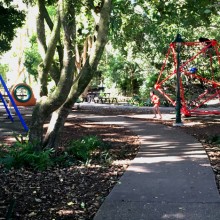