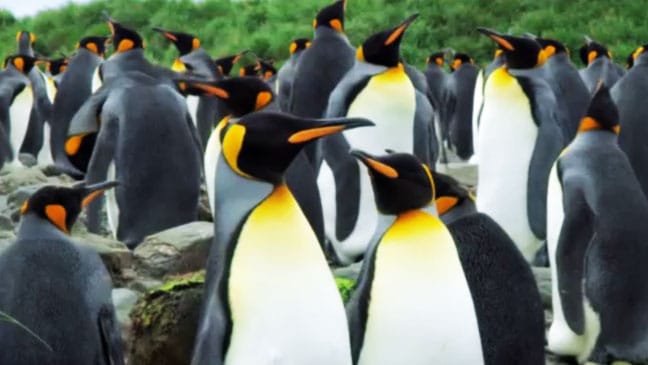 There is very little not to like about David Attenborough’s 3D documentary film, The Penguin King 3D.  True, these flightless birds have been featured in more than their fair share of blockbuster movies in the past but with their dinner jacket attire and two footed waddle there is something about them that draws human affection and interest time and time again.

In The Penguin King 3D, Attenborough chose to focus on the second largest breed (next to the Emperor penguin) the King Penguin.  Shot on the extraordinary sub-Antarctic island of South Georgia, the film tells the story of a young King Penguin on his life journey from adolescence to fatherhood.  Illustrating a penguin’s natural life cycle and focusing on their human-like love for one penguin and fierce protectiveness of their offspring – it’s easy for audiences  to relate to and be drawn in to the emotion and drama of the documentary’s story as it unfolds.

Set in “Penguin City” alongside brawling elephant seals, albatross and six million penguins, it’s hard not to be moved as our carefree bachelor searches for love, finds it, starts a family and then battles many dangerous predators as he fiercely protects the family he now loves.

Although shot as a documentary, you can tell the film has been created with its movie-going audience in mind.  The big orchestral score pulls emotions where they are needed and the film actually features several penguins as its hero character, with Attenborough pointing out it would be near impossible to film just the one bird as they were all so identical it would be hard to be sure he was filming the same one without marking them.  It’s clear this would be true.

There’s an unexpectedly funny moment where our hero’s ‘cousin’ realises the egg he’s been sitting on for the last few months is in fact a large white stone and a cleverly edited scene of our hero darting quickly through the waves before arriving home just in time to rescue his chick.

David’s narration of the tale has been written with a young audience in mind and with the breathtaking imagery shot impressively in 3D, this is one nature film that is sure to captivate children and adults alike.