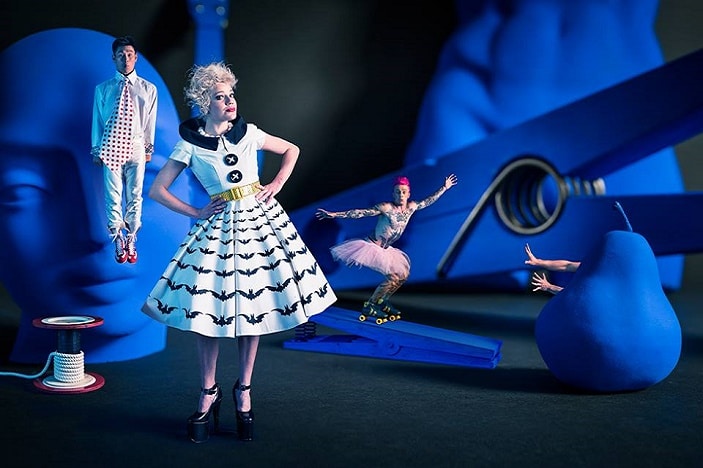 Get ready to be amazed as Australia’s national circus company, Circus Oz, takes to the stage in a physical theatre spectacular full of energy, tumbles, leaps and spins. Circus Oz, famous for their explosive animal free circus performances, are known for taking their audience on an emotional journey and redefining circus performances as we know them.

In Circus Oz : Model Citizens, the multi-talented cast explore what it really means to be a model citizen in today’s modern society. This visual feast for the eyes will break conventions of scale, as oversized everyday objects become an intriguing world of possibilities with enlarged set pieces becoming exciting and unexpected circus equipment. Just think hand stands on the top of an upright giant peg or juggling whilst balanced on an oversized stack of weighing scales.

There is a lot of buzz surrounding this particular Circus Oz show, as it is the first show directed by Circus Oz’s new Artistic Director, Rob Tannion, who describes the show as “Audaciously unpacking the myths of modern Australia, Model Citizens aims to challenge our preconceptions of the creative process and expectations of what our audiences will see and experience on stage”.

This thrilling circus escapade combines creativity, acrobatics aerials, juggling, contortion and trapeze with an awesome live music soundtrack and amazing lighting that will impress circus, music and theatre lovers of all ages.

Please note: The QPAC website warns that the show may contain nudity and some course language.

All shows are on at the Playhouse Theatre at The Queensland Performing Arts Centre (QPAC) which can be found at Grey Street, South Brisbane.

The show is 2 hours in duration and does include an interval.

Watch this video for a sneak peek at the amazing Circus Oz : Model Citizens

For more information and to book tickets click here

Brisbane Kids has one double pass (for two people) to see Circus Oz: Model Citizens at The Playhouse Theatre, QPAC at 7:30pm on Wednesday 12th April 2017. To enter, simply complete your details via the app below.

Competition opens at 5pm on Thursday 9th March, and closes at 10pm on Tuesday 13th March 2017.

For a list of  shows and concerts now showing or coming soon to Brisbane that your Brisbane Kids will absolutely love, take a look at the Brisbane Kids Upcoming Shows page or sign up to theBrisbane Kids Weekly Newsletter.