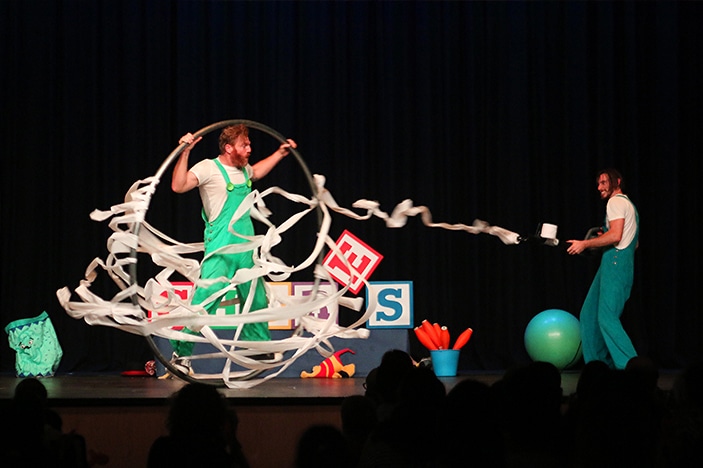 It’s a scenario all too familiar to any parent of a Brisbane kid and one that, regardless if you are the adult or the child in question, most of us can too easily relate to.  How often have you asked your child to do a quick 10 minute clean of their room only to walk in an hour later to discover loud and excitable children, toys in hand, possibly even undies on head and the room worse than when they first went in?

Chores, a show recently performed as part of the Lord Mayor’s Children’s Concerts, takes inspiration from this well-known occurrence and breathes life and hilarity into a one hour show that delves into exactly what happens behind that bedroom door as two brothers go about ‘cleaning their room’. 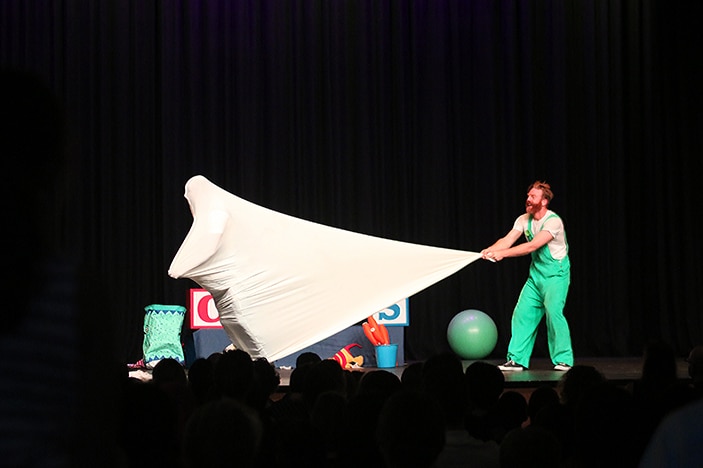 Brought to you by Cluster Arts circus company and fresh from a 5-star Edinburgh Fringe season, Chores is the hilarious tale of two brothers who have finished playing in their room and have been told to clean it up before being allowed to ride on their beloved bicycles.

This is by no means an ordinary stage performance though.  Circus performers Derek Llewellin and Julian Roberts are the talented duo who play the brothers and the acrobatic and comedic talent they display in their antics as they procrastinate to avoid any real cleaning is extremely impressive. And so very, very believable! 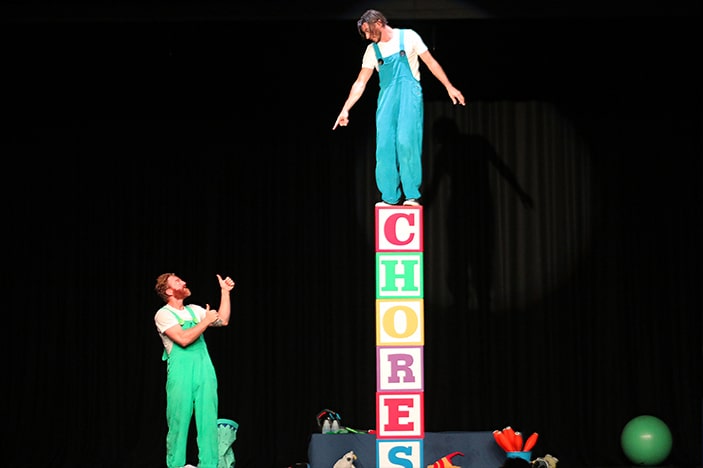 As their parents’ warnings ring out over the crowd their shoulders slump and they drag themselves about in an attempt to tidy up.  Of course, siblings cleaning a room together is never too productive (I should know!) and what entails is a mixture of mayhem, imaginative play, sibling rivalry and drama as the boys turn each task into a game and create even more mess along the way.  A sheet that should get folded ends up transforming them into a ghost, blocks become teetering towers and water pistols and a cleverly-crafted toilet paper gun end up raining down everywhere – including over the delighted audience.

With two warnings from mum and a final from dad the urgency to actually get the job done becomes apparent and the slapstick acts ramp up as the loveable overall-clad duo unwittingly manage to achieve their goal without even actually intending to do so. 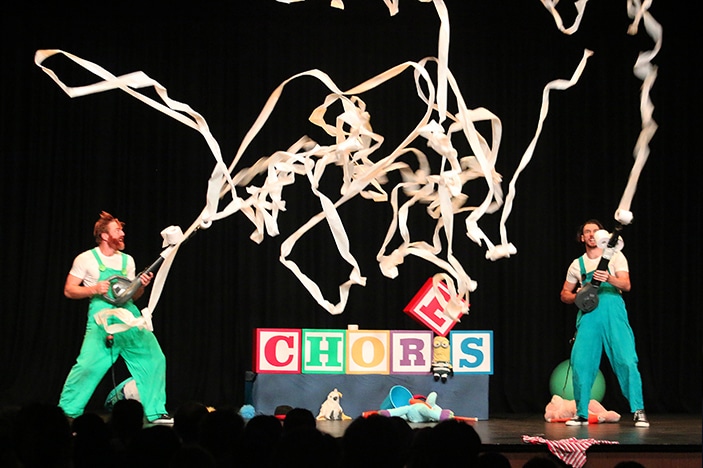 This show would not be anywhere near as memorable without the distinct skills and talent of its lead performers.  For in amongst the chaos, fun and silliness lies some serious acrobatic skill and the artists’ comedic timing and actions were equally impressive, especially in a show with almost no dialogue.

From dual juggling, riding unicycles, jumping through hoops, balancing on each other, spinning inside a Cyr wheel, tumbling and performing slapstick comedy – the guys did it all with such apparent ease that the audience could relax into the performance without realising just how much work was going into the acts they were witnessing.  In fact, it was only during our meet with the sweaty and exhausted men after the performance, when my daughter pointed out one held an ice pack to an obviously hurt hand that I appreciated just how physically demanding the show really was for them.

Even so, it is obvious to everyone in that theatre that both Llewellin and Roberts love their job. Their smiles and the fun they were having throughout the show were genuine and their delight in playing along with and to the crowd was evident.  It is clear they have lived this experience themselves in their youth and it was so easy to be lost in their performance, their expressions and characterisation transforming them into two young, mischievous boys before our eyes. 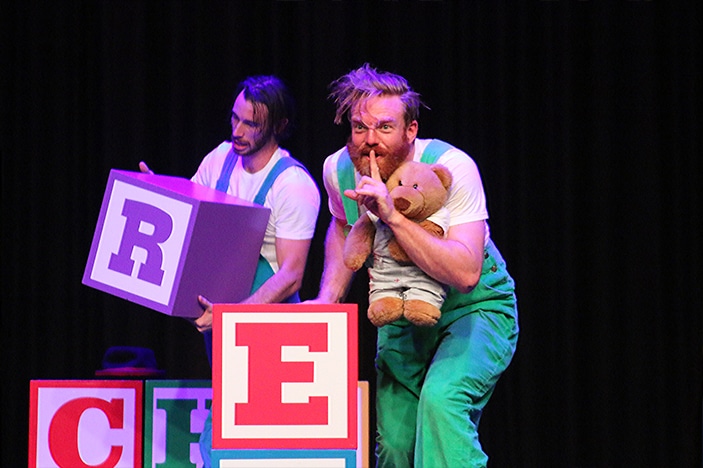 The show itself is hugely interactive with the boys endearing themselves to the crowd early with their panto-esque capers.  Playing dumb and not noticing the obvious until the children screamed it out to them, winking conspirately to them and even jumping down into the audience to hide or continue their water gun fights quite often brought the children excitedly to their feet. The fact that the children were able to move so freely and be as loud as they wanted within the theatre meant it was an hour of excitement, entertainment and general exhileration from all the children that were there.

The show’s real draw card though is that it was just so damn relatable.  I know my own children couldn’t stop laughing as they knew a lot of what the boys did and how they were so easily waylaid from the task at hand is exactly what they would do too (although maybe not with so much acrobatic skill attached). Heck, even I could relate from my own youthful cleaning attempts.  The love / hate sibling rivalry and cheeky manoeuvres were also very well recieved by parents and kids in the crowd.

With a show that has the crowd laughing from start to finish, a whole lot of action and two amazing performers there really is just so much to love about Chores, the accolades it is gathering as it tours around the world so obviously well deserved.

Which age group is it suitable for? 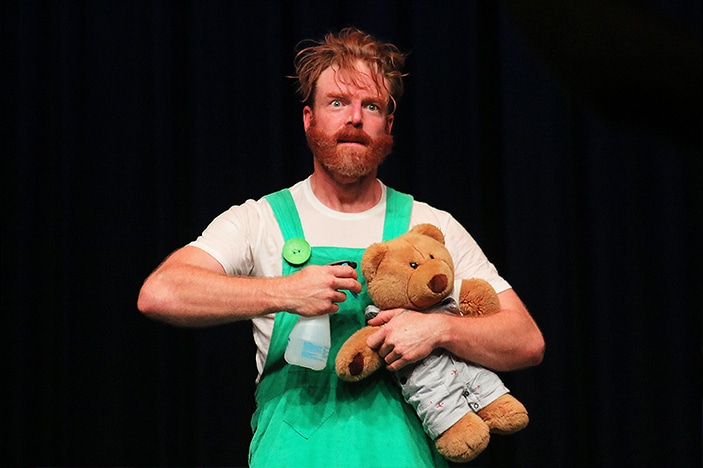 Although it stated on the website that it was suitable for children aged 5 and up I would actually say it can be enjoyed by children and adults of all ages.  I went with my three children (aged 4, 7 and 9) and my father and they are still speaking about the show over a week later.  Also, it’s 60 minute running time is perfect for children with short-attention spans – although with all the non-stop fun and craziness there wasn’t a child in that room that wasn’t riveted to the stage performance before them from start to end.

SunPac is also the perfect venue for this performance.  Having never been there before I was delighted by the cool, intimate and casually seated theatre where the stage was easily seen from every seat and the staff were relaxed about little children moving around, jumping up and down and even some sitting more comfortably on the floor down the central aisle.

Chores was part of the Lord Mayor’s annual Children’s Concerts and admission to the show was FREE.  Although the show times are now over it will hopefully be returning to Brisbane soon – stay tuned for more information on this and be sure to check it out when it comes back.  Your kids will love it – although I can’t guarantee they won’t get some ideas of their own for next time they are banished to their room and asked to ‘clean it’. 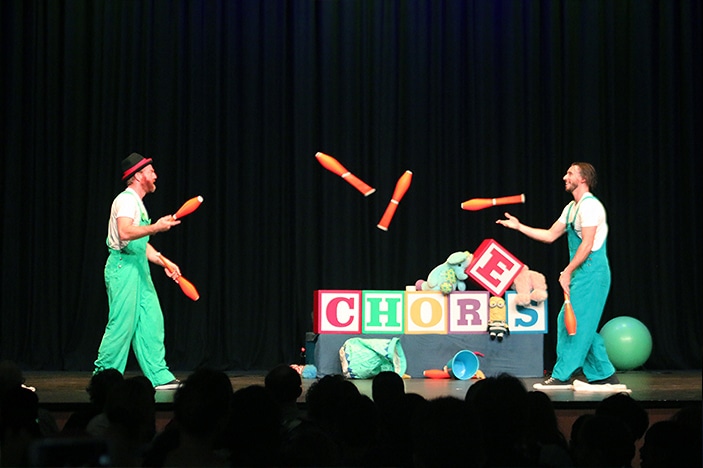 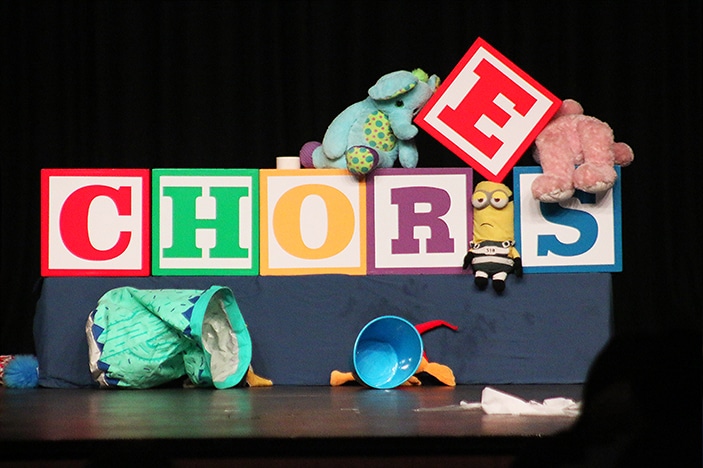 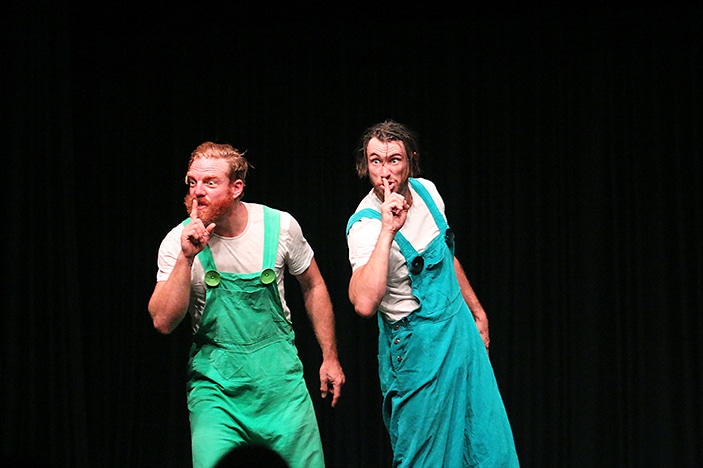 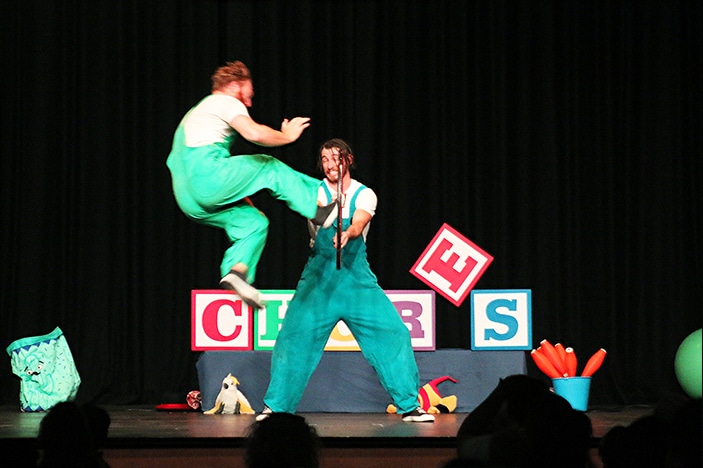 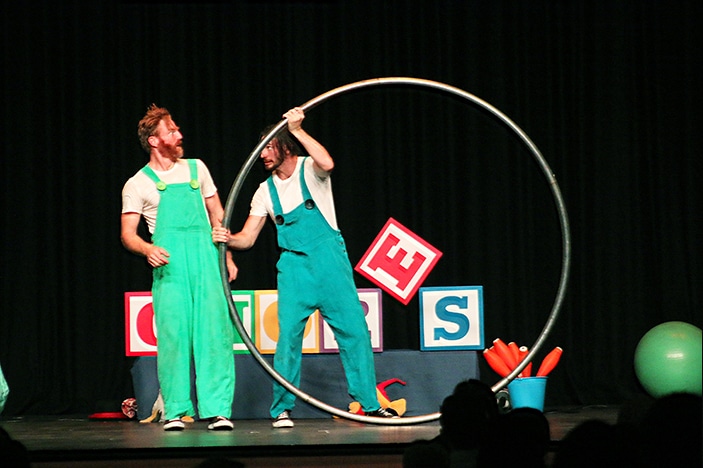 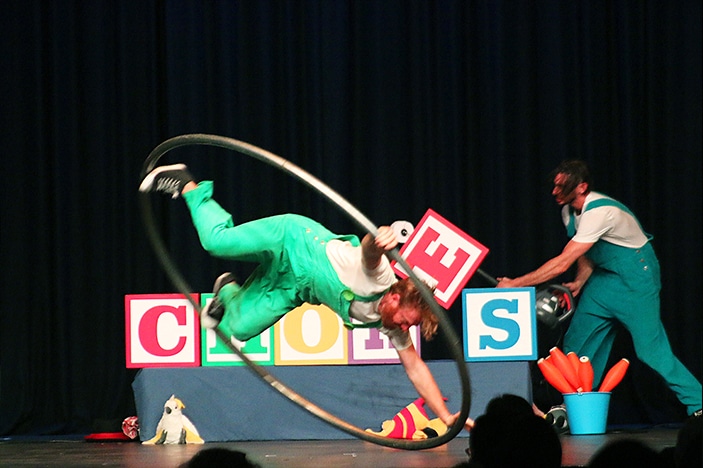 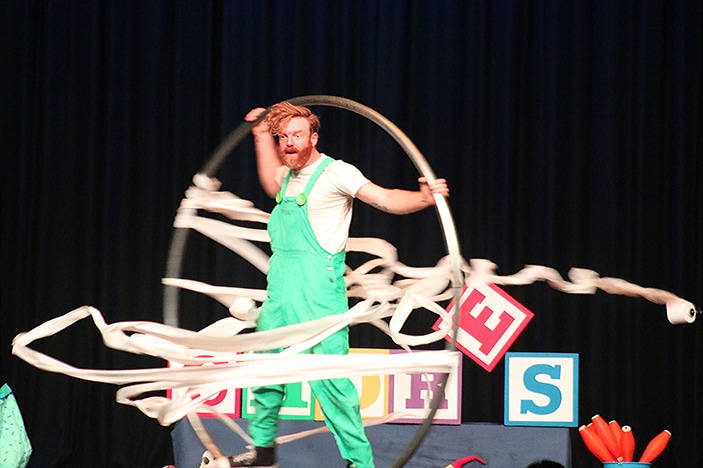 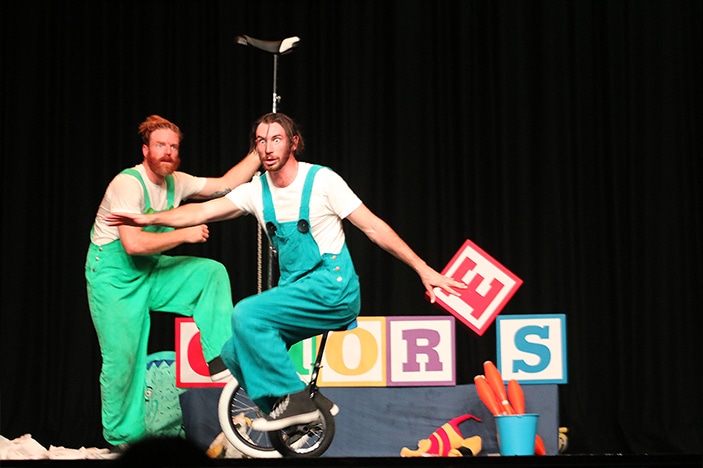 Melanie Byers
In a previous life, Melanie threw the obligatory hat in the air on graduating with a degree in Communications, packed her bags and spent 15 years working for the film and television industry in London and Australia. Today Melanie has 3 children and is keen on adventure around Brisbane, The Gold Coast and Sunshine Coast. Melanie has a passion for writing and a love for gathering and creating memories with her family – especially while her kids are so young.