Carnival of the Animals | Brisbane January 2016 – A review 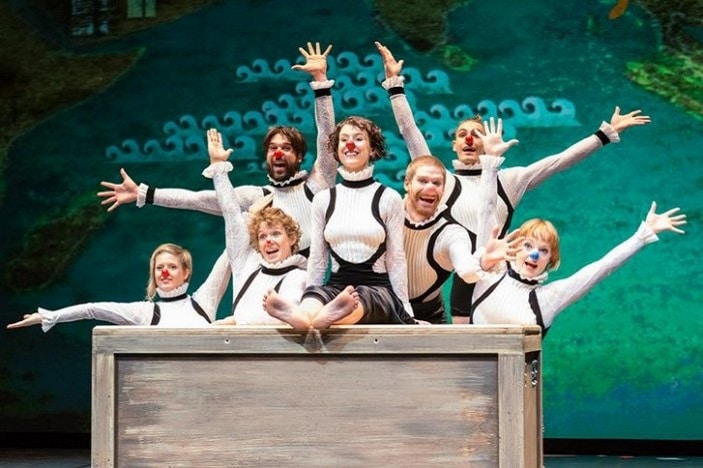 THIS SHOW HAS NOW FINISHED

QPAC presents Circa – Carnival of the Animals as part of QPAC’s SummerSet in January 2016.

CIRCA – CARNIVAL OF THE ANIMALS

Get ready to be amazed these school holidays as the internationally celebrated circus company, Circa,  take to the stage in a physical theatre spectacular full of energy, tumbles, leaps and spins. Carnival of the Animals takes you on a wild ride around the world visiting various countries and exciting animals with a back drop of stunning digital animations and beautiful classical music. The audience will witness creatures from sea and land brought to life on stage by amazingly talented acrobats and watch as zebras juggle, kangaroos somersault and elephants dance .

This thrilling circus escapade combines creativity, acrobatics and  movement to a gorgeous soundtrack that will impress circus, music and animal lovers aged 2 years and over.

Circa – Carnival of the Animal performances

All shows are on at  the Playhouse, QPAC, Grey Street, South Bank.

The performance is 50 minutes in  duration and does not include an interval.

TICKET PRICES FOR CIRCA – CARNIVAL OF THE ANIMALS

Carnival of the Animals Review

Brisbane based Circa is once again wowing kids of all ages at the Playhouse, QPAC, with Carnival of the Animals, an educational and fun theatre experience. This thrilling circus escapade is made up of 50 minutes of breathtaking acrobatics, set to Camille Saint-Saëns’ renowned composition of music.

A salute to feathers, furs and fins, Circa’s acrobats bring many different animals to life, in the most imaginative and creative ways. The show is enthralling for all ages, without being overwhelming for younger children. At times it is beautifully melancholic, while at other times it is delightfully frivolous, with plenty of subtle humour that older children will love.

In fact, you can’t afford to look away for a moment, lest you should miss one of the incredible stunts that have the whole audience oohing and aahing. The resounding applause and cheering at the conclusion of the show is indicative of how much the audience has appreciated the talent on stage.

Here’s what three Brisbane Kids had to say about Carnival of the Animals:

Abigail (four years): I loved all the tricks. My favourite was the butterflies when they came out of their cocoons.

Alex (seven years): I want to go home and try out some of those stunts, like the hoola hoops.

Amelie (ten years): I thought it was all amazing. And it was so funny when they were jumping over the skipping rope, with one acrobat on top of the another! How did they do that?!

Carnival of the Animals has been touring and wowing Brisbane audiences since the Out of the Box Festival in 2014, and it’s the sort of show you could just watch again and again. We highly recommend it to all Brisbane families next time it’s in town!

This video gives you an idea of what to expect at Carnival of the Animals, along with some more candid opinions from Brisbane Kids –

Keep an eye on the Brisbane Kids website and Facebook page to be the first to hear about upcoming performances of Carnival of the Animals in Brisbane.