Home > Parenting 101 > Can you leave your kids in the car while you get petrol?

Can you leave your kids in the car while you get petrol? 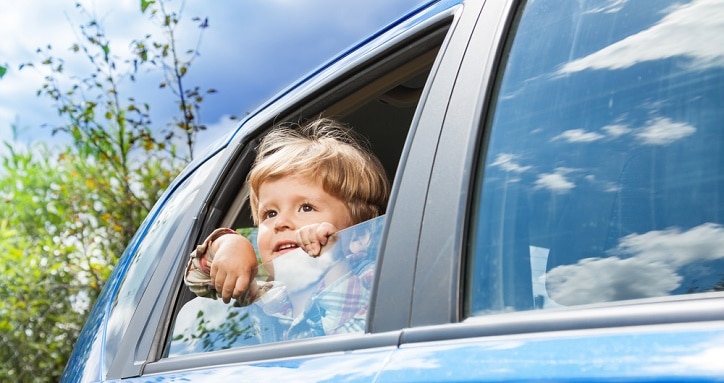 Leaving the kids alone in the car at a petrol station is often a contentious topic, with much of the community divided in their opinions and not afraid to criticise those who take the other side, as we recently discovered when trying to gather anecdotal information for this post on our Facebook page.

What we found were that those in favour of taking their kids with them were often being judged as overprotective ‘helicopter parents’, yet those who left their kids in the car often felt that they were the ones looking out for the best safety of their children. Add to that the fact that most authorities recommend keeping your children with you, while service attendants inform us that 99% of their customers leave their kids in the car and that the service stations tend to be set up with the pumps in clear site and a fast transaction process in order to make this a reasonable option.

So which side, if any, is right? What does the law have to say? We take a look at the facts and the reality of this situation to help clear things up.

Leaving kids in the car — the debate

Here are the most common arguments we uncovered in the debate over whether to leave the kids or take them with you:

Taking the kids with you:

Leaving the kids in the car:

Leaving kids in the car — the facts

In Queensland, there are several laws that relate to leaving kids unattended and keeping kids safe. The main ones are as follows (paraphrased and summarised but full details can be found here):

Leaving a child under 12 unattended A child under 12 years should not be left for an unreasonable time without making reasonable provision for the supervision and care of the child (whether the time is unreasonable depends on all the relevant circumstances). [See Section 364A, Criminal Code Act 1899]

Duty of person who has care of child Every person who has care of a child under 16 years has a duty to provide the necessaries of life for the child; to take reasonable precautions to avoid danger to the child’s life, health or safety; to take reasonable action to remove the child from any such danger; and to not omit to perform a duty that may result in consequences to the life and health of the child. [See Section 286, Criminal Code Act 1899]

Endangering life of children by exposure A child under 7 years must not be unlawfully abandoned or exposed whereby their life or health is, or is likely, to be endangered, or the child is likely to be permanently injured. [See Section 326, Criminal Code Act 1899]

There are also Queensland road rules relating to making sure a vehicle is secure when you leave it. These include:

Making a motor vehicle secure Before leaving the vehicle, the driver must: Apply the vehicle’s parking brake effectively; switch off the engine if the driver will be more than 3m from the closest part of the vehicle; and remove the ignition key if there is no-one 16 years or older remaining in the vehicle. [See Section 213, Transport Operations (Road Use Management) Act 1995] 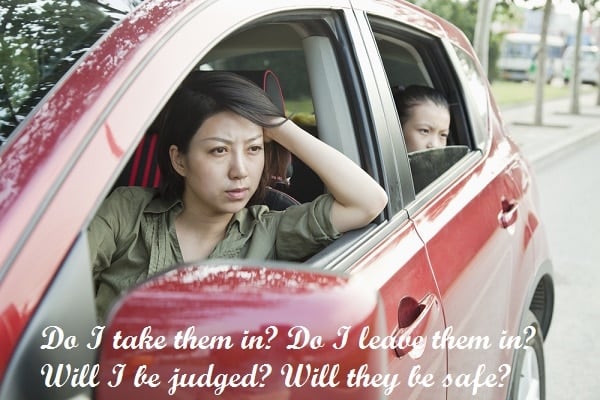 Leaving kids in the car — the reality

In reality, this generally means that neither side in this ongoing debate is always either right or wrong. What it means is that there are variables in each situation that determine whether or not it is reasonable or acceptable to leave a child alone in a car while filling up with petrol or going to pay inside a service station. So, to a large extent, it is up to the parent or guardian to judge the circumstances and the best safety of their child. However, in taking on that onus, parents or guardians must make sure that they are well-informed on all the considerations that might affect their decision.

Leaving kids in the car — the considerations

Since the legality of leaving kids alone in cars is subject to the particular circumstances, it is advisable that we consider these variables EACH time we get to a petrol station, rather than having one fixed idea of what is right or wrong. Considerations we can take into account include:

> How hot or cold the day is (bearing in mind that heat levels in Brisbane can reach unsafe levels within a car in a matter of just minutes, regardless of whether the windows are open or the car is in shade — see the RACQ Temperatures in Cars Survey for full and enlightening details)

> How long you will be away from the car for

> How old the kids are

> Whether the car will be in full view at all times

> Whether the kids have any health issues

> Whether the kids are happy and calm or distressed or fighting

> Whether there are any dangers within the car that the kids may be exposed to, e.g. choking hazards

> Whether the kids have everything they may need in order to keep them unharmed and healthy, e.g. asthma inhaler

> Whether you have put the parking brake on, switched the engine off and taken the keys with you

Perhaps if we can appreciate that there is no constant right or wrong in this matter, we can make a carefully considered choice each time for our own children, and we can stop judging others for their decisions if they are truly doing the same.

7 responses to “Can you leave your kids in the car while you get petrol?”