Brisbane Parks That Have Free Wifi

Brisbane Wi-Fi parks are making life easier for parents of Brisbane Kids. Adding to the existing fantastic features of some of our great Brisbane parks, bigger kids and adults can now take advantage of the FREE wireless internet access provided to many of the more popular playgrounds. The service is available 24 hours a day, seven days a week and can be accessed from any Wi-Fi enabled device (search your wireless networks and select ‘CouncilWiFi’). We’ve compiled a list of these Brisbane Wi-Fi parks and public spaces, along with some of their other great attributes.

On top of being a Brisbane Wi-Fi park, Booker Place Park has a tonne of great features, including wheelchair accessible toilets, a playground, BBQ, shelter, wheelchair access, a basketball half-court, skating, BMX and rollerblading facilities, bikeway and walking paths, and a rebound wall. Take a closer look at Booker Place Park and you will soon be heading their to catch up on some internet while your Brisbane Kids play.

Free wireless internet is just the icing on the cake at the Mt Coot-tha Botanic Gardens. For a full run down on what there is to do at the gardens, check out our review here –

With wireless internet accessible near the first car park, Carindale Recreation Reserve also has a playground, BBQs, shelter, wheelchair access, bikeway and walking paths, a basketball half-court, and a rebound wall to keep the whole family entertained for hours at a time. For more information on this south Brisbane playground and this wonderful Brisbane park, take a look at our review.

Located between QUT and the lake, the free internet access in this CBD Brisbane Wi-Fi park is sure to attract many students and city workers. The City Botanic Gardens has a fantastic playground with sensory play equipment as well as wheelchair-accessible toilets, water, shelters and wheelchair access.

The Einbunpin lagoon and surrounding reserve is home to turtles, eels, ducks and other native birds. The fenced playground, picnic facilities, toilets, and WIFI make it a great place to spend the day. Free council wireless internet access can be utilised next to the bridge in the centre of this park.

With free Wi-Fi found near the car park and the playground, at Glindemann Park you will also find wheelchair-accessible toilets, BBQs, shelter, wheelchair access, a basketball half-court and skateboarding, BMX and rollerblading facilities. We’ve written a review of Glindemann Park, which can be found here –

Wheelchair-accessible toilets, play equipment, BBQs, shelters, a basketball half-court, cricket pitch/nets, and BMX, skating and rollerblading facilities can be found at Gregory Park in Paddington The free Wi-Fi access is best on the Baroona Road side, west of the playing fields and the half basketball court.

Guyatt Park has a playground, BBQ, a shelter, wheelchair-accessible toilets, wheelchair access and bikeway and walking paths. It’s also very flat and is adjacent to the Guyatt Park CityCat terminal, making it quite versatile.

Not just a free Brisbane Wi-Fi park, Hidden World Park in Fitzgibbon is also a really exciting playground for Brisbane Kids. To find out more, check out our full review of hidden world and discover why it is considered one of Brisbane’s best playgrounds. 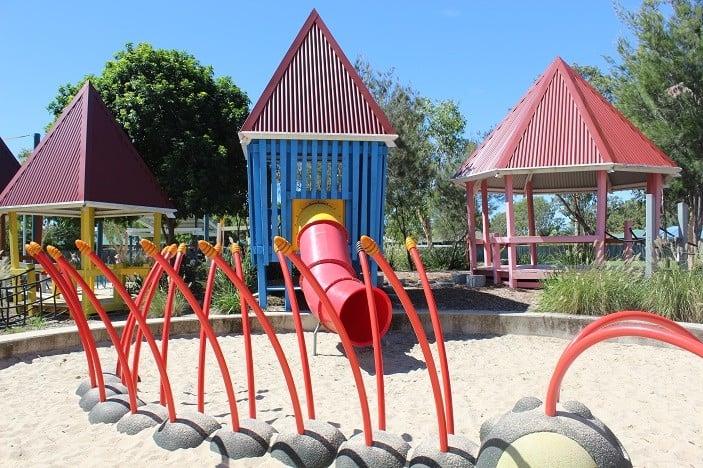 This Brisbane Wi-Fi park has internet access near the corner of Wickham Terrace and Berry Street. King Edward Park is a lovely green space packed with a heap of history, including the old Tower Mill and air raid shelters. Linking Wickham Terrace via a steep slope to Turbot Street and hidden underneath large fig trees, there are several quiet benches and a large checkerboard, though no playground equipment.

Another Brisbane wireless internet space is King George Square. Wi-Fi is available halfway between Ann and Adelaide Streets. This space has water fountains and is very accessible.

New Farm Park is a massive space, catering to the whole family. Wireless internet access can be found near the rotunda at the river end of the park. Check out our review of New Farm Park here and pictures showing all the amazing trees that make for a great outdoor adventure for your Brisbane Kids. 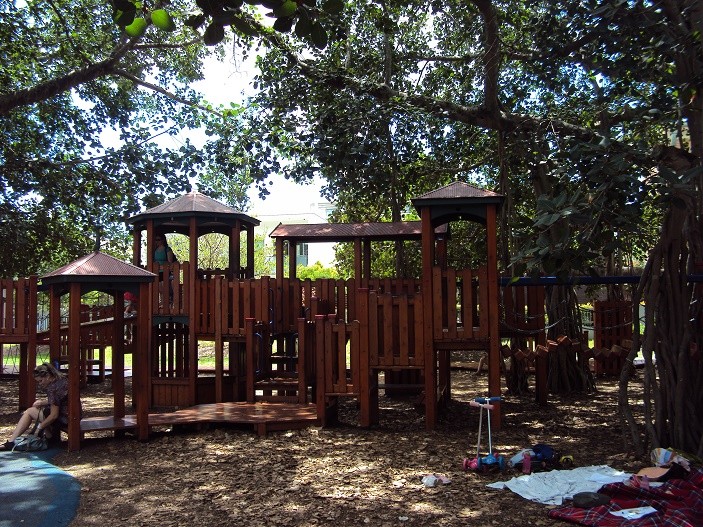 Brisbane City Council’s free wireless internet can be located near to the West End ferry terminal. Orleigh Park has wheelchair-accessible toilets, a playground, BBQ, shelter and lots of shady trees, wheelchair access and a bikeway and walking path. Check out our notes on Orleigh Park for a wonderful inner Brisbane city playground.

Situated between Queen and Adelaide Streets, Post Office Square is most often a thoroughfare space used by city workers in peak times. Several benches provide some great spots to have lunch and watch the hustle and bustle pass you by. Wireless internet is found throughout the entire square.

An absolutely huge park on the west side of Brisbane, Rocks Riverside Park is a fabulous and fun-filled Brisbane Wi-Fi park. Wireless internet is available next to the shed on the car park side of the park. Take a look at our full review of Rocks Riverside Park for a wonderful free Brisbane water park for kids.

7th Brigade Park, just next to Westfield Carindale, is a great park for kids. It has a large road set-up for bike-riding and a huge covered play structure better known as Kidspace. Free wireless internet is an added bonus!

Teralba Park has wheelchair-accessible toilets, a great playground with flying foxes, wheelchair access, BBQs, shelters, a basketball half-court and now free Wi-Fi. Read our full review of Teralba Park for a relaxed park for your kids to play in.

Brisbane Wi-Fi parks are making life easier for families of Brisbane Kids. Keep an eye on this page for information about wireless internet parks in Brisbane as the council adds more to their list.

One response to “Brisbane Parks That Have Free Wifi”