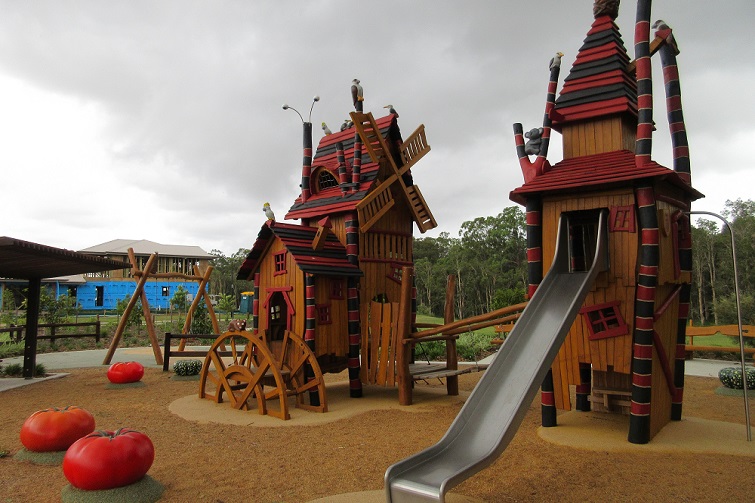 When art and culture combine to create a playground you get Bray Farm Park which is a playground quite unlike any other with a Harry Potter vibe and a Halloween theme, making for a fun and inspiring playground adventure. Your potter fans will love to explore what is coined by locals to be the Harry Potter Park. It isn’t a huge park but what it lacks in size it makes up for in character. Tucked away in Griffin, a suburb north of Brisbane is Bray Farm Park. A new park flanked by nature and designed to entertain children and challenge their physical abilities. The main focus of the park is the ‘Harry Potter’ like structure which has turrets, windows, a bridge, fireman’s pole, climbing net and slide. Brisbane Kids playing at Bray Farm Park can immerse themselves in nature, with the park surround by an abundance of native trees. Perhaps they could even spot koala’s or kangaroos!! There are a variety of bird and animal statues situated in and around the play equipment, which could make for a fun game of I-spy. Large pumpkins and tomatoes are also dotted throughout the park. Children can test their climbing skills on the fireman’s pole or scale the large climbing net, to see if they can get as high as the trees.

Concrete paths weave in and around the park, and extend beyond, making the area accessible for wheelchairs, prams, scooters and bikes. Unfortunately, however, there is no direct concrete access to the equipment, as the base of the playground is mainly bark. There are a shaded picnic table/seating and lots of shade supplied by trees surrounding the playground. The park is not fenced, and relatively close to the road, so extra care with children should be exercised.

There are no toilet facilities located at the park though these do often come later when locals request. If you are local to this park or enjoy it, then we suggest you contact your local councillor or state minister to see how they might be able to assist.

If you fancy a coffee, why not grab one from nearby Café 63 at 185 Brays Road, Griffin (they even have a drive-thru).

Bray Farm Park is located in Riverbreeze Estate on Rivermint Street, Griffin, QLD. For another equally awesome Harry Potter experience head to the Store of Requirements at Samford. 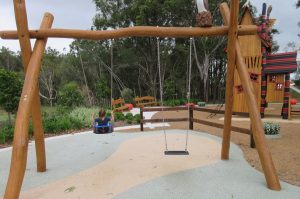 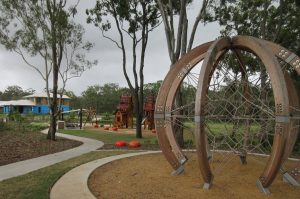 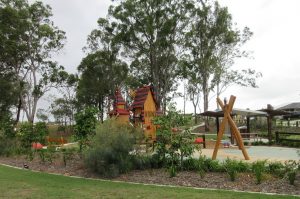 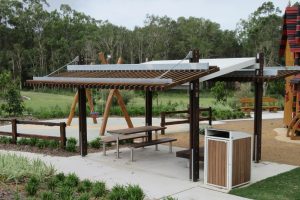 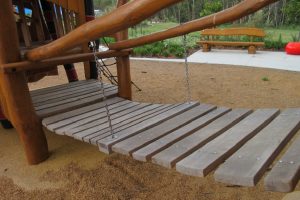