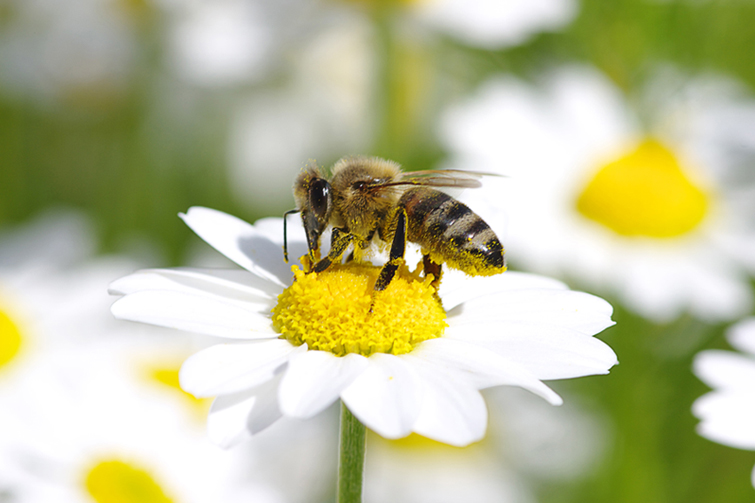 Far from being an annoying little insect with a sharp sting, bees are one of the most productive and vital insects. Here are some fun facts about bees for your next school project. Facts about the Honey Bee Colony The honey Bee colony is a very productive and well-organised environment known as a superorganism. Every individual plays a specific role in the bee hive. Bees depend on each other as they work together to create an effective and successful colony. Bees will spend the flowering seasons gathering nectar and pollen to rely on these stores during the winter months.

A Honey Bee colony typically consists of three kinds of adult bees: the workers, the drones and the queen.

The most important bee in the colony is the queen. The role of a new queen bee is to reproduce. Queen bees can lay as many as 2000 eggs per day! Although that sounds like challenging work to us, the queen bee lives the longest out of all the bees in the colony – which can be up to 8 years.

If you are wondering how a queen bee is made, humans are still figuring this out 100% but this is what is known. All baby bees are fed a special food called royal jelly but then, after a couple of days, only the larvae destined to become future queens are fed the pure royal jelly. You can read more about this in a publication on Royal Jelly Proteins.

Of the 10 or so Queens that develop.. one will be born first and she will eat the rest. If she is born at the same time as another Queen, they will fight to the death.

All of the other female bees in the colony are known as workers. As their name suggests, the average worker bee works hard building the nest, collecting food, feeding all other members of the hive, looking after the larvae, protecting the hive and making all the honey. It’s not hard to see why, depending on the season, worker bees only live from 30 days to 6 months. Worker females can’t make more bees. There are usually tens of thousands of worker bees in each hive.

Drone bees are all male bees in the colony and are the only bee that will mate with the queen. They don’t live in the hive either but live up to 5km away in “drone zones”, 3-10 metres above the ground. Once they have mated the queen, they die.

Why are bees important? Bees are the world’s most significant pollinators and have an important role in the production of crops. As bees fly from flower to flower, small amounts of pollen stick to the hairs on their body. Each time that they fly off to another flower, they leave some of that pollen on the female part of the flower.

This pollinates the flower and helps the plant produce seeds. This process, known as pollination, is a crucial step in the production of our crops and produce. Without bees, many of the fruits and vegetables we grow would cease to exist!

For major food crops such as wheat, rice, corn and oats, the wind carries the pollen that pollinates the plants. However, many of our other food crops rely on bees for pollination. Of the 352,000 flowering plants and crops, nearly 90% rely on pollinators for reproduction. Australian native bees can also pollinate many fruits and vegetables, including tomatoes, watermelon, passion fruits, strawberries and mangoes.

Bees are such effective cross pollinators that farmers transport hives of bees between crops to help their production.

Buying Australian honey means you are helping to support an industry that the Australian food bowl relies on. Australian honey is held to a higher standard in regard to disease prevention. There is also a beekeeping code of practice that Australian beekeepers follow.

There has recently been a lot of controversy around well-known Australian honey brands sourcing honey from overseas to fulfil demand. Sometimes this has gone a step further with what is known as fake honey- where things are added to the honey-like corn syrup and rice syrup.

So how do you make sure you are buying Australian honey? Farmers’ markets are an excellent way to source local honey and local beekeepers can also be found selling their honey on local community Facebook groups.

Buying local honey also supports ethical honey. Ethical honey means the welfare of the bee is considered in the process, where the bees live how they would in nature. Harvesting only happens when the bees have ample honey and output is less determined by consumer demand and more by the production efforts of the bees.

What are Australian Native Bees

Just note even though some native bees are stingless, they can potentially bite if threatened.

Native bees can be so small that sometimes you might confuse them with tiny black flies. Australian Native bees don’t produce honey but rather nectar. The nectar they produce feeds their young. It is only produced in small quantities and tastes like super sweet honey. The benefit of having Australian Native Bees at your house is that they will help to pollinate your garden (and your neighbours’ gardens too).

Native bees live in hollow logs, tree hollows and in urban places. They can often be found nesting in walls, water metre holes and other dark and dry areas.

Bee facts that no one knows

Here are some more interesting facts about bees that are rarely known or are just plain weird.

How to bring bees to your backyard

Bee populations are on the decline. With bees being as vital as they are, there are numerous ways you can increase their numbers in your area and help with the cross-pollination of your plants and flowers.

The best way to attract bees to your backyard is to plant bee-friendly flowers. Check out our list here of tips to keep your garden bee-friendly and the best flowers to attract bees in Australia. In the summer months, you can also help the bees by leaving some shallow water dishes in your backyard. Just make sure you put some sticks across the plate so they can drink and get themselves out of the water.