Art On The Wild Side @ Children’s Art Centre: The Review 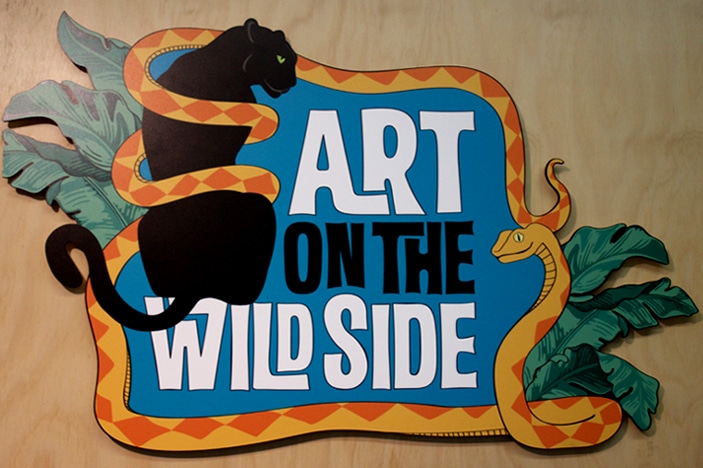 THIS EXHIBITION HAS NOW CLOSED.

If you and your Brisbane Kids are exploring GOMA these school holidays then make sure you pop in to the Children’s Art Centre where their latest exhibition, Art on The Wild Side, is currently being presented.  Designed to explore how artists use animals to share different ideas and experiences there are numerous digital activities set up in the space to challenge little minds. 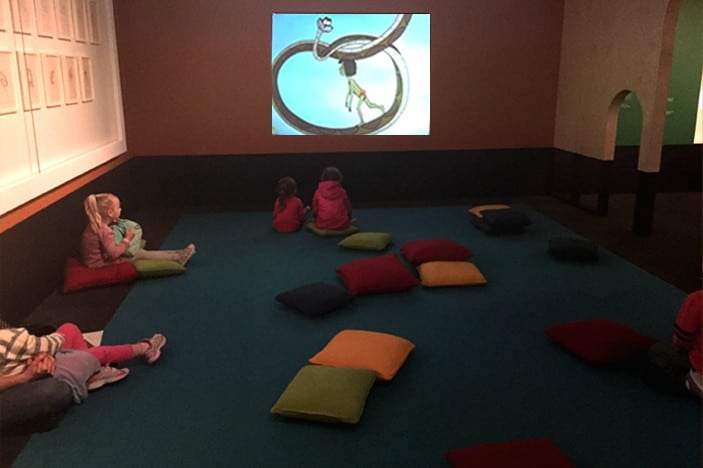 As you first step through the entrance archways for the exhibit you will be greeted with a dimly lit room which has obviously been designed for small bodies to relax in.  A scattering of cushions are a further invitation to get comfortable and my Brisbane kids were quick to take a front row position on the floor in front of what appeared to be a screening of the children’s classic animated film “The Jungle Book.”

French Artist Pierre Bismuth’s version of the film though is a little bit different with each character speaking a different language to the others.  Bismuth aim of illustratrating that although we may not all speak the same language we can still communicate with each other about ourselves and the world around us was well was clearly demonstrated by the rapt attention his audience had on the screen.  My children, aged 5 and 3, were perfectly happy to settle in for the long haul amongst the sea of lounging bodies as the film continued to play and when I asked them later with amusement if they realised that the characters were not speaking English and in fact were all speaking a different language from each other they simply answered with an “of course mum” before continuing their viewing.  My eldest in particular enjoyed telling me what she interpreted to be happening and what was obviously being said along the way – quite accurately too! 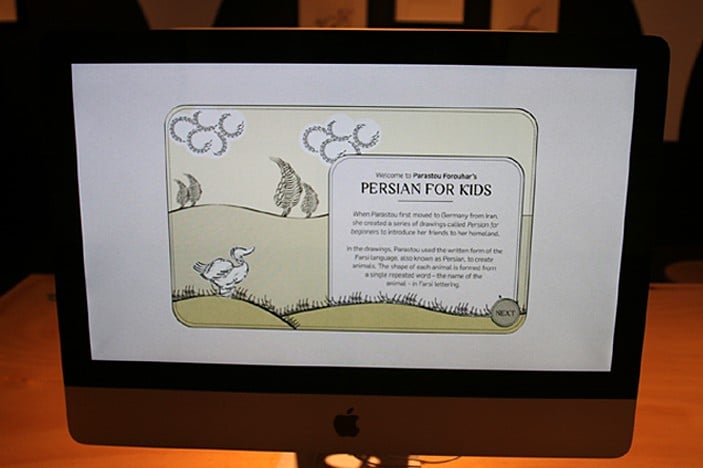 Continue on through the next set of archways and you will find a long table set up with computers with two different artist’s interactive activities to explore.

On one side you will find Parastou Forouhar’s Persian for Kids project.  Parastou, originally from Iran, introduces us to the idea of creating an animal out of the written form of the Farsi language, also known as Persian.  By repeating the symbol of a single word, the name of the animal, around the outline of the creature you are essentially creating a Zoomorphic Calligraphy (the drawing of animals using Arabic script).

Kids are encouraged to choose an animal shape and then use the relevant symbol to make it’s outline.  Symbols can be made bigger or smaller and rotated around to best fit the animal’s shape.  When your Brisbane kid is happy with their image they get to watch an animation of their character running.  This was much better suited to my 5 year old who had the patience and skill to manipulate the symbols with the mouse best. 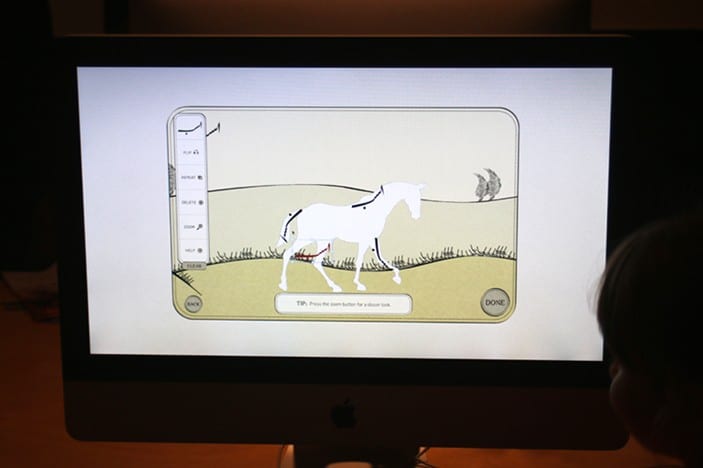 The Call of the Wild

Australian Artist, Justine Cooper, spent a lot of time at the American Museum of Natural History in New York.  Whilst there she became fascinated by the long corridor of lockers that housed the many animals of the museum’s collection and her side of the Art on the Wild Side exhibition is focussed around this.  Cooper created a film of a walk-through of the deserted corridors but inserted noises that the animals residing in the lockers would have made if they were alive.  This film plays in one corner of the exhibition and is actually quite eerie to watch.  My children were mesmerised by the idea of so many animals hidden within the walls and took turns guessing what animals they could hear. 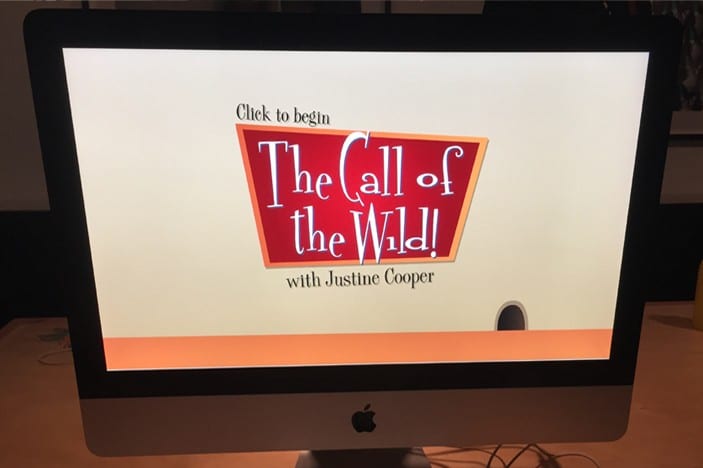 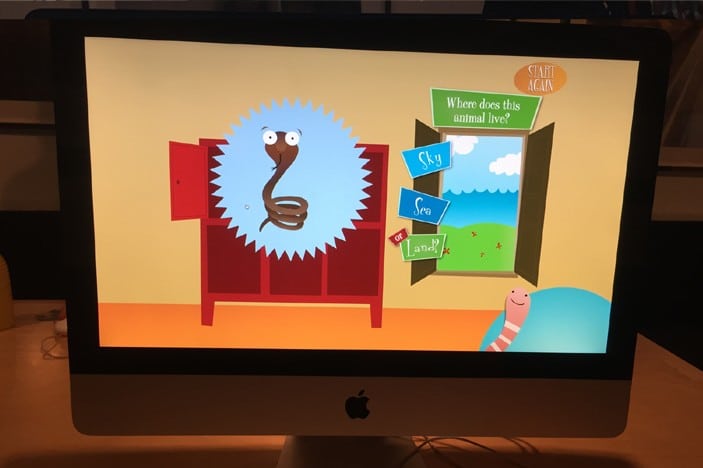 On computer’s Cooper has set up a fun digital activity that also plays along with the corridor of animals theme.  Children are presented with an animated section of six locker doors.  Upon hearing the sound of an animal they must then guess which door the animal may be behind.  If they guess correctly then the animal is freed but they must still pick correctly if that animal belongs in the sky, land or sea before it is released for good.  When all six animals are free the game is over.  Both of my children loved this activity with my three year old in particular opting to play it over and over again.

This digitally interactive exhibition may only be small but it will grab and engage your child’s attention from the minute they walk through the first entrance archway until they leave.  Whilst smaller Brisbane kids may be just as happy to settle in and watch as much of the altered Jungle Book film as they can older children will enjoy the two different computer activities and film that have been set up in the main space.

Make sure whilst you are visiting the Children’s Art Centre you also head downstairs and check out the Robert MacPherson: Swags and Swamp Rats exhibition.  Between these two programs you are guaranteed a full day of entertainment, culture and excitement for your little Brisbane kids.