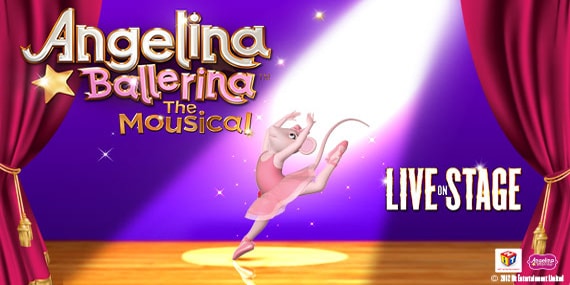 It is only 9:00am on a Wednesday morning and yet as I start to ascend the stairs that lead into QPAC theatre I am greeted not with the air of decorum and class that is usually associated with this great centre, but with a flurry of tiny bodies, frills, tutu’s and ribbons – the air alive with squeals of anticipation.  Grabbing the hands of my own two mini dancers it becomes immediately apparent we are in the right place and we continue forward, immersing ourselves completely into the layers of tulle and excitement that awaits us.

We are here, of course, to see one of the latest musicals to be staged at QPAC theatre in Brisbane.  Well, it’s a mousical actually and its lead star is none other than Angelina Ballerina herself.  That’s right!  If you haven’t heard already this delightful and hugely popular TV character is now live on stage with some of her friends and for the many budding ballerinas in the crowd today the delight of being part of the magic is obvious.  The usual merchandise is all there but the most popular with this group appears to be the light-up mouse ears and cut-out Angelina sticks that are waved cheerfully at us from a sea of outstretched hands.

Whilst the stage show is designed for children aged 3 years and up, I took both my four year old and two year old daughters along for the morning.  My four year old was especially excited as she had seen the show on television many times and couldn’t believe she would actually be seeing it “for real!”  My two year old on the other hand was simply happy to be caught up in the electric atmosphere and was quickly swept up in the pre-show excitement before we had even found our seats.  Still, from the minute the curtains opened and the stage lit up with its bright lights and sounds both girls noticeably stilled, their eyes riveted and mouths agape.

From this point on they were drawn into Angelina’s world.  The actors, adorned with character masks perched on their heads, large ears and long tails seemed to be easily accepted by the audience as the well-loved characters they portrayed.  The show opens with a burst of song and dance and continues with pretty much the same level of energy for most of its 60 minutes duration.  The storyline, which is very easy to follow, plays out much like an episode from the popular television show and is something that I am sure adoring fans would appreciate.

When we first find Angelina and her friends from Camembert Academy they discover they have been chosen to perform on their favourite television programme “Dancing With Mice!”  They are understandably ecstatic and when a Dance Captain for the show needs to be chosen it is put to the audience to decide which mouse would perform the role best.  Quite obviously, this is met with a chorus of voices calling out unanimously “Angelina, Angelina!”   I thought this small interaction with the audience so early on was fantastic as it got the crowd animated and gave the kids a sense of being part of the performance straight away.

We then see Angelina take on the role with zest as she promises her friends she will create the best dance ever for them and also help them out with their individual roles of set decoration and costuming as well.  Of course, nothing goes as she plans and as she struggles to come up with her dance moves alone she also unknowingly abandons her friends as they too struggle to make decisions as the boys and girls have very different ideas of what would be best.  Eventually, she is made to realise that it is ok to ask for help and the valuable lesson comes from learning to compromise with your friends to reach a result that everyone can be happy and proud of.

There are actually some very funny dance offs and scenes between the female friends (Gracie and Viki) and male friends (AJ and Marco) as they stubbornly demonstrate what they would like and why their ideas are better.  Once again they go to the audience with this as sections are asked to imitate the moves that the mice want to do.  My daughter actually told me at the end that these parts were her favourite and she loved the general banter between the characters.

Although the audience was mostly made up of little girls, the handful of boys I spotted were well represented by the male mice on stage too.  Their desire for monster tails, rocket ships and superheros to match their hip hop moves was entertaining and nice to see alongside the very stereotypical girl options of glitter, fairy wings and classical ballet moves. 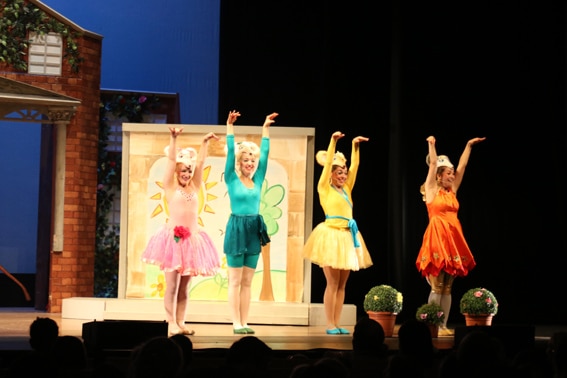 The set was simple and colourful and I was intrigued by the way the small, easy set changes between indoor and outdoor scenes were performed by the characters themselves as they continued in role.  It was a clever way to keep the action on stage fluid and less reason for little bodies in the audience to get bored.

As mentioned previously, the shows running time was 60 minutes and whilst shorter than some I thought this was perfect for my kids.  With no interval it was a decent amount of time to keep the young audience attentive but without going too long that they could become restless and distracted.  There is plenty of clapping along and at the end there is a request for the audience to get up and dance which of course created quite a stir in the crowd.  A nice touch was bringing on tiny ballerina’s from a local club at the end to take part in the final dance scenes. 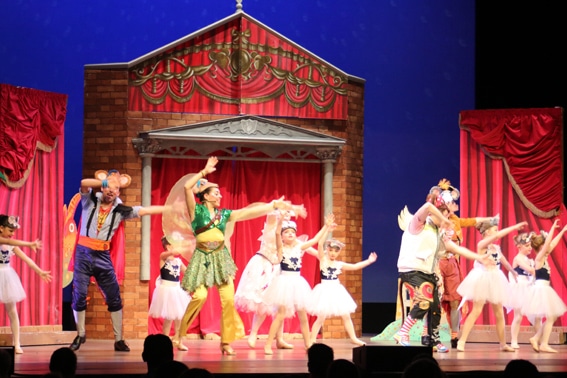 Overall my children had a great time at this show and whilst it was a simple production it was perfect for the age group it was designed for.  If you have a little Angelina fan or a budding dancer in your family then this should definitely be a show to consider seeing.  You’ll have to be quick though!  It’s run in Brisbane finishes on the 12th January.

The national tour and Australian premiere of Angelina Ballerina The Mousical is based on award-winning children’s book series by author Katharine Holabird and illustrator Helen Craig. Angelina Ballerina was first launched in 1983 and has since garnered huge international acclaim, with over 20 books published and an animated television series broadcast in Australia, UK and US amongst other countries.

COST: A Reserve tickets $39 each (plus booking and transaction fees).

BOOKINGS: Tickets on sale to the general public NOW through www.qpac.com.au or on 136 246.